It is probably safe to say that the football teams opening their 2019 season this weekend would rather win than lose. But will a win mean success as the season moves forward? Could a loss actually be a positive?

That’s one of the great things about sports: you never know. Not the next morning anyway. But over the course of a season it is very possible that what happens in week one charts the course for a team’s fortunes the rest of the year. 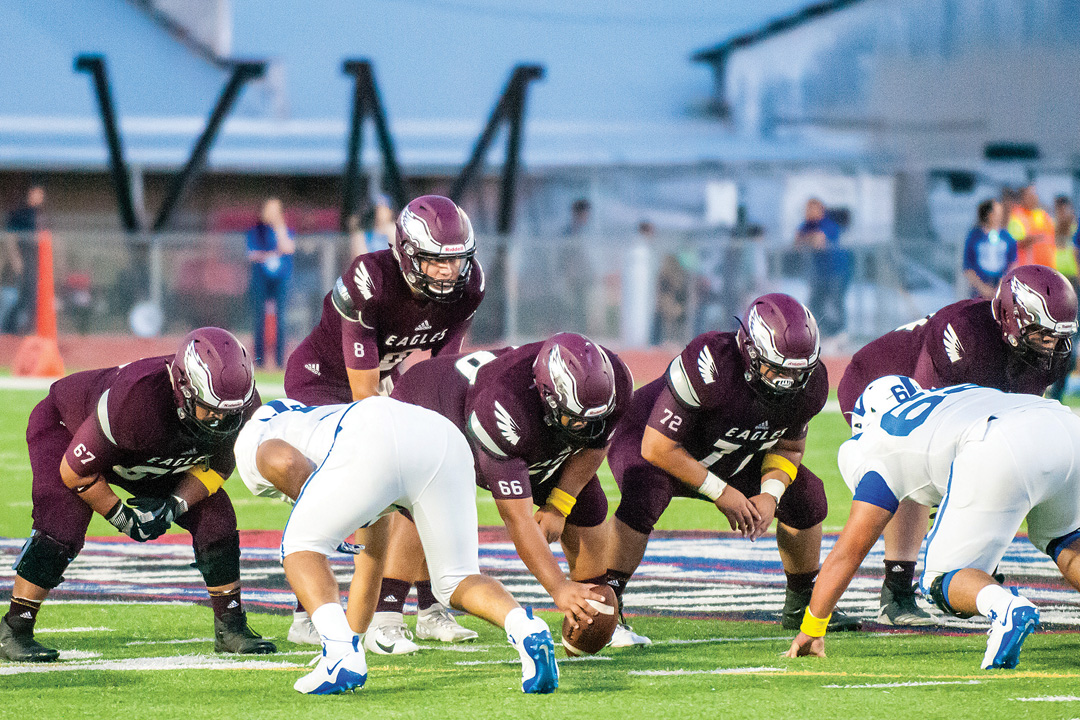 Last year’s Battle of Conway, the annual contest that pits Mission High against Mission Veterans, is a case in point.

Veterans entered with most of the hype. A senior led squad, six consecutive playoff appearances and a four game winning streak over their sister school to the south.

Mission hadn’t recorded a winning season in five years.
The Eagles came away with a 24-12 victory. That win was followed by two more and an eventual eight win season that ended with their first playoff appearance since 2012.

Mission High coach Koy Detmer reflected on the win and its effects.

“It had a big impact,” said Detmer. “For our kids to get out there and have success in that first game really helped us gain momentum early.”

Eagles senior Rey Garcia talked about the game from the player’s perspective. “It made us realize how much we had progressed (from 2017). It set the tone for where we wanted to be.”

The Patriots righted the ship after the loss. In fact they didn’t lose again until December. That included twelve straight victories that didn’t come to an end until the Regional Final, which made the Patriots one of the last eight teams standing in UIL Class 5A Div. I.

Veterans coach David Gilpin remembers the loss to Mission all too well.

“It was an eye opener,” he said. “We understood that we had to be on point when we stepped on the field and I think we were for the rest of the year.”

Patriots senior Danny Cantu spoke on the player’s reaction to the loss. “It sparked us up,” he said. “It put a chip on our shoulder (but) we came out strong the rest of the year and it paid off in the end.

So what should we expect from tonight’s game? Here are some of the things we know heading to kickoff.

Both teams come in with high expectations. Mission returns a number of starters from the 2018 squad and with a seven year playoff streak going, don’t expect the 2019 Patriots to go away quietly, if at all.

2019 has already started off well for both teams too. The Eagles scored early and often in their final scrimmage last Thursday against Mercedes. The Patriots showed a lot of firepower of their own against Sharyland Pioneer in their only preseason test last Friday.

Each team has returning talent poised to make their mark on the game. For the Eagles the vast majority of those players are on the offensive side of the ball. Sophomore quarterback Jeremy Duran was the district Offensive Newcomer of the Year in 2018. Fullback Andrew Maldonado (Jr.), tight end Garcia (Sr.), and guard Steven Alvarez (Sr.) were first team selections. Receiver Steve Villarreal (Sr.), running back Horacio Moronta (Sr.) and center Lyvan Rodriguez (Sr.) made the second team.

The Patriots also have a few returning players who received district recognition for their efforts last year. Receiver AJ Gonzaque (Jr.) was the district Co-Offensive Newcomer of the Year. Running back Cantu (Sr.) made the first team and Freddy Trujillo (Jr.) shared second team honors at kicker.

At quarterback expect to see a couple of sophomores. For the Eagles, Duran was used often last year as a freshman and eventually became the full time starter late in the season. Veterans will turn to Ricky Reyna, who spent most of last season leading the Patriots freshmen squad to a district title.

Let’s not forget about the two coaches either. Detmer has done an admirable job following in his father’s footsteps and bringing the Mission program back to life. Listening to him talk about quarterback play and building up a team was enlightening to me as I prepare myself for covering games this season.

Gilpin brings a brand of optimism and enthusiasm second to none and his record of success speaks for itself. After our interview last week I was ready to put on a uniform again.

But let’s remember this too. It’s still the highly competitive Battle of Conway.

“It doesn’t matter who has what coming back, what their records are,” said Detmer. “It’s always going to be a tough game.”

Many of the same things can probably be said about tonight’s other Big 7 head-to-head match-up between La Joya and La Joya Palmview taking place just a few miles west of the Mission – Veterans clash.

Two rivals that had good runs in 2018; each team expecting more of the same this year.

La Joya won the week one opener last year 39-19 and then their next two. They stayed in contention for a post season berth all the way to the last week of the regular season before falling short.

District 30-6A Co–Offensive Player of the Year Eddie Villarreal (Sr.) returns to lead the Coyotes at running back for his senior year as do first team All-District linemen Alex Rodriguez (Sr.) and Remi Duran (Sr.). Senior Linebacker Daniel Salinas was one of three players chosen as Defensive Newcomer of the Year for the district.

La Joya coach Ruben Farias spoke on the impact opening the season against a rival can have.

“It’s two-fold,” he said. “The boys get up for (this game) and play at a higher level because of it, but we would hate to lose a key player to injury from it.”

Farias noted that he was pleased with how his offense was moving the ball in their two scrimmages and the adjustments his young defense was making to playing at the varsity level.

Palmview responded to last year’s loss with two straight wins to open district play on their way to their first playoff appearance since 2016.

“It is a not a district rivalry, so there is less pressure,” said Requenez. “It is not a game that will make us or break us.”

Requenez went on to say how he wants his team to have a good showing, stay healthy, and have fun.

Both games are scheduled to kick off tonight at 7:30 pm; the Eagles vs Patriots game at Tom Landry Stadium and the Lobos vs Coyotes game at LJISD Pack Stadium. The Patriots and the Coyotes will be the home teams.

Football is back. Let’s hope it’s a fun year for all.