They say the definition of insanity is doing things the same way you’ve always done them and expecting different results. In other words, if you want things to change, you should probably do something different to help bring it about.

Change was definitely in the air Tuesday morning as I watched the Juarez-Lincoln Huskies football team prepare for their 2019 season opener against Rio Hondo. That wasn’t a typo. It was Tuesday morning. 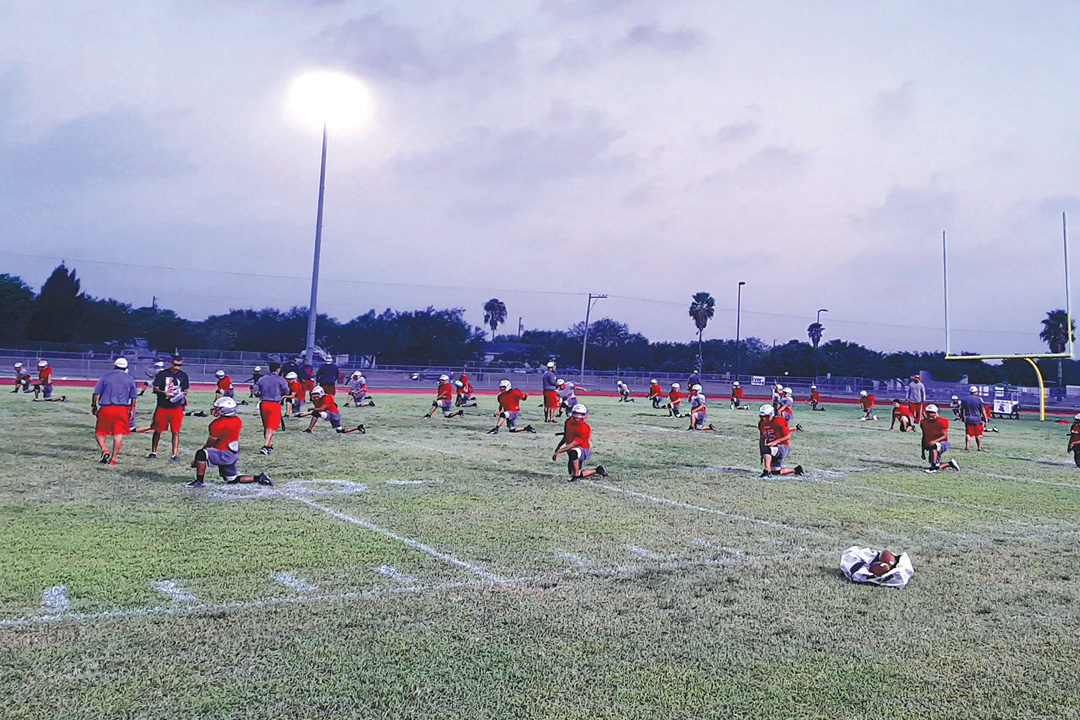 The switch in practice times is just one of a number of things eighth year coach Tomas Garcia has implemented this year to try and turn the fortunes of the Huskies around from a 0-10 season in 2018.

The offense will have a new coordinator, a new look and a new philosophy.

“We’ve opened it (the offense) a bit more,” said Garcia. “We’re passing the ball a bit more which we’ve never done, but we like the weapons we have back on offense.”

Garcia said he hopes to utilize the speed of senior receivers Luis Flores and Isaac Villanueva, both two-year starters, by getting the ball to them in the open field and making them become playmakers.

Villanueva likes how the changes are going so far.
“The progress we’ve made is pretty good,” he said. “The two scrimmages have really shown that. It’s all really falling together the way we had hoped.”

The task of getting those two the ball this season will fall into the hands of senior quarterback Josh Briones who returns as the team’s starter after taking over in an injury situation last year.

“He (Briones) has really looked good in our two scrimmages,” added Garcia. “He is not looking anything like last year. This year he has confidence and a little swagger.”

The offense has shown the ability to move the ball and put it in the end zone during their two preseason scrimmages against Mercedes and La Grulla.

“We’re excited about the offense right now,” said Garcia.
The Huskies defense will be different this year too, as in different faces. Graduation and injuries mean that the defense will have nine new starters, mostly in the defensive line and linebacker positions.

Despite the numerous newcomers Garcia was impressed with how they have performed so far this year, especially in the team’s second scrimmage against La Grulla.

“They surprised me. They played really well,” said Garcia. “They were all over the place and I was very excited because we are so young. Overall our defense came to play against La Grulla. It was a major difference from the first scrimmage to the second.”

Finally, several of the Huskies’ players commented on what they see different between this year and last.

“We have more senior leadership on both offense and defense,” said Albert Batres, a senior defensive back who is one of the two starters returning for the defense.
“It all comes down to our seniors and how we lead,” said Villanueva.

To a man all of the players commented on how they are looking forward to getting a win to help get the season off to a good start.

The Huskies will be tested early. Tonight’s opponent (Rio Hondo) was a playoff team last year. So were the team’s next two non-district opponents (Sharyland Pioneer, Edinburg). The Huskies open district play against PSJA North, another post season qualifier from 2018. Three of the first four games are on the road.

In addition to PSJA North, the rest of the Huskies’ District 30-6A opponents are no pushovers either.

“It’s going to be a tough district,” said Garcia. “Our district has some huge kids, and we don’t. So we have to utilize our speed and quickness and put (our players) in the right positions for them to be successful. Our non-district games will help get us ready for that.”

And just because the Huskies went all of last season without a win means you should not count them out this year. Several of those losses in 2018 were decided by five points or fewer and three of the close ones were against opponents that eventually made the playoffs (Sharyland Pioneer, PSJA North, Mission). As is oftentimes the case when teams struggle, injuries played a major role in the Huskies’ demise.

“Even with the injuries some of the kids stepped up and we were able to be, not only competitive, but we were in those games with a lead towards the end,” said Garcia.

Throughout it all Garcia has remained optimistic.

“We’ve been able to put two good units together offensively and defensively and I like what I see from this young group of kids.”

And who knows; maybe all those early morning workouts will result in some late game wins this year.

The Huskies will be opening their season tonight at 7:30 as the visiting team against the Rio Hondo Bobcats.