Two members of “Los Mickys,” a rotating cast of criminals that robbed drug traffickers in Hidalgo County, took the case against them to trial Monday.

Testimony in the case against Marin Macrin “Filtro” Cerda, 32, of Mission and Jose Miguel “El Mickey” Montemayor, 28, of Mission started Monday at the federal courthouse in McAllen. With dozens of witnesses, the trial could last until mid-September. 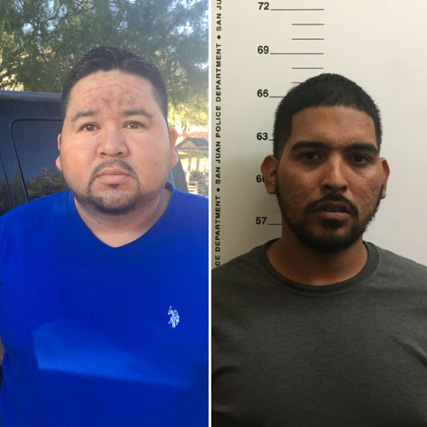 Assistant U.S. Attorney Roberto “Bobby” Lopez Jr. told the jury that Marin Cerda, Montemayor and other members of Los Mickys targeted drug traffickers in 2016 and 2017, when they robbed stash houses and committed a string of carjackings.

“This isn’t just a random coincidence,” Lopez said during his opening statement, when he summarized the dizzying array of crimes allegedly committed by members of Los Mickys. “It’s a conspiracy.”

Los Mickys originally worked for the Gulf Cartel, according to McAllen Municipal Court records, which summarize interviews with members of the organization. When the Gulf Cartel splintered, Los Mickys became a “rip crew” and started stealing from smugglers.

In November 2016, members of Los Mickys targeted a drug trafficker named “Indio,” attempting to steal a cocaine shipment, Lopez said. They parked in front of and behind his car, boxing “Indio” in. The resulting shootout sent people who lived nearby scrambling for cover.

They also robbed a man in Citrus City, driving away with a tractor-trailer linked to drug trafficking, Lopez said. Marin Cerda believed the tractor-trailer had a hidden compartment that contained drugs or money.

An incident in June 2017 helped investigators crack the case.

Members of Los Mickys stormed a home in McAllen, searching for cocaine and money, Lopez said. They had the wrong house.

The homeowner called police. While canvassing the neighborhood the next day, a police officer noticed a suspicious vehicle — Los Mickys had returned, looking for the correct home.

If convicted, Marin Cerda and Montemayor face 10 years to life in federal prison.