A defensive safety on the fourth play of the game and a touchdown by Andrew Maldonado on their sixth offensive play of the night got the Mission Eagles out to a quick 9-0 lead in what eventually became a 37-0 victory over crosstown rival Mission Veterans tonight in the 2019 Battle of Conway season opener for both teams.

The Eagles offense has a lot of weapons and they all did their part to put away the Patriots. 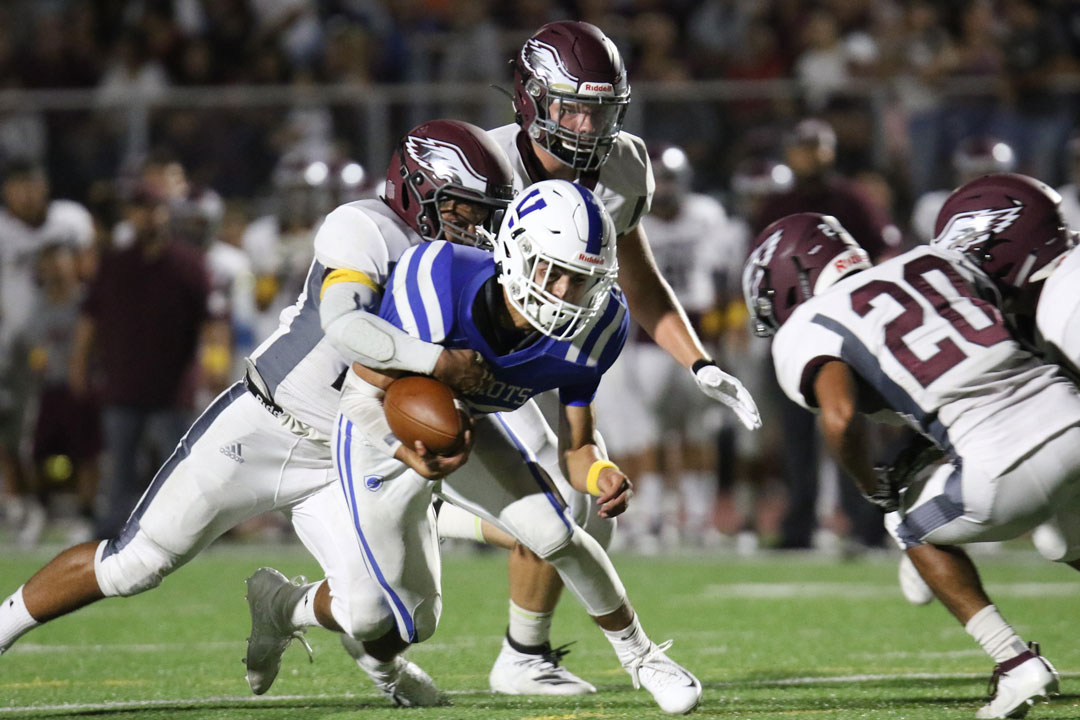 The lead turned to 16-0 early in the second quarter on a 64 yard pass play from quarterback Jeremy Duran to Maldonado.

The Patriots made a move in the second quarter to get back into the game but a blocked field goal ended one drive and a big defensive stop by the Eagles ended another at the seven yard line.

After that stop the Eagles marched 93 yards downfield for a touchdown right before halftime to push their lead to 23-0. That drive was highlighted by two Duran completions to Steve Villarreal. The first went for 40 yards and moved the Eagles into Patriots territory. Five plays later Duran and Villarreal connected again for a 16 yard score.

The second half started with the Eagles using running back Horacio Moronta to punish the Patriots defense. His six yard touchdown run in the third quarter put the Eagles up 30-0.

The Patriots used the arm and legs of quarterback Ricky Reyna to threaten later in the quarter but the Eagles defense rose up again with three straight sacks to force a punt.

Duran found Rey Garcia in the end zone for a touchdown in the fourth quarter to complete the scoring.

All five of the Eagles touchdowns were capped off by extra points from kicker Rene Rodriguez.

Mission High School Coach Koy Detmer credited his team’s mental approach prior to the game as one of the keys to the big win.

“I felt like our guys came out of the locker room ready to get after it tonight,” said Detmer.

Detmer felt that their victory over the Patriots last year played a role too.

“We got the monkey off our back last year (with the 2018 win) and the guys took the field tonight expecting to win versus feeling like we were going to go out there and (just) compete.”

Whatever the reason, it was a dominating performance from start to finish.