A veteran of World War II, Vietnam and Korea, Robert Fisher – now 97 years old – has seen quite a bit in his lifetime.

On Saturday, Aug. 24, 2019, he continued to solidify his place in United States history by signing a genuine B-17G wing skin panel from WWII. A pilot for the 384th Bomb Group during one of the largest global conflicts in history, Fisher always wanted to fly. 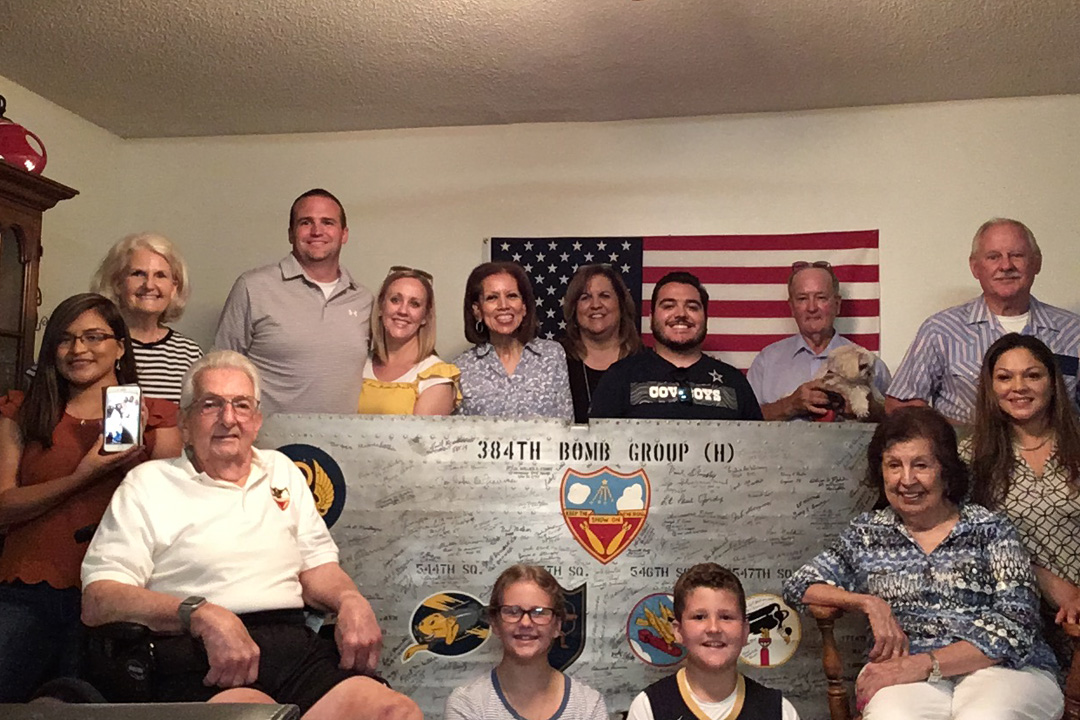 “It became a lot more than just flying, because after combat I never had another flying-only assignment,&rdquo; Fisher said, adding that he always served in technical positions and after returning he was only able to fly on weekends and nights. He also taught upcoming pilots as an instrument instructor, so they would be able to fly a plane based on the controls without any visibility outside the cockpit.

“You just go by the instruments on the dashboard,&rdquo; Fisher said. “That&rsquo;s all. You don&rsquo;t see anything outside.&rdquo;

Originally from Baraboo, Wisc., Fisher&rsquo;s fascination with flight started in his youth when he and his friends would construct cardboard model airplanes. Fisher recalled watching The Spirit of St. Louis (piloted by Charles Lindbergh) fly over the Atlantic Ocean “as a youngster.&rdquo;

“Flying was something new,&rdquo; Fisher said. “Usually we would save some firecrackers from the 4th of July, and when they [the model airplanes] were getting disheveled and not looking good for flying, we&rsquo;d blow them up with some firecrackers and start again.&rdquo;

He spoke about his first flight ever: a birthday present from his parents when he turned seven years old (along with a BB gun). Despite the economic state of the U.S., which was in the midst of the Great Depression, his family was able to give Fisher a memory he still holds close.

“To take the family of four up in a cabin plane, it was $7,&rdquo; Fisher said. “But you didn&rsquo;t make $7 very often.&rdquo;

In his senior year of high school, there was an essay contest asking students to write about why they wanted to learn to fly. Fisher won second place and was rewarded with a short flight over his house, but it was the first-place prize he was originally after: a one-hour flying lesson.

“I did my first aerial reconnaissance – which I later sort of specialized in – on my free flight,&rdquo; Fisher said. “I had my little folding camera, and I leaned out the window and took a picture of my house as we flew over.&rdquo;
Fisher would go on to fly 35 missions during the war, maneuvering their group through countless life-threatening situations. 35 missions was the cap of flights a pilot could take in a bomber plane during WWII, and many didn&rsquo;t make it that far.

“We went to breakfast before [my last] briefing, and one of the officers said ‘Fisher, I say you&rsquo;ll finish up today, one way or the other,&rsquo;&rdquo; Fisher said. “Any one [flight] where I got severe damage, I was happy when I got back.&rdquo;

A resident of Mission for many years after retiring, Fisher was the recipient of the medal of Knight in the French Order of the Legion of Honor in 2017 (which highlighted Fisher&rsquo;s crucial role in the liberation of France from Germany). He now resides in Edinburg with his daughter, Barbara Johnson.

An owner of a winery in France was just a child when the country was liberated, and presented Fisher and his fellow Legion of Honor 2017 honorees with a special bottle of wine called La Lib&eacute;ration, which Fisher still has not opened.

“He was so appreciative,&rdquo; Fisher said. “They all appreciated it so very much, but we were just doing our job.&rdquo;

Johnson has several photographs of Fisher and his time in the service displayed in their home. Sepia and black and white, a less-gray Fisher wearing his gear smiles for the camera.

“Our air power was one of the crucial factors in winning the war,&rdquo; Fisher said. “We all tried to do our part as best we could.&rdquo;

In March 2010, a metal wing stress panel that originally functioned to enclose the fuel tank of a B-17G bomber was donated to the 384th Bomb Group by Carl Scholl. The 384th Bomb Group Veterans Signing Project was born, and Fisher has become the 153rd veteran to sign the panel.

“It&rsquo;s great,&rdquo; Fisher said. “[I&rsquo;m] back with the gang again.&rdquo;

One more veteran is scheduled to sign the panel before it is permanently displayed at the Hill Aerospace Museum at the Hill Air Force Base in Utah. Fisher said he was honored to have his name alongside his fellow service members.

“We knew if we got hit with flack, it wouldn&rsquo;t be more than a few minutes we had left to live,&rdquo; Fisher said. “You might never see your family again, that was the main thing – you wanted to get through it, but you had to do your duty and your job. We had the highest casualty rate of any branch in any outfit in the Air Force, because we introduced daylight bombings, where the gunners could see you from the ground. We tried to joke around as much as we could, but we all knew that it was serious business and we had to get our job done, and we did.&rdquo;

Fisher first felt a call to service when the country needed everyone to band together – and he continued to serve long after.

“It was a united effort,&rdquo; Fisher said. “Everybody in the United States worked together to stop world domination, which Hitler had started. It shows what we can do if we all work together.&rdquo;

When Fisher returned from WWII, he reunited with his best friend from grade school, Pauline. Prior to his deployment he called her and the pair went to a soda parlor, and though they were not dating or “going together,&rdquo; once they got to talking, marriage came up.

Pauline was willing to elope with Fisher in Kentucky, because there was no waiting period, but he remembered that it had been her childhood dream to be given away and married by her father, a Baptist minister. Fisher proposed that they wait until he returned from the service to see if he was physically able to be married, and if he was and they both still felt the same, they would get married. Pauline agreed.

“So I started writing her regularly,&rdquo; Fisher said.
Fisher came home, 35 missions completed, and the couple married soon after. The pair had four children, and Johnson was glad to have had the life they did.
“I feel thankful to be free because of Dad and everyone else who fought for our freedom during World War II and in all the years since (including those that did not make it home to their families),&rdquo; Johnson said. “I was blessed with a wonderful childhood.&rdquo;