Last Thurs. Aug. 22, 2019, the city held a public hearing at the Mission Event Center to present drainage updates to residents who were negatively impacted by the 100-year storm that hit Mission in June 2018. Vasquez and her children were among roughly 50 concerned community members who wanted more information. 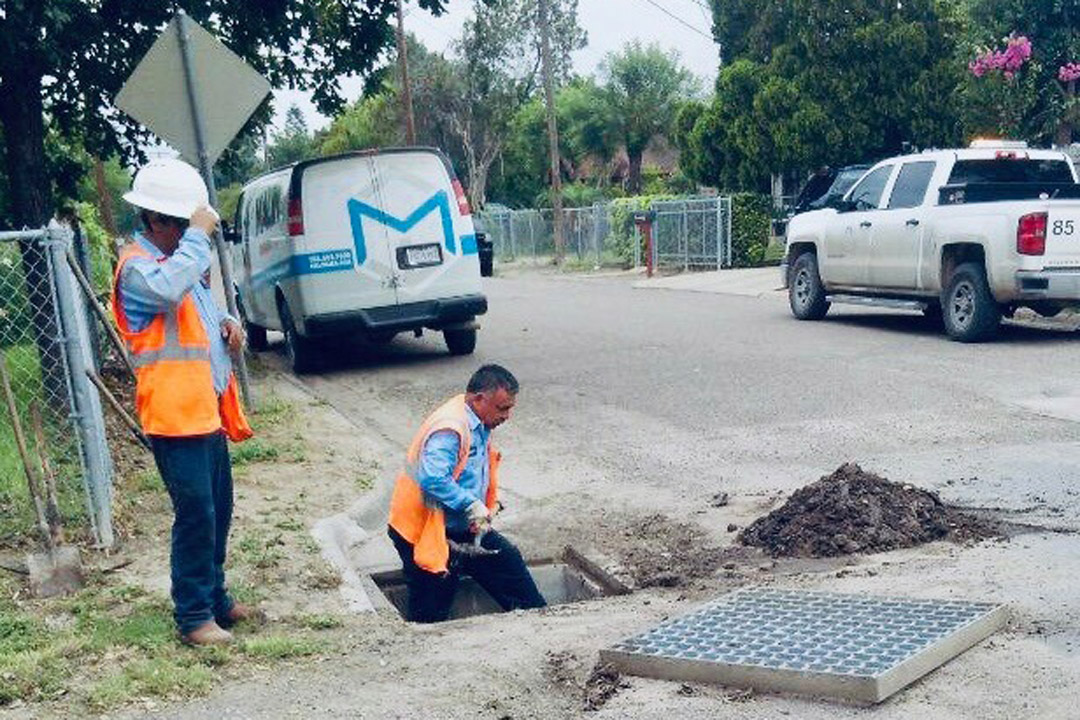 Terrazas showed a powerpoint, complete with infrastructure mapping, photos and videos showing the progress and work Mission has implemented toward drainage so far. The slides included the cleaning efforts and work on Los Ebanos and Bryan Road, Stewart East, the Mission Lateral and the Wilson Ditch.

“Our Public Works department guys have been working diligently, even on the weekends, to try and catch up within the areas throughout the city of Mission,&rdquo; Terrazas said. “We have around 38 outfalls and ditches throughout the city that we maintain on a yearly basis. We try to do it before hurricane season and after every big rain event.&rdquo;

He also noted that the city has trash pick-up programs throughout the year so larger items that people need disposed of can be thrown away properly.

“There are some areas where illegal dumping is happening,&rdquo; Terrazas said. “I just want to reiterate that the city of Mission has programs throughout the year – we have our bulky items pick-up where we pick up mattresses, tires, and pallets – and we also have our landfill just south of the Expressway and Conway where you can go, take these things and dump them.&rdquo;

Terrazas highlighted where the city has been cleaning inlets and noted that they have cleaned out about 75 percent of them. He asked the public to help the department out by not throwing away debris from trimmed trees or cut grass into the inlets in their neighborhoods.

Following Terrazas&rsquo; presentation, Ponciano N. Longoria, the project manager from the TEDSI Infrastructure Group (which is contracted by the city for the drainage assessment), presented their current status in data collection.

He included information about their meetings with city leaders and residents, the grants they have been working on getting with the city, geographic information system (GIS) mapping updates and the next steps they will be taking.

“We&rsquo;re just starting with Phase II with the city – we&rsquo;re going to conduct a hydrologic analysis,&rdquo; Longoria said. “We&rsquo;re checking the land area, the soils, the presentation and how much it rains. And all that information is used to conduct a hydraulic analysis of all the drain ditches, all the smoke pipes that are existing, and we&rsquo;re also looking at if we need to add pipes or create a detection basin. Once we complete that, we&rsquo;ll go into Phase III (identify problems, improve opportunities, formulate an alternative drainage plan and develop an alternate capital improvement plan.&rdquo;

Throughout the presentations various residents could be seen taking pictures of every single slide with their phones, and asked for copies of the maps that they had not received.

Vasquez and neighbor Maribel Mckinsey, were among the vocal few present on Thursday who said they have been calling the city about the drainage situation for years before the severe rainfall. Vasquez, who lives in a neighborhood near Glasscock and 495, had up to nine inches of rain flooded in her family&rsquo;s home last June.

“[Coming home] I was drenched,&rdquo; Vasquez said as she described the day of the flood. “And I just heard [my daughter say] ‘Mom, there&rsquo;s water in the room!&rsquo; So I went to the room and there was water over all their stuffed animals, all over their toys. So I told them to pick everything up and get on the beds.&rdquo;

This isn&rsquo;t the first time Vasquez has come to the city for answers about the state of city infrastructure. At a city council meeting held following the storm, Vasquez, still wearing her scrubs from work, made her opinions on how the city handled it known.

She stated that her son Jose calls their house “the flooded home.&rdquo;

“I still get emotional about it because he was four [years old] when it happened,&rdquo; Vasquez said. “He asked me that night, ‘Mom, are we going back to our flooded home?&rsquo; and it hurt, because we had just bought the home the year prior.&rdquo;

Vasquez said that her family&rsquo;s house was not in a designated flood zone according to maps provided by Hidalgo County, and then June 2018 happened.

As the water rose, Vasquez told her children to pick everything up and get to her room. They managed to save a lot of their shoes and their father&rsquo;s boots, but the house needed to be gutted when it was all over.

Vasquez, along with residents from across the city, made their concerns known. She noted that ever since that storm in June they have needed to renovate the majority of their home.

“I call Randy [Perez] when it rains,&rdquo; Vasquez said. “And I ask him, ‘what are you going to do? Are you going to have rescue there already?&rsquo; Because my street floods with 5 minutes of downpour.&rdquo;

Community members stated that they have been calling the city every time it rains because the drainage has not improved at the rate they feel comfortable with. Mayor Armando O&rsquo;ca&ntilde;a took the stage with Terrazas to address concerns from the citizens.

“Obviously we cannot design a system with the tax rate we have to have a flood-free Mission,&rdquo; O&rsquo;ca&ntilde;a said. “A flood-free Mission is extremely expensive, and it&rsquo;s not going to happen, but we&rsquo;re looking at moving our standards. We&rsquo;re prepared for a 5-year or a 10-year plan and our protocols were designed for that – now we&rsquo;re talking about a 50-year range and a 100-year range to be able to change those protocols.&rdquo;

O&rsquo;ca&ntilde;a and Terrazas gave their personal cell phone numbers out during the hearing, asking citizens to call with any concerns. O&rsquo;ca&ntilde;a also asked that his contact number (956) 222-5739 be published so everyone in the city could have access to help when needed.

“We&rsquo;re here to serve the citizens,&rdquo; O&rsquo;ca&ntilde;a said. “We want to make Mission a place where these traumatic experiences don&rsquo;t become a long-term problem for your family or any other citizens of Mission.&rdquo;

Vasquez noted that while they may not be aware of the entire process of fixing the infrastructure, residents wished the city acted on it sooner.

“I feel like it was a little delayed,&rdquo; Vasquez said. “I feel there were a lot of grey areas, really. Let&rsquo;s see if they follow through. I feel like it&rsquo;s just a band-aid effect.&rdquo;