In this pass-happy era of football, it may be hard to believe that a football team could throw only two passes in a game, complete only one for a grand total of five yards and still win, but that is exactly what the La Joya Coyotes did last week against the Palmview Lobos. How did they manage to pull this off? By rushing for just under 300 yards and by featuring their second team All-State running back and their two time District 30-6A co-offensive MVP, Eddie Villarreal.

While the Coyotes did have to come from behind to open their 2019 campaign with a one-point win, 13-12, the fact is that La Joya could’ve very easily tacked on another touchdown had head coach Reuben Farias not chosen to have his quarterback take a knee from inside the Lobos’ 10-yard-line late in the fourth quarter instead of going for the score. Regardless, a win is a win and if the Coyotes are going to make a habit of winning, it will almost certainly be on the legs of Villarreal. 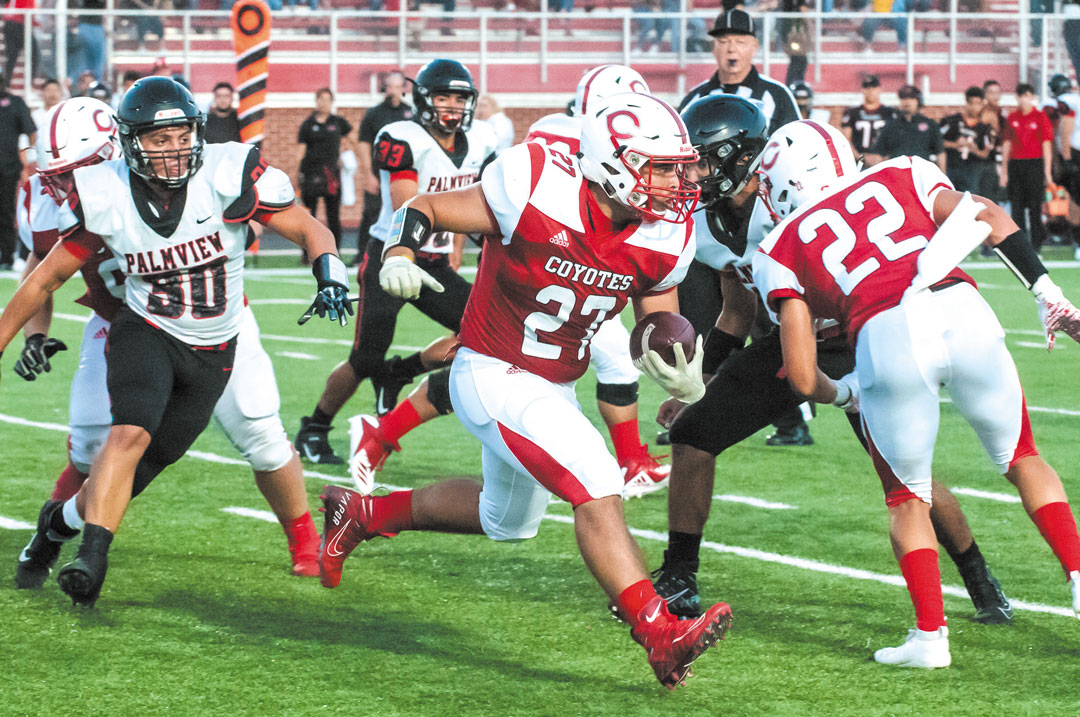 With Villarreal’s 213 yards rushing on 25 carries accounting for over 70% of the Coyotes total yards against the Lobos, it’s easy to see why Farias’ offensive game plan consists of Villarreal left, Villarreal right and Villarreal up the middle.

“Eddie is the backbone and the heart and soul of our team,” Farias said shortly after the Palmview game. “He puts the team on his back and he’s going to run. He’s a physical runner which means that he is not going to shy away from contact. Very seldom does he turn the ball over. Very seldom does he have plays for loss of yards.”

One might think that the fact that all 11 players on the opponents’ defensive units know that Villarreal is going to be handed the ball more often than not would make it difficult for him to rush for positive yards time after time, but as Farias explained, he always finds a way to turn every play into positive yards; regardless of where he first gets hit.

“Even if he gets hit behind the line of scrimmage, he’s going to get at least one positive yard,” Farias added. “That’s the big plus for him because in the summer he does cross-fit and he works his rear end off just to try putting himself in this situation.”

While it has been said that statistics can be made to prove anything, in Villarreal’s case, his stats speak for themselves. After all, when one player accounts for over half of his team’s total yards and over 60% of his team’s touchdowns, that player is as Farias put it, “…the backbone and the heart and soul…” of his team.

At 5-foot-9 and 235 pounds, Villarreal is not the biggest running back in the Valley, yet he is one of the best, if not the best. When asked what it is he likes the most about being a running back, Villarreal said, “I like hitting the holes and taking advantage of every moment. I just love it.”

Last year, Villarreal and the Coyotes were on track to make the playoffs but a 0-3 finish left them on the outside of the UIL state playoffs looking in. With this being his senior season, Villarreal is determined to lead his team into the playoffs.

“With the new rule that we have allowing us to practice one hour every week, we’ve been showing up in the offseason and that has helped us a lot to improve offensively and defensively,” Villarreal said. “But we’ll need to execute every day in practice and finish every game if we’re going to make the playoffs.”

While he did score both of the Coyotes’ touchdowns against the Lobos, Villarreal was not satisfied with the way his team played in their season opener. However, the fact that he took the time to slap the hand of every Coyote fan that lined up along the bottom row of the bleachers after the game, was a testament to how much he appreciated the fact that the Coyotes’ fans far outnumbered the Lobos’ fans in the stands.

“I think they sold 1,000 student tickets for this game,” Villarreal said. “It feels great to see so many people come to support us. We were down in the first half but as soon as we got up, the fans showed that they hadn’t given up on us. It wasn’t a good game but we gave the fans a show in the second half and we prevailed.”

In a game that is scheduled to kick off at 7:30 tonight, Villarreal and the Coyotes will be traveling to Roma to take on the Gladiators, a team La Joya defeated 49-0 last year.