Last Friday, leaders from across the RGV gathered at the Pharr Events Center to discuss a proposed new trade agreement between the United States, Mexico and Canada.

U.S. Senator John Cornyn and U.S. Representative Henry Cuellar were part of a panel held during the USMCA forum (hosted by RGV Leadership and Futuro RGV) on Friday August 30, where they spoke on the importance of international trade in the Rio Grande Valley. 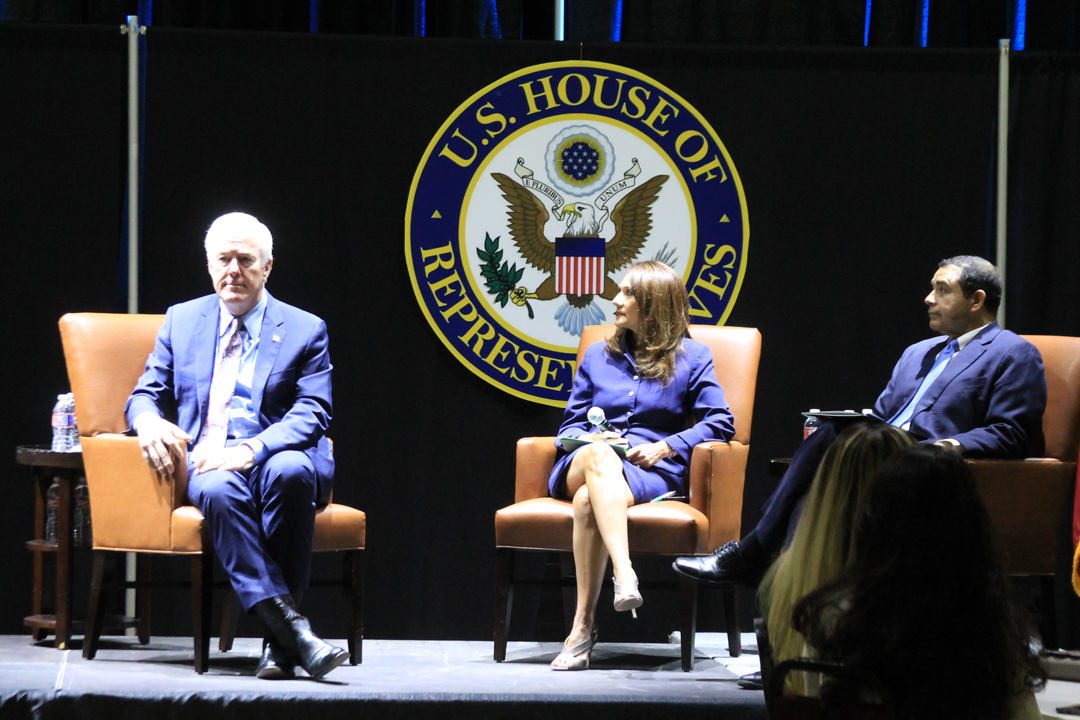 Prior to their panel, attendees of the function heard presentations and panel discussions from RGV leaders and educators with experience in trade in order to speak on the local perspective of what the proposed “new NAFTA&rdquo; means for the Valley.

The United States-Mexico-Canada Agreement (USMCA) was created in Sept. 2018. It has been proposed as an alternative to the New American Free Trade Agreement (NAFTA), which was enacted in Jan. 1994.

In May 2017, U.S. Trade Representative Robert Lighthizer told Congress President Donald Trump would enter into negotiations with Canada and Mexico with respect to NAFTA. Later that year, the U.S. trade representative “heard directly from over 140 witnesses, who provided testimony on a wide range of sectors, from agriculture to manufacturing and digital trade, and represented industries, workers, farmers and ranchers.&rdquo;

At the G20 Leaders Summit in 2018, Trump, then-Mexican President Enrique Pe&ntilde;a Nieto and Canadian Prime Minister Justin Trudeau signed a draft of a new USMCA intended to replace NAFTA, however Congress has not passed USMCA.

Speaker of the House Nancy Pelosi formed a nine-person committee in the house to review the impact assessments on trade, labor and the environment as well as an enforcement plan.

Negotiations have been agreed to be kept confidential and classified by all three countries, and are therefore not open under the Freedom of Information Act. Classified information includes “the negotiating text, proposals of each Government, accompanying explanatory material and emails related to the substance of the negotiations.&rdquo;

Sergio Contreras, the president and CEO of RGV Partnership, acted as the master of ceremonies during the forum. He spoke highly of informing the public about what trade means here.

“Gov. Abbott stated that our unemployment rate was close to 22 percent before NAFTA,&rdquo; Sergio Contreras said. “Fast forward to today: some of our cities are between four and seven percent. According to a study commissioned by IBC Bank, in 1993 (the year before NAFTA went into effect), total trade between the U.S. and Mexico was at about $81 billion. In 2018, the study finds a jump from $81 billion to $611 billion. This equals a 650 percent increase.&rdquo;

UTRGV Vice President of Governmental and Community Relations Veronica Gonzales acted as the moderator for the second panel discussion, which included Senator Cornyn and Rep. Cuellar. Both spoke about the bipartisan efforts that have been taken to work on the USMCA and the impact it can have on business.

“Business confidence is really important, because investors are not going to make a decision if they can&rsquo;t plan or think circumstances will radically change,&rdquo; Cornyn said. “The good news is NAFTA is the law of the land until it&rsquo;s replaced, so I think that will provide some comfort.&rdquo;

If approved, trade will likely increase in the southern and northern regions of the U.S. Cuellar said the area will be ready for an increase when it happens.

“The state of Texas is growing very fast,&rdquo; Cuellar said. “Last time we grew by 4.3 million individuals, and this census we&rsquo;re going to go up, so we have to get money. It&rsquo;s not only the population, it&rsquo;s the cargo. There&rsquo;s no other place than Texas when it comes to trade.&rdquo;

Dr. Salvador Contreras, an economist and professor at the University of Texas Rio Grande Valley, gave a presentation on NAFTA and the new USMCA. He spoke about the transition from NAFTA to USMCA, and what&rsquo;s next.

The USMCA will keep much of the same dispute resolution apparatus from NAFTA, and will continue the enforcement of labor and environmental provisions. Canada will maintain the supply-management system for dairy.

Dr. Contreras pointed out that the Laredo district accounts for half of all trade that happens between Mexico and the U.S., so NAFTA has had a huge impact on the RGV.

“From 1994 to 2018, personal income increased from $9 billion to $34 billion, increasing four times in the region,&rdquo; Dr. Contreras said. “We also see that wages have increased, and the median income worker has seen wages increase from about 25 percent.&rdquo;

He also spoke about what would happen to the U.S. if the country is unable to come up with an agreement.

“187,000 exporting jobs will be lost,&rdquo; Dr. Contreras said. “The U.S. will have some 300,000 fewer jobs at the end of the year which we exit the trade deal. U.S. businesses and farmers will face some $16 billion in additional costs to tariffs, and consumers will face some $7 billion.&rdquo;

“We&rsquo;ve got a very short window that we can possibly ratify the USMCA,&rdquo; Patridge said. “So what we need to do as a business community and as individuals is we all need to be contacting our Texas congressional delegation as well as any other people that could encourage our members of Congress to bring the USMCA up for a vote and ratification.&rdquo;

If the USMCA is not passed, the country will continue to operate under NAFTA – however Patridge pointed out that a single letter from the President could pull us out of NAFTA in six months.

“Is he going to do that? I don&rsquo;t think so, because that would result in all kinds of chaos,&rdquo; Patridge said. “However, the fact that it can be done – what we&rsquo;re seeing among the companies that we&rsquo;re working every day, is they have projects that they want to move forward with.&rdquo;

“Because of that uncertainty, they are frozen in time, they are not moving unless something happens with USMCA,&rdquo; Patridge added. “If we do [pass it], we see huge potential opportunities for the border communities, particularly the Rio Grande Valley.&rdquo;