With 176 students out of 857 successfully being named AP scholars in the previous school year, the Sharyland Independent School District is recognizing these individuals for their achievements.

During their previous school board meeting, Sharyland trustees congratulated 176 students from all three of their high schools. According to Jennifer Martinez, district director of assessment and advanced academics, this is the highest number of Sharyland students recognized as AP scholars in the last five years. 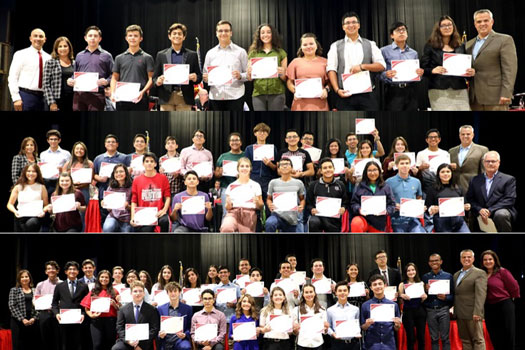 The Advanced Placement Program (AP) enables students to pursue college-level courses while still in high school for college credit, according to Collegeboard, the non-profit organization that provides AP programs.

The program consists of college-level courses developed by the AP Program that high schools can choose to offer, and corresponding exams that are administered once a year.

The highest recognition is a National AP Scholar, given to those who receive an average score of 4 or more on all AP exams taken and scores 4 or higher on at least eight of these exams.

“It’s a great honor to have so many students and it’s a great way to promote our academics,” Martinez said. “We’re more than just athletics. This past year our athletes got 19 out of 21 district championships so we are phenomenal when it comes to athletics, but this shows we are also phenomenal in our academics.”

“With open enrollment happening in the district and students and parents being able to choose what district they can go to, we really want to make sure that everybody knows Sharyland and what it is we can do,” Martinez said.

To continue recognizing these students, each high school will be having a small reception for their honor on Monday where the parents will be given a yard sign bearing the district’s logo and the student’s AP Scholar recognition. Parents will be urged to post photos of their child with the signs in their yard so the district’s social media team can share them.

“It’s just good publicity for the district so others can know what students can do at Sharyland,” Martinez said. “The best part is that these students don’t just study all the time. They’re well-rounded individuals with great time management skills who can handle college courses and extracurricular activities. It’s something that will look great on their college applications.”