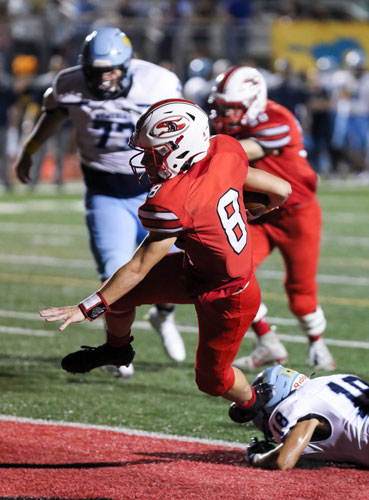 With two of the Big 7 teams having played their Week 3 games last night, the Mission Veterans Patriots and Brownsville Veterans and the Juarez-Lincoln Huskies at the Edinburg Bobcats, and with four of the remaining Big 7 teams going head to head against each other, there are only three games featuring one or more Big 7 teams on tonight’s schedule. And with the Mission Eagles at the Sharyland Pioneer Diamondbacks game being our Game of the Week, which is being previewed separately, we will be taking a look at the other two Big 7 games being played under the Friday night lights here.

Sharyland Rattlers at La Joya Coyotes
In a game played at Richard Thompson Stadium last year, La Joya jumped out to a 31-0 third quarter lead over Sharyland before the Rattlers finally broke into the end zone in the fourth quarter to make the score 31-7; which as it turns out, was the final score of the game. Of course the Rattlers were coming off two hard fought overtime games when they took on the Coyotes last year and while they did lose to Brownsville Hanna the following week, they turned things around quickly after the loss to the Golden Eagles to win all six of their District 31-5A-II match-ups and their bi-district playoff game against San Antonio Somerset.

So far the Rattlers are pretty much replicating their 2018 season with a win over Brownsville Pace and a loss to McAllen Memorial. However while it took overtime for the Mustangs to pull out a win over the Rattlers last year, Memorial dominated last week’s rematch to win in a laugher by a score of 51-10. It’s hard to say at this point if that lopsided score is more of an indicator of how much better Memorial is this year than they were last year or how much worse the Rattlers are, but if Sharyland can bounce back and pull off an undefeated district season this year like they did last, nobody will care how badly they lost to Memorial.

As for the Coyotes, they’re coming off back-to-back wins against the Palmview Lobos (13-12) and the Roma Gladiators (30-6). Against Roma it was junior fullback Rudy Olivarez and junior running back Anselmo Davila who led the way offensively for La Joya. Olivarez ran for 120 yards on 10 carries and scored two touchdowns. One of those TDs was for 73 yards which gave the Coyotes a 16-0 second quarter lead. In total, Davila carried the ball 22 times for 103 yards and one touchdown against Roma.

Defensively, senior free safety Jacob Gonzalez had an interception while sophomore defensive back Salvador Carmona recovered a Gladiators’ fumble for the Coyotes.

So what should the Rattlers’ defense expect from the Coyotes’ offense? The fact that the Coyotes have passed for a grand total of only five yards so far this season should pretty much answer that question. But knowing what a team will do and stopping them from doing it are two different matters. Whether or not Coach Ron Adame’s defense manages to stop Coach Reuben Farias’ running game will go a long way towards determining which team is celebrating and which team is licking their wounds when the game clock ticks down to double zeroes at the end of the fourth quarter.

Palmview Lobos at Brownsville Porter Cowboys
Last year the Palmview Lobos defeated the Porter Cowboys by a score of 35-27. The Lobos went on to post a 6-3 District 31-5A-I record and qualify for the UIL state playoffs in their first season back as a 5A team after spending the prior four seasons as a member of 30-6A.

Against Rio Grande, the Lobos were led offensively by junior running back Carlos Peña who ran all over the Rattlers’ defense for 332 rushing yards on 18 carries and three touchdowns. Incredibly, Peña had touchdown runs of 80, 92 and 62 yards against Rio. Senior fullback Adrian Vasquez scored the Lobos’ two other touchdowns as he had 56 yards rushing on 12 attempts. However, despite the fact that Palmview racked up 493 yards of total offense against the Rattlers, it was not enough to pull out a win in what was a back and forth game which was not decided until a last minute Palmview drive was brought to an end when Rio Grande’s Allen Garcia intercepted a pass with seven seconds remaining on the clock.

Porter is 1-1 so far in this young season with a non-district, overtime win over the Port Isabel Tarpons (21-14) in Week 1 and a district loss at the hands of the Brownsville Pace Vikings (17-14) last week.

While calling this a must-win game for Palmview is a bit of a reach, Coach Margarito ‘Mage’ Requenez certainly doesn’t want to see his Lobos go 0-2 in district play.

Doing so will make it extremely difficult for them to make it five playoff appearances in the six years of his tenure as the Palmview head football coach.

Both of these games are scheduled to kick-off at 7:30 tonight.