For the third week in a row Sharyland ISD’s Richard Thompson Stadium will be the site of a highly anticipated matchup between two of the Valley’s top football teams.

Harlingen High defeated Sharyland Pioneer in a 42-41 thriller there to open the season on August 30 before McAllen Memorial showed up and beat the Sharyland Rattlers 51-10 last week. 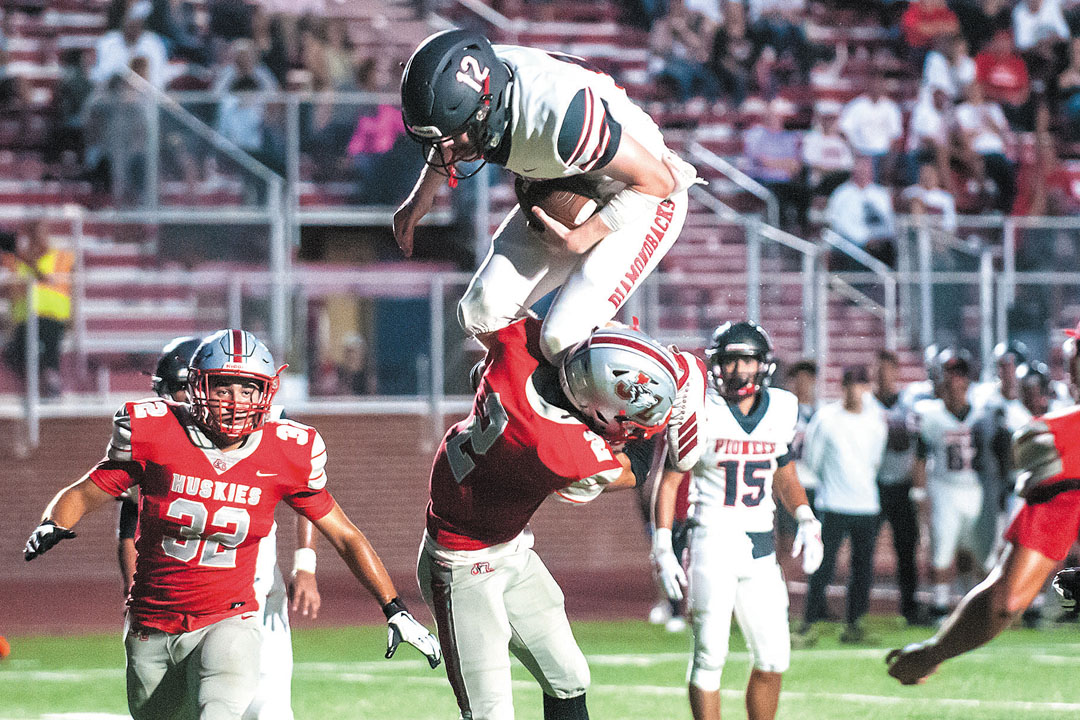 The Mission Eagles (2-0) take the short trip across town tonight in hopes of recording another visiting team victory at the stadium and remain undefeated in the early stages of the 2019 campaign.

It won’t be easy. The Diamondbacks of Sharyland Pioneer (1-1) will be lying in wait when the Eagles swoop in, hoping to strike back after a tough 21-17 loss in their 2018 meeting and attempting to keep the momentum from their big win over La Joya Juarez-Lincoln last week going.

These are two teams with lots of experienced players returning from successful 2018 seasons. They both have the potential to win their respective districts this year and go on long post season runs.

Most of the stars from last year’s meeting are back too.
Mission quarterback Jeremy Duran was called to duty early in that contest when their starter went down due to injury. His two touchdown passes put the Eagles up 14-3.

Horacio Moronta’s late fourth quarter touchdown run secured the victory for the Eagles after the Diamondbacks had rallied to take a 17-14 lead.

Sharyland Pioneer quarterback Eddie Lee Marburger was a part of that rally.

Marburger passed for 169 yards with a touchdown to Lavar Lindo and rushed for 51 yards and a TD. The Diamondbacks drove into Mission territory after Moronta’s score looking to win the game before the Eagle defense held.

Both offenses have started 2019 on fire. The Eagles have scored 92 points in their first two games while the Diamondbacks have totaled 98.

For Mission, Duran has eclipsed 200 yards passing in both of the Eagles victories, including a three touchdown performance in their season opening 37-0 win over Mission Veterans. Mission doesn’t just strike from the air either. Moronta has run for over 100 yards in each of the team’s first two games and scored four touchdowns in a 55-8 win last week over Donna North.

Steve Villarreal had a 100 yard receiving performance and a touchdown against Donna North.

Mission coach Koy Detmer likes how his backs have performed and credited Duran with getting multiple players involved in the passing game.

The Diamondbacks are living up to their name, utilizing a lethal combination of Marburger and an array of receivers for him to choose from.

Marburger has passed for over 300 yards in each of Pioneer’s first two games and thrown for a whopping 11 touchdowns. Six of those came against Harlingen. Five different receivers have scored via a Marburger throw so far this year. Allen Davila has caught three touchdown passes. Luke Padilla, Tristan Castillo, Gavin De la Garza and Lindo all have two apiece.

Marburger keeps defenses on the defensive with his legs too. He rushed for 131 yards against Harlingen.

Pioneer coach Tom Lee spoke about his offense. “We’ve got a good group and we’ve been clicking early,” he said.

Defensively the edge should probably go to Mission. The Eagles have given up only 8 points so far this season and held each of their opponents to less than 200 yards per game.

“They’ve been outstanding from the start,” said Detmer. “That shutout (against a high powered Mission Veterans offense) was outstanding.”

Donna North managed only 88 yards against the unit last week

Amazingly the Eagles defense has yet to record a takeaway, but Detmer credited their ability to get the ball back to the offense, often in favorable field position.

On the other side don’t discount Pioneer’s ability to stop you despite having surrendered 70 points in their first two games.

“When you have an offense that scores as much as we do it puts them (the defense) on the field a lot,” said Lee. “But it’s a good problem to have.”

The Pioneer defense has recorded six takeaways in their first two games. A fumble recovery along with a couple of fourth down stops against Juarez-Lincoln in the first quarter last week created a short field for the offense which, in turn, led to 18 points in their 57-28 victory.

Despite the early season success, both teams’ coaches know there is plenty of football left to be played this year.

For Mission, this is their last non-district game. A bye week follows and then the highly competitive District 30-6A games begin.

Still Detmer is not looking ahead. “We’re still taking it one week at a time and looking for improvement,” he said. “We don’t want to see the same mistakes showing up (week after week).”

Coach Lee, a Mission High grad and former coach of the Eagles, is putting this game in perspective too.

“We’re both (Mission and Pioneer) just trying to get better each week. We both have aspirations to go far in the playoffs,” he said. “For me that’s what it’s about.”