7th and 8th grade students at De Zavala Middle School took Wednesday morning to memorialize 9/11, even though they weren’t born when the Twin Towers collapsed.

18 years after the tragic event that sent shockwaves throughout the country, campuses in the La Joya Independent School District (including Lorenzo De Zavala Middle School) remembered September 11, 2001 by holding special ceremonies. The ceremony at De Zavala drew the students, along with several family members and parents, and featured civil service police officers, firefighters and emergency medical service providers from the city of La Joya, the city of Peñitas and Sullivan City, along with representatives from Rio Grande Valley EMS. 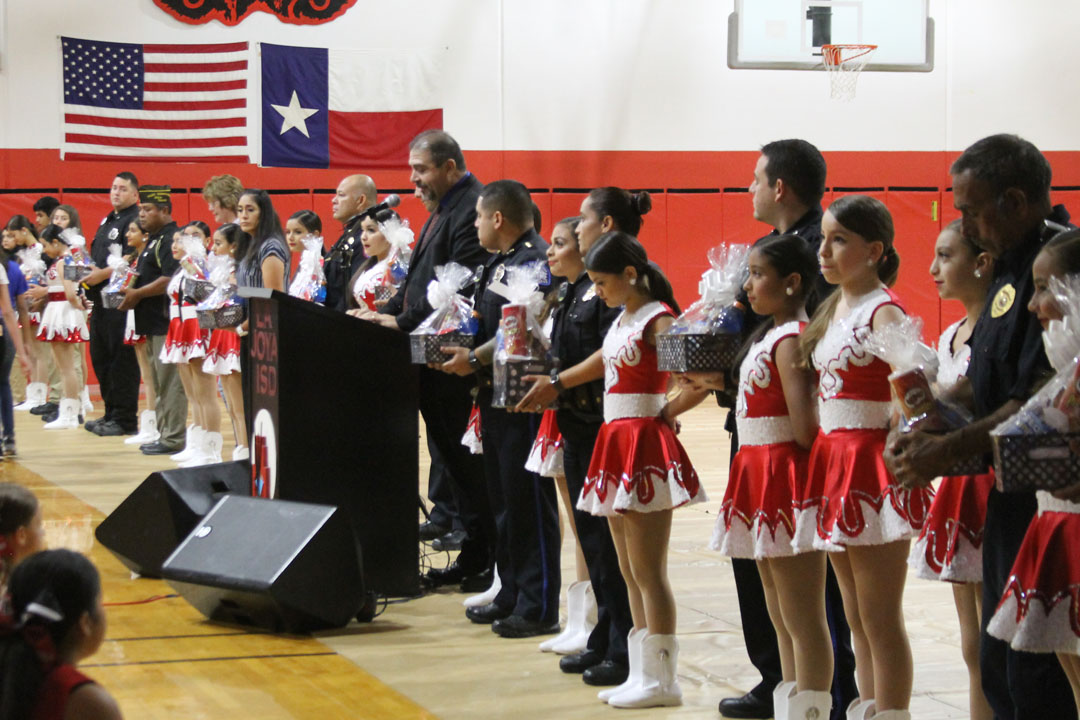 Dr. Antonio Uresti, the principal of De Zavala Middle School, gave the welcome remarks for the 2nd annual Sept. 11 Remembrance Ceremony. He spoke on the importance of remembering 9/11 and the sacrifices made daily by American civil service members, thanking those present.

“Thank you for being here and putting your lives at risk for the benefit of all of us,” Uresti said. “We are forever indebted to your service, and it’s a true commitment to others.”

He noted that De Zavala Middle School was recently designated a leadership school in the district, and because of that they are encouraging students to take on more leadership roles in academics and extracurricular activities.

“Our students basically will be leading this assembly so they can gain experience in public speaking and the different attitudes and principles that are involved in leadership,” Uresti said.

“Our gratitude and pride cannot be overstated,” Fernandez said of the civil service members present.

8th grade student Eduardo Garcia gave a student account of 9/11, and why it is vital for young people of all ages and upcoming generations to be educated on what happened.

“The only knowledge I have of that day comes from what I have read, television, social media and what has been shared by my teachers and family members who lived through it,” Garcia said. “Sept. 11 has been portrayed as one of America’s worst days, and yet it is also depicted as one of bravery and heroism.”

Garcia said he was glad to take a moment to honor those who lost their lives and the brave souls who went after them.

“Today, as we gather to pay our respects for the memories of those who lost their lives, we are also here to honor our local first responders,” Garcia said. “Days like 9/11 help us recognize the commitment and self-sacrifice our firefighters, police officers and EMS providers engage in every day.”

“The attacks on Sept. 11 were intended to break our spirit,” Garza said. “Instead, we have grown stronger and more unified.”

She described the events of Sept. 11, 2001, when terrorists hijacked four airplanes to carry out suicide attacks against targets in the United States, including the North and South Towers that made up the World Trade Center complex in New York City and the Pentagon in Arlington, Virginia.

“A total of 2,996 people were killed in the attacks of 9/11,” Garza said, noting that many of the deaths were of first responders working to save those trapped in the buildings. “As said by former President Obama in 2018, ‘we remember and we will never forget the 3,000 beautiful lives taken from us so cruelly.’ Today we are here to honor the courage of those who put themselves in harms way to save people they never knew.”

The school held a moment of silence following a video presentation and a prayer from members of the De Zavala Fellowship of Christian Athletes (FCA) chapter, and the “taps” bugle call was played.

At the end of the ceremony, the first responders present were invited to the front of the gym to receive gift baskets from the school’s Junior Reserve Officers’ Training Corps (JROTC) in thanks of their continued efforts for the community.

This article originally appeared in the Friday Sept. 13, 2019 issue of the Progress Times.