Junior quarterback Eddie Lee Marburger had another impressive game, throwing for six touchdowns and rushing for another as the Diamondbacks improved to 2-1 with their second straight 50 plus point game. Pioneer’s first score came via a Marburger to Luke Padilla score from 13 yards out that tied the game at seven apiece midway through the first quarter. 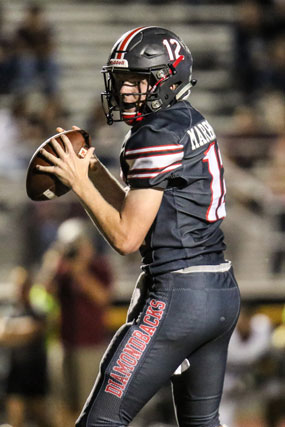 The Pioneer defense did their job too. After giving up the game’s first score on an Andrew Maldonado touchdown run, the Diamondbacks “D” proceeded to force a Mission punt, recover a fumble on a kickoff return and then stop the Eagles on a three and out. Those three stops led to three touchdowns and a 28-7 lead that put Pioneer in control for the rest of the night.

Mission would fight back to cut the deficit to fourteen points on three different occasions before a 20 yard touchdown run from Marburger put the Diamondbacks up 49-28 in the fourth.

A Jay Palacios interception stopped another Mission offensive possession and led to the game’s final score when Marburger connected with JJ Snyman for a 15 yard score.

Maldonado added another touchdown for Mission to start the second half and scored his third of the night on a pass from Jeremy Duran later in the same quarter. Horacio Moronta also had a touchdown run for the Eagles. But, in the end, they just couldn’t keep up with the efficiency of the Diamondbacks offense.

“They (Pioneer) do a great job offensively,” said Mission coach Koy Detmer. “They’ve got some outstanding athletes and some tough matchups. They were able to take advantage of those matchups tonight, so hat’s off to them.”

“Our offense did a great job with the tempo (tonight),” he said. “We are an up tempo offense and we prep that. We feel real confident with our offense going into game situations.”

Bocanegra also applauded the effort put in by the team’s defensive coaches in getting a game plan prepared to counter a powerful Eagles team and in the way the team executed it on the field.

“Overall we’re very pleased with our defense. We played well on defense and we are proud of our defensive players.”

Mission is off next week while Pioneer travels to Brownsville Friday September 20 to take on the Rivera Raiders.