It was a battle between two of the four undefeated teams in District 16-5A-1 and it took place at Tom Landry Hall of Fame Stadium in Mission.

The 2-0 (3-0 overall) Rio Grande City Rattlers, with their top scoring offense in the district heading into the game, came into town to take on the defending district champions, the 2-0 (2-1 overall) Mission Veterans Patriots. 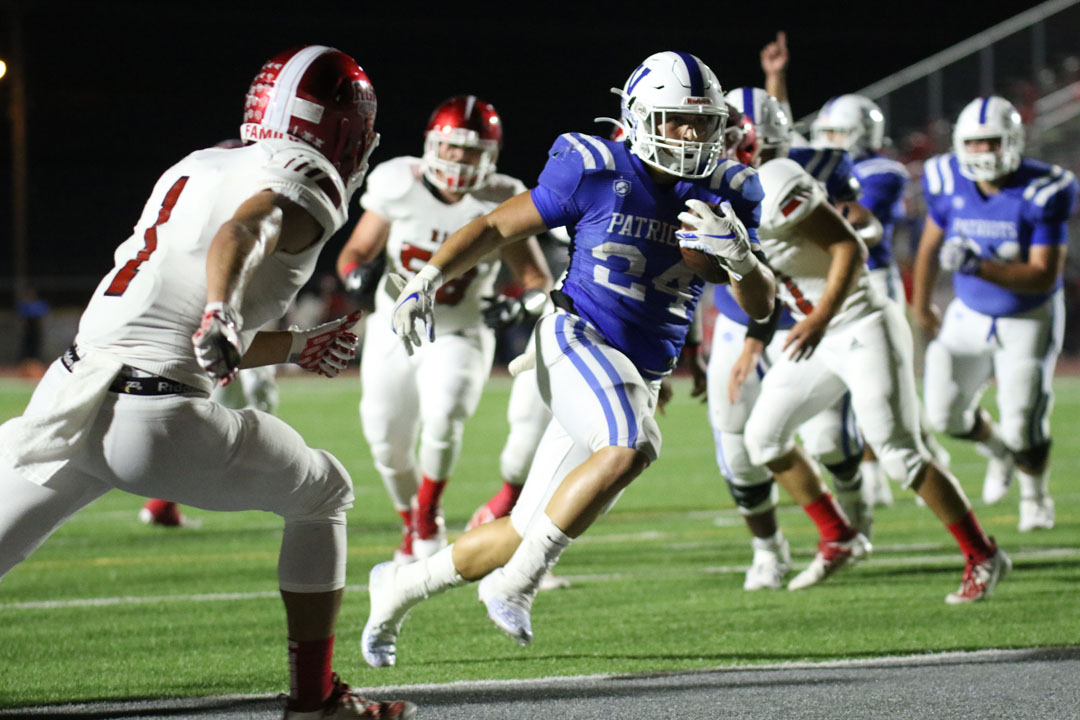 Rio Grande answered with a long drive that ended on a six yard touchdown run at the 7:42 mark of the second quarter. That made the score 14-7 in favor of the Patriots. The Rattlers then tried to catch the Patriots by surprise when they attempted an onside kick, but the Patriots recovered it at their own 46 yard line. However, Mission Veterans was not able to capitalize on the great field position as three incompletions resulted in a three-and-out, forcing the Patriots to punt the ball away.

However, on their next possession, the Patriots would not be denied as they scored on the ground for the first time in the game when Cantu ran the ball into the end zone from 6 yards out for his second TD of the first half.

Then, just as the marching bands were preparing to perform, the Rattlers scored on a 53 yard pass to make the score at halftime, 21-14 in favor of the Patriots.

The only scoring either for either team in the third quarter was a 38 yard field goal by the Patriots’ Alfredo Trujillo to extend the Patriots lead to 24-14 with 1:45 remaining in the third.

Then with 11:10 remaining in the game, the Rattlers got to within 3 points as they scored on a 12 yard run. But the Patriots returned the favor less than three minutes later when Mikey Garcia caught a 2 yard touchdown pass from Reyna on a fourth and goal to make the score 31-21 Mission Veterans. Finally, with only 2:48 remaining on the clock, Mike Gonzaque caught his first TD pass of the game from three yards out to make the final score 38-21 in favor of the Patriots.

After the game, Patriots’ head coach David Gilpin sang the praises of his quarterback and his running back.

“I’ve said this many times, Ricky Reyna is a special player,” Gilpin said. “Ricky Reyna is a sophomore. He’s been in high school for one year and five weeks. He’s played four varsity football games and he looks like a seasoned pro out there. He’s unflappable. If he makes a mistake or misses a pass he doesn’t let it get to him. He just has the poise, and the character, and the work ethic, and the coach-ability that a Patriot quarterback has to have.”

“Danny Cantu was the man tonight,” Gilpin added. “We expect Danny Cantu to be the man. He got over 250 yards the past two games and he only played the second half two games ago. So he’s putting up the yards. He should be around 100 or more tonight. And he’s doing what we expected him to do.”