The PSJA Bears put the rest of UIL District 30-6A on notice Friday night in their district opener against La Joya at the La Joya ISD Stadium as they pummeled the Coyotes 70-14.

Coach Lupe Rodriguez’s squad dominated the game on both offense and defense and showed that despite a 1-2 non-district record to open the 2019 season they are more than ready to defend their 2018 district title. 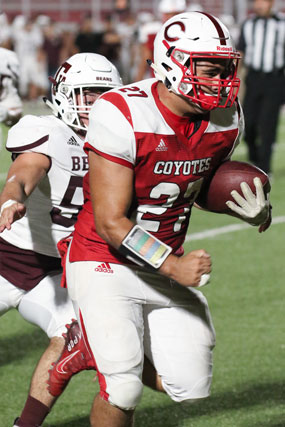 A couple of turnovers put the Bears up early and they never looked back.

After PSJA scored on the game’s opening possession a Coyotes fumble on their second play from scrimmage was returned for a touchdown to give the Bears a quick 14-0 lead.

An interception in Bears territory stopped the next Coyotes drive allowing the Bears to go up 21-0 halfway through the first quarter.

By halftime it was 48-7 courtesy of three more La Joya turnovers and some big plays from PSJA quarterback Justin Morales and running back JR Vasquez. Morales threw for 147 yards and three touchdowns in the first half. Vasquez had over a 100 yards rushing and two touchdowns at the break.

La Joya’s lone score of the half came via a Eddie Villarreal 11 yard touchdown on the first play of the second quarter that was set up by a 55 yard run from Ivan Garces. For most of the evening, however, the usually strong Coyote running game struggled against the Bears defense.

After Villarreal’s score cut the lead to 21-7, the Bears, aided by two more Coyote turnovers, ran off 27 straight points before the half ended.

The second half started much the same way as the first. PSJA scored after stopping La Joya’s opening drive and scored again after the Coyote’s sixth turnover. A safety put the Bears up 64-7 after three quarters. One minute into the fourth they scored again.

A late touchdown run from Carlos Valero for the Coyotes closed out the scoring.

The final turnover count for the Coyotes was seven.

“Anytime you turn it over, even once or twice, makes it very hard to win a ball game,” said La Joya coach Rueben Farias. “Nothing to take away (from PSJA), they played good and capitalized on those mistakes. They are an explosive team.”

Despite the score Farias was upbeat about how his team finished out the game.

“I was proud of them for that,” he said. “In the second half we got a score on the board and we were able to convert some first downs and move the ball down the field.”

After the game Farias said he spoke with his team about playing better football and getting ready for next week.

La Joya travels to McAllen Thursday to take on the Memorial Mustangs. The Mustangs lost their district opener to Mission 28-25, making next week’s game another key one. Most of them in a super competitive like District 30-6A will be.