“This is not ‘Judge Judy,’” Vasquez said Sept. 20, when he brought the 398th state district court to La Joya. “This is the real thing.” 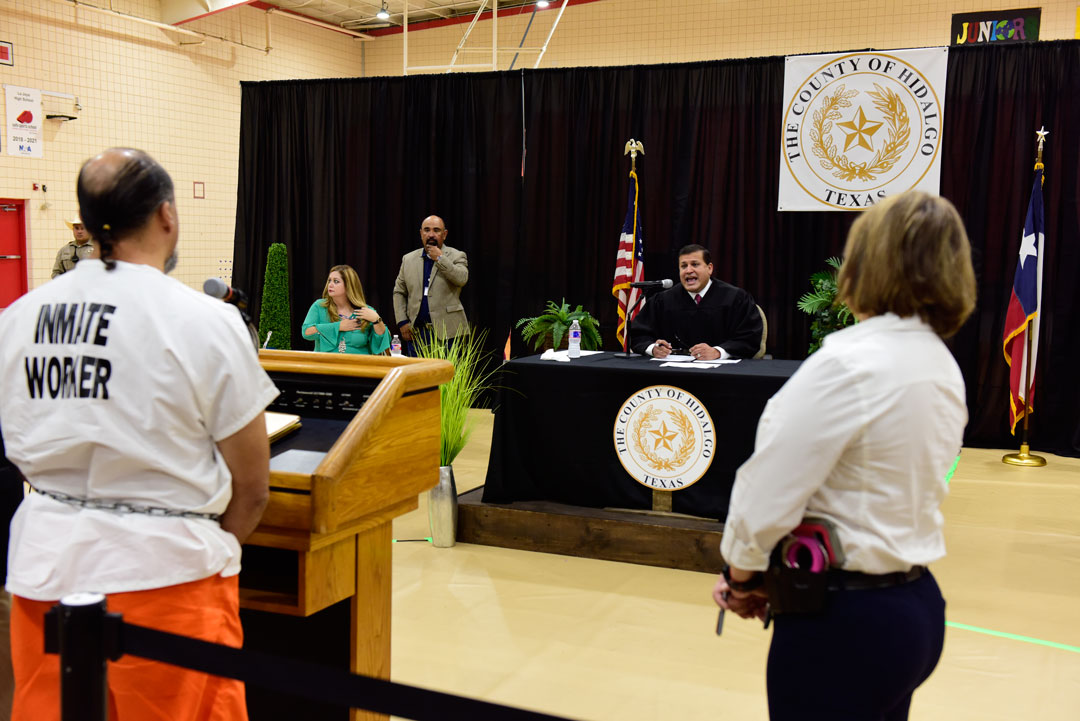 Vasquez regularly holds court at Hidalgo County high schools through a program authorized by the Texas Legislature, which educates students about the legal system and discourages them from using drugs.

“I’ve been to Juarez-Lincoln, to PSJA Southwest, to both Sharyland schools, McAllen, Edcouch-Elsa,” Vasquez said, adding that he wanted to provide students an opportunity to witness how the justice system works.

While it wasn’t ‘Judge Judy,’ the hour that Vasquez spent sentencing seven people who pleaded guilty to drug and alcohol charges contained plenty of drama.

Faced with two felony charges for possession of cocaine, Roberto V. Silva, 33, of Edinburg arrived in court — the high school gym — with his attorney.

The Edinburg Police Department had arrested Silva twice during the past six months.

“If I test you right now, you’ll come out positive for cocaine?” Vasquez asked.

“Uh, yes sir,” Silva said, adding that he would test positive for marijuana.

“You walked in free, right?” Vasquez said, incredulous. “And you’re telling me you’re on my probation — or, in my case, you’re out on bond — and you’re coming out positive? You’d test positive for marijuana?”

Silva said he would.

“Take him into custody,” Vasquez said. “Go sit down.”

The bailiff cuffed Silva and took him away. After sentencing a man who pleaded guilty to possession of methamphetamine, Vasquez called Silva’s case again.

Vasquez announced that he would still place Silva on deferred adjudication, which allows the court to dismiss the case if the defendant stays out of trouble.

“You were honest. I always reward honesty,” Vasquez said, adding that he wanted to help Silva, not punish him for telling the truth. “I’m going to honor your four years deferred adjudication. I thought about that. I was upset, saying: ‘Come on, you’re out on bond and you’re doing this?’’

Silva thanked the judge and walked away without handcuffs.

After he sentenced the defendants, Vasquez spent nearly an hour taking questions from students.

“Someone asked me one time: ‘Why are you talking to these kids? They can’t vote for you,’” Vasquez said, adding that he replied: “When I took this job, when I was elected, it’s not a matter of: ‘I’m going to go to the ones who can vote for me or the ones who can help me out.’ It’s a matter of helping my community: You all here.”

Students asked Vasquez about the Telemundo show ‘Caso Cerrado’ (Never heard of it), whether or not politics had ever influenced how he handled a case (No), and if he works every day (Yes, and he actually takes the bench on time).

“They have great questions, by the way,” Vasquez said. “We got great students here.”