The Mission Historical Museum held their 13th annual dinner banquet at the Mission Event Center last week, hosting a fundraising raffle with items donated from business vendors, a dinner from Balli’s, Entertainment by Grupo Jarrochos and the presentations of the five 2019 Wall of Fame honorees. 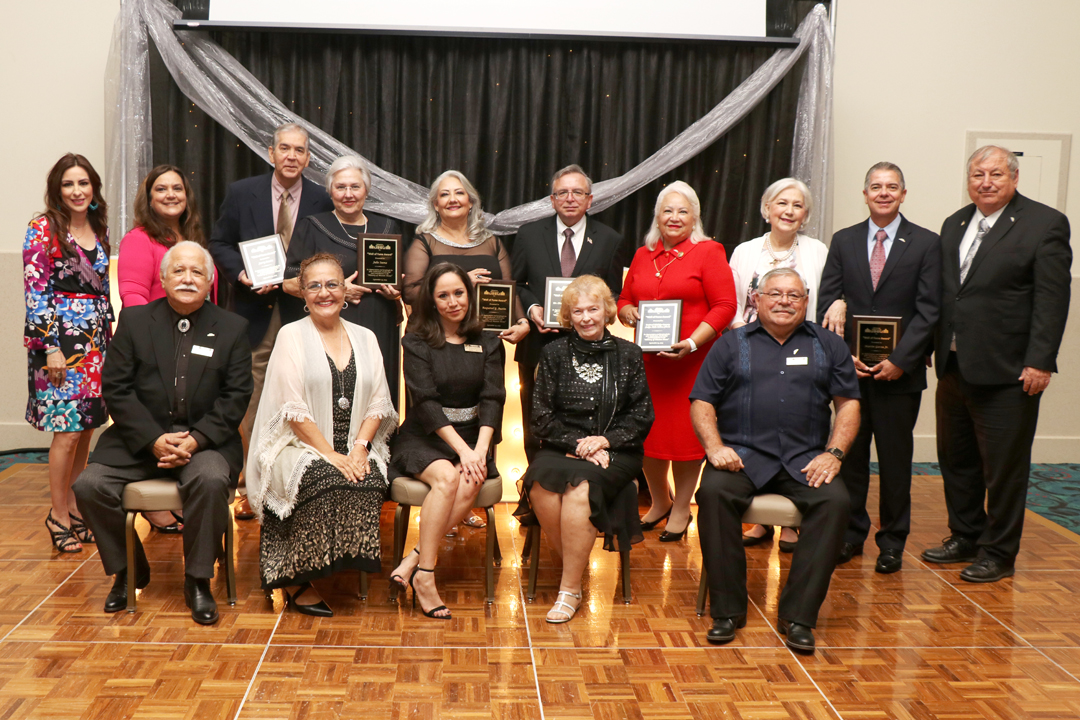 Cynthia Stojanovic, the director of the Mission Historical Museum, said they were glad to celebrate the honorees and their accomplishments in the community.

“This is a special evening to celebrate those importan&nbsp;individuals in our community who have given us such contributions in the area of medicine, education, civic responsibility, business and so many more endeavors,&rdquo; Stojanovic said. “Tonight, let us reflect on this year.&rdquo;

Stojanovic said that Mission experienced tragedy this year after the loss of Lt. Corporal Jose Luis “Speedy Espericueta, a police officer killed in the line of duty.

Roxanne Lerma, the Media Relations Director for the city of Mission, said she was honored to serve as the Master of Ceremonies for the event.

“The Mission Historical Museum is such a valuable resource to our community, but so are our people,&rdquo; Lerma said. “And the people [being honored] are incredible and amazing, and the best part is, they&rsquo;re ours. They&rsquo;re part of the city of Mission, and they bring all that greatness here to our community.&rdquo;

The seven honorees served in different positions throughout Mission and the RGV, and contributed in varying capacities.

Starting her career in the La Joya Independent School District as an english teacher, Flores worked as an adult probation officer and vocational rehabilitation counselor before earning her Doctor of Jurisprudence from the University of Texas School of Law, making her the first lawyer to graduate from La Joya High School.

Flores served the county as an assistant district attorney as the Chief Juvenile Prosecutor and Chief Felony Prosecutor in the 93rd and 139th District Courts before opening her private practice. She became the first elected State District Judge of the 398th District Court in 2000, and was re-elected for three more terms.

An advocate of organ donation following her own donation of a kidney to her son, Flores served as a state district court judge for 16 years before joining her son at the Law Office of Rene A. Flores.

Mrs. San Juanita “Janie&rdquo; Connelly
Janie Connelly has served as an educational leader for over 40 years in the Mission Consolidated Independent School District. Developing an interest in being a teacher when she attended Roosevelt Elementary School, Connelly began her teaching career at Mission Junior High School, focusing on Language Arts.

Coaching several University Interscholastic League events throughout, Connelly began teaching English at Mission High School in 1976. She began earning her master&rsquo;s degree before graduating in 1980, after which she subsequently joined the Rio Grande Valley Council of Teachers of English (where she served as president for a time).

Moving up the ranks, Connelly was voted Teacher of the Year in 1989 before receiving her mid-management certification and becoming an assistant principal in 1992. In 2001, Connelly became the principal of Mission High School, which she oversaw for 11 years before becoming the Director of Student Services at Central Office. She retired in 2013, saying her philosophy in education was always about how she could best serve her community and the students in Mission.

A graduate of Mission High School in 1988, Garza worked in several capacities of civil service.

Starting his career in law enforcement, Garza joined the Mission Police Department as a Police Reserve Officer at the age of 21. One year later, he became a full-time officer assigned to the patrol division.

Garza was promoted to Criminal Investigator just one more year after that. During this time, he was earning his bachelor&rsquo;s degree in police administration, and moved up the ranks in the department. Garza served as a Corporal, Sergeant, Lieutenant, Mission Crime Stoppers Coordinator, Public Information Officer, Assistant Commander of the Criminal Investigations Division, Special Crimes Unit Commander, Assistant Chief of Police in charge of Operations, Internal Affairs Investigator and Spokesperson for the city of Mission.

Charles Ike Austin, M.D. and Raquenel Garcia Austin, M.A., CCC/SLP
The Austins have been contributors to the Mission community for decades, in both the medical and educational spheres. Dr. Charles Austin comes from a pioneer family in Mission (with a presence in the city since 1917), and opened a private medical practice in the city in 1982. After 26 years, he began teaching in academic medicine.

Dr. Austin recruited seven doctors to work in Mission, and has been involved in the training of over 150 doctors to this day. Currently, he is employed with the University of Texas Rio Grande Valley School of Medicine, where he focuses on the specialty of Family Medicine.

Raquenel Garcia Austin, also known as Rocky, came to Mission after marrying Dr. Austin in 1981. She briefly paused her career in speech pathology to oversee the management of Dr. Austin&rsquo;s medical practice and live as a stay-at-home-mom for their three daughters.

As their children grew, Rocky served as a parent volunteer and taught CCD classes at St. Paul&rsquo;s Catholic Church. Over the years Rocky also was part of the Hidalgo County Medical Auxiliary, Mission Junior Service League, Board of the Texas Citrus Fiesta and Mission Historical Museum, and currently serves on the city&rsquo;s Planning and Zoning advisory committee.

Currently, Rocky works for MCISD as a Speech and Language Pathologist.

Gerardo H. Saenz, Jr. and Julie Anne Saenz
Gerardo Saenz and his wife, Julie Anne, met in Ohio in 1965. Gerardo, originally from Mission, graduated from MHS in 1960 before enlisting in the U.S. Air Force.

He was honorably discharged in 1964, came back to Mission and lived here for one year before moving to Ohio, where he found work at a Libby&rsquo;s Tomato Cannery – and Julie Anne.

The pair went to school there for a couple of years before getting married, and then moved to Mission together. They completed their college education at the University of Texas Pan-American in 1972.

Gerardo worked on a Hidalgo County Project aimed at getting Rio Grande Valley migrants work at local businesses in the area, rather than travel to northern states for work.

In 1974, Gerardo became a State Farm Insurance Agent, and has served the Mission community for 46 years so far.

Julie Anne worked in LJISD for a time before teaching in Mission schools for 20 years. She earned her master&rsquo;s degree in library science from Sam Houston State University after that, and served on various boards including the Mission Historic Preservation Commission and the McAllen Music Club.