The city of Mission held a workshop this Wed. Oct. 2, 2019 to discuss potential city projects that would be funded by a bond election in 2020.

Mayor Armando O’caña and City Manager Randy Perez presented several projects to the council members who attended the workshop, Beto Vela and Jessica Ortega-Ochoa. City Attorney Gus Martinez, as well as the deputy city managers and some of the city department heads were also present. 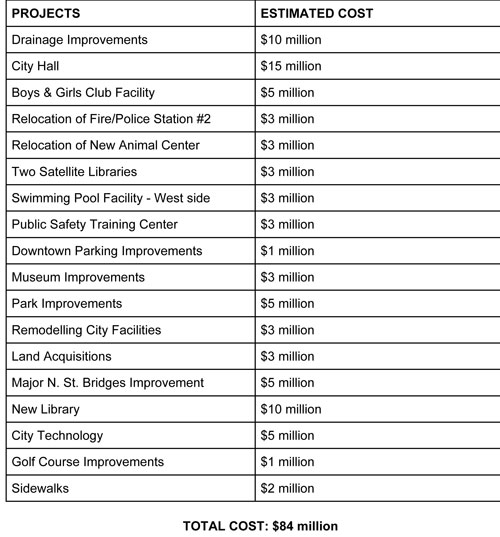 Originally, O’caña presented 18 projects, totalling at a cost of $77 million up during the proposed bond election.

Martinez said they were expecting to announce the official bond election and present the ordinance for the election in the first week of Jan. 2020.

The proposition the city makes will be published in a newspaper for consecutive weeks prior to the election.

O’caña stated that he preferred for each project to be a separate line item in the election, meaning voters would vote yes or no to each individual project. Ortega-Ochoa asked why the city doesn’t group certain projects together, so voters could vote in clusters.

O’caña said voters would be less likely to vote on grouped projects because on the surface, each cluster would cost more.

“My understanding is now – after this legislative session – we have to have the citizens vote on each item,” O’caña said. “That does me a big favor, because the citizens will tell us yes or no to each of the items.”

The most expensive proposed project would be the construction of a new city hall, which the city estimates to cost $15 million (as compared to the Mission Event Center, which cost about $16 million).

“It’s time for us to look at future forecasts,” O’caña said, noting that the space on the city hall property is being wasted. “It looks beautiful, but it is not functional.”

O’caña said that Mission wanted to avoid the debacle at the Sept. 18, 2019 Mercedes City Commission meeting in which several residents were removed from the premises or barred from entering because of the size of the hall and the nature of the fire safety codes. He brought up several examples of when the city hall in Mission has been over capacity in the past, and that growing pains are not easy.

After going over the initial figures presented, Ortega-Ochoa asked at first for a redistribution of certain funds. O’caña said she could not cut any standing project cost estimations, but she could add more if she felt a project needed more.

She requested an increase of park improvement funds in the proposed election (from $2 million to $5 million) and an implementation of $2 million toward sidewalks for school zones in particular. Ortega-Ochoa also asked that rather than limiting technology improvements to public safety, raise the cost proposed in order to cover an improvement of all city tech, including public safety and city hall.

O’caña stressed that the proposed bond election should not and would not stop the staff from writing grants and obtaining additional funding that way. The city council plans to meet again to further discuss the proposed projects, which will be presented by staff at a future workshop.