Hundreds of first responders from across south Texas converged in McAllen to deal with the next possible emergency, with them as the victims.

The local organization Proactive Education for Emergency Responders hosted their third annual safety and wellness summit earlier this week with the goal of getting local emergency responders to learn about the new standards and training, coping with stress on the job, drug trends and disaster response. 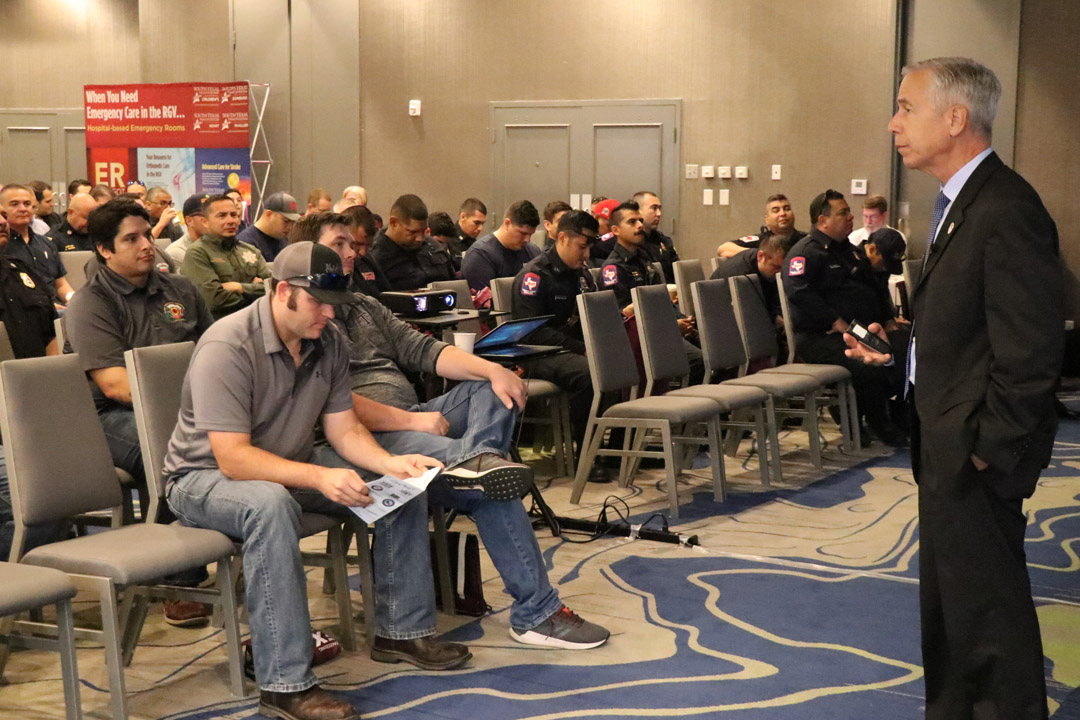 The PEER organization is comprised of members from Mission Fire, McAllen Fire, South Padre Island Fire and the Edinburg Fire Department. Mission Assistant Fire Chief Robert Rene Alvarez is among the founding members of the organization.

“We regularly go to trainings out of town where a lot of them had important topics that we are discussing here such as cancer, PTSD, anything having to do with health, safety and wellness from the stress of the job,” Alvarez said. “We wanted to provide that to our first responders in this region. It’s hard for small departments to send people out to these trainings so we wanted to provide this at no cost to local first responders.

According to a February 2017 article by the Journal of the American Psychiatric Nurses Association, first responders have elevated rates of post-traumatic stress disorder, depression, anxiety, and alcohol use when compared to the general population. An April 2018 study published by the Ruderman Family Foundation found that more first responders die by suicide than in the line of duty each year from the stress of their job.

Statistics like that is why Alvarez said the summit is needed.

“First responders have to know how they can take care of themselves to be in the best mental, and physical health to provide the services we have to provide to our communities,” Alvarez said. “If we can’t take care of ourselves-if we can’t be at our best-how can we do our job?”

The conference also offered an opportunity for fellowship and networking, with an agenda that included high profile speakers like Ret. Asst. Fire Chief Joseph Pfeifer who spoke on Monday and handled crisis leadership during the 9/11 attack. Pfeifer was the first battalion chief to enter the World Trade Center and establish command in the lobby during the tragic events.

Other speakers included Dan Kerrigan, a fire marshall who spoke on the importance of fitness for first responders.

Texas State Trooper Lt. Enrique Chavez spoke on PTSD among first responders and how to deal with traumatic events daily.

Medical experts such as Dr. Sara Jahnke, the director and investigator of the Center for Fire Rescue and EMS Health Research at the National Development and Research Institutes, Inc. spoke at the event. Jahnke spoke on the topic of sleep deprivation among first responders on Wednesday, the third and final day of the summit.

“In research there’s a lot of focus on depression, PTSD, and cancer but poor sleep hygiene can increase the risk for all of that,” Jahnke said. “First responders need to be aware of that and get the sleep when they can and to appropriately use caffeine. Most of them can only get four hours of sleep or less because they have to respond to a heart attack, a fire or a car accident. Someone is going to have to be up. Sleep deprivation increases the risk of sleep disorders, drowsy driving, car accidents and those types of things.”

Homer Salinas, a lieutenant for the Mission fire Department, was at the summit as a representative for the Firefighter Cancer Support Network. The network works to educate firefighters on cancer protection for firefighters, increase cancer awareness and prevention for fire and EMS members.

Salinas made headlines nearly two years ago when the city of Mission announced Salinas was diagnosed with kidney cancer. Salinas said the summit is important because the network opportunities it provides can lead families to better cope with cancer as it did for him and his family.

“When I got the diagnosis, my world came crashing down and I didn’t know who to turn to or what to do,” Salinas recalled. “When you’re a firefighter and you get cancer, you have so much on your plate already with your job, finances, family and health. Luckily this organization contacted me with information on what to do, what to ask my doctor, what treatments are available, and how my family and I can cope.”