It was a home run for former MHS Softball Coach Iris Iglesias and her family last week.

The Mission Consolidated Independent School District unveiled the new name of the Mission High School softball complex last Thurs. Oct. 3. The facility was named the Coach Iris G. Iglesias Softball Complex in honor of her impact on the athletic program and school district as a whole. 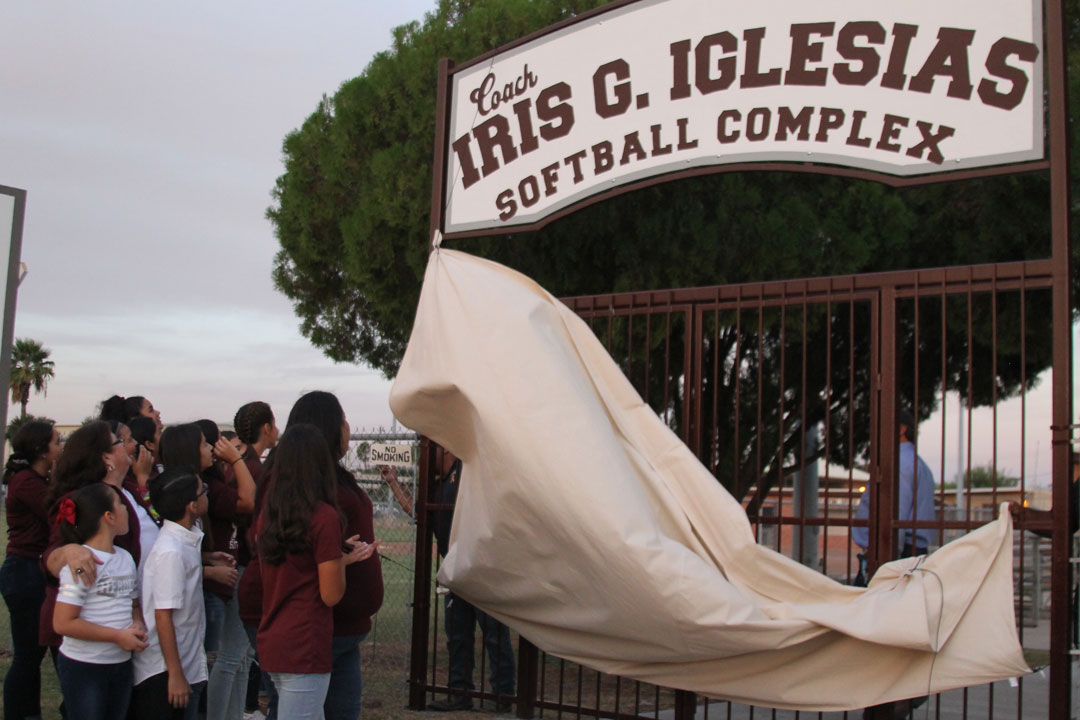 Iglesias was the first softball coach at MHS, serving the district for over 20 years. She was surrounded by family and friends during the unveiling ceremony, which highlighted the new signs and entry archway that bears her name.

“I feel blessed and honored,&rdquo; Iglesias said as a rainbow appeared in the sky while she thanked everyone who contributed to her career. “Thanks for coming in and sharing this time with me. I am really moved, I am honored, I cherish your friendship. I love this district, I love Mission High School and I love the Mighty Mission Eagles.&rdquo;

Iglesias is a Mission native who graduated from MHS in 1973. While attending Pan American University, she competed as a member of the volleyball team and fastpitch softball team. She married Moises Iglesias in 1975 and then spent three years with him on the east coast as he served in the U.S. Navy.

Moises Iglesias spoke during the ceremony, recalling the time they spent in South Carolina and the difficulties they faced.

“It took us about three or four months to figure out that it was going to be tough,&rdquo; Moises Iglesias said. “God will provide. It&rsquo;s our belief that you put your faith in God, your hard work, and this is what will happen today.&rdquo;
Upon her return to the RGV, Iglesias completed her college education in 1980 from Pan American University.

Iglesias began her teaching and coaching career at her alma mater. Over the course of 34 years, Iglesias rose through the ranks and took on various coaching duties in volleyball and basketball, earning honors along the way.

Over the 20 years that Iglesias led the Lady Eagles, she guided the teams to 17 state playoff appearances and many District, Bi-District, Area Round, and Regional Semi-Final championship titles.

Iglesias&rsquo; daughter, Jessica, also spoke about growing up with her mother, and being coached by her when she got to high school.

“Some of my fondest memories besides growing up here on this campus is having my mom as the best softball coach a daughter could ask for,&rdquo; Jessica Iglesias said, noting that her mother never played favorites and pushed her just as hard as every other athlete. “We had our ups and downs, especially during season; no matter what was going on in her life, she was always ready to take the day on.&rdquo;

Iglesias&rsquo; son, David, emphasized his mother&rsquo;s contribution not only to their family, but the community at large.

“Mom, we&rsquo;re here to celebrate you,&rdquo; David Iglesias said. “You always lead by example, instilling leadership, providing mentorship and sometimes even parenting to your athletes. The true victories are the successes these athletes have gone on to accomplish by serving their country, their community, becoming first responders, doctors, nurses, attorneys, etc.&rdquo;

Iglesias also founded the Mission Fastpitch Festival in 1995, which is known as the largest high school softball tournament in South Texas. After a 34-year career as an educator and coach at MHS, Iglesias retired in June 2014.

During her career and beyond, Iglesias received numerous awards and recognitions that include: various Coach of the Year honors, Rio Grande Valley Sports Hall of Fame induction and was inducted into the Mission Historical Museum Wall of Honor.

Iglesias&rsquo; sister, Gloria Garza Gutierrez, said their parents would be proud of her and all she has done for the family and students at Mission High School.

“I can&rsquo;t think of anyone who is more worthy of this acknowledgement than Iris,&rdquo; Gutierrez said. “We were very fortunate to have Mom and Dad, who encouraged us to find passion and pursue it. They taught us the importance of values, and that is what our sister personifies: she&rsquo;s committed, she&rsquo;s fair, tenacious and very willing to give of herself to help others.&rdquo;

Iglesias has also served to inspire and promote girls&rsquo; athletics through several organizations and by serving as a speaker and instructor at clinics throughout the region. Superintendent Carol Perez spoke on her impact on MCISD and the legacy she created.

“She is one of those individuals that the whole community and the Mission CISD family loves to brag about,&rdquo; Perez said. “She&rsquo;s an alumni who went on and furthered her education, and then returned to Mission CISD to not only serve thousands of students over the course of her career at Mission High School, but also throughout the region.&rdquo;

“She has left her mark in the whole Valley,&rdquo; Perez added.

The MCISD Board of Trustees were also present, and Charlie Garcia III, the board president, congratulated the entire Iglesias family on their behalf.

“This is certainly a proud day for the Mission school district and the city of Mission as well,&rdquo; Garcia said. “The long legacy speaks for itself. We are very proud to be a part of this moment.&rdquo;

MHS Principal Edilberto Flores said that all the people present that day were there in support of Iglesias&rsquo; contributions to MCISD.

“It is a testament to the impact Coach Iris Iglesias had on the students of our community that we are here today,&rdquo; Flores said. “We celebrate the official naming of our softball complex, with the new entrance and the signs that bear [her name.]&rdquo;

State Representative Sergio Mu&ntilde;oz, Jr. also took the time to present Iglesias with an official plaque that detailed her accomplishments, along with a U.S. flag flown over the state capital on Sept. 21, 2019 in honor of the Alton Bus Crash.

“We know the hard work and everything that goes into not only being an example for our student athletes, but teaching them what they need to know on and off the field,&rdquo; Mu&ntilde;oz said. “[She taught] discipline, working together and making sure that they&rsquo;re good examples and people we can be proud of here in the Mission school district and throughout our community.&rdquo;

Mission was not the only district to support Iglesias on her big day – Coach Paul Cruz, the head varsity softball coach at Sharyland High School, and his wife Nicole, their head librarian, were also there to celebrate Iglesias&rsquo; career and accomplishments.

“She deserves this,&rdquo; Coach Cruz said, noting that it was not a matter of if, but when. “She worked hard all these years, and I know she put a lot of work into it. It&rsquo;s just showing that they appreciate what she did all these years. I&rsquo;m glad she&rsquo;s getting this recognition.&rdquo;