“I sat down next to her on the living room floor, touched her face and I asked her to wake up. I was only four years old and I understood she had lost the last fight,” Zuniga said, adding that eventually her sister joined her next to her mother as they waited for police to arrive. 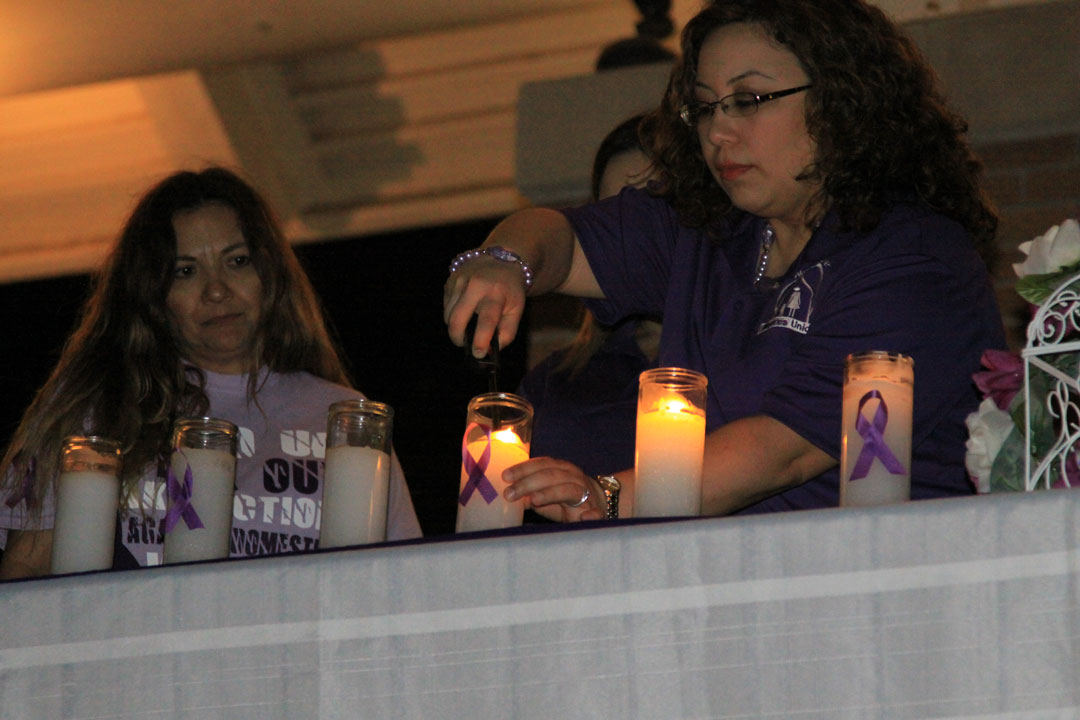 Zuniga, an officer at the Edinburg Police Department, recounted this story last week during a vigil in honor of national domestic violence awareness month.

As part of the vigil, Zuniga and two other survivors of domestic violence recounted their experiences with the abuse that, according to the Texas Council on Family Violence, killed 174 women in Texas last year.

“On more than one occasion, my mother ended the relationship [with her boyfriend] but then he would come back, banging on the front door and on the windows, forcing his way in to our apartment,&rdquo; Zuniga said as she recalled the abuse her mother faced. “No one should have to endure any amount of abuse at the hands of another. The effects of abuse are permanent and life changing. For those who have been abused there are services, counseling and other programs available…but you must speak up. I stand here not only as an officer, but as a survivor and for my mom and anyone who has lost anyone at the hands of abuse.&rdquo;

The vigil, held Thursday, Oct. 3 at the McAllen Convention Center, was held in conjunction with Hidalgo County&rsquo;s 5th annual “Purple Day.&rdquo; The event partnered all Hidalgo County law enforcement agencies, the shelter Mujeres Unidas and the city of McAllen to focus on domestic violence prevention.

“We&rsquo;re trying to involve as many people as we can from different agencies coming here to show our community that, if there&rsquo;s any victims out there, we want them to know we are here for them,&rdquo; Hidalgo County District Attorney Ricardo Rodriguez Jr. said. “We want to do as much as we can at the front before dealing with it after something happens. They feel there is no one for them to help them, no voice for them. This is why it&rsquo;s so important for them to see we are in huge numbers and we care about what is going on. No one should live with domestic violence affecting them.&rdquo;

According to Gloria Terry with the Texas Council on Family Violence, who shared a report of domestic violence in Texas statistics from 2018, 174 women were killed by an “intimate&rdquo; partner last year. Nearly two-thirds of those women were killed by a firearm with 67 percent of them killed at home. Their ages ranged from 16 years old to 85.

“The 16-year-old, her biggest worry should be ‘what is the Snapchat filter I will use today?&rsquo; Unfortunately, her life was ended very young at the hands of a boyfriend,&rdquo; Terry said. “The eldest victim should be reflecting on her golden years. Unfortunately that was cut short at the hands of her husband. Domestic violence crosses the entire lifespan. It doesn&rsquo;t happen to a particular age group, ethnicity, it happens disproportionately to women.&rdquo;

Terry also said that last year, 32 men were killed at the hands of a female partner. Their ages ranged from 24 to 74.

“Each one of these homicides are preventable, “Terry said.

As part of the vigil, attendees marched around the pond at the McAllen Convention Center and volunteers with Mujeres Unidas lit six candles. Five of those candles represented the women who have been killed in Hidalgo County within the last year whose ages ranged from 21 to 45, and a sixth candle to represent the “silent witness.&rdquo;

“It represents the one out there who we don&rsquo;t know will speak up or stay silent and possibly be killed,&rdquo; Mujeres Unidas Executive Director Estella DeAnda said. “We will light a candle in their memory. They were someone&rsquo;s daughter, cousin, niece, friend, neighbor and we want to remember them.&rdquo;

Mujeres Unidas, which has been open since 1978, sheltered 516 individuals in its McAllen-based shelter last year and served more than 3,400 others, DeAnda said. She urged those suffering from domestic violence to reach out to law enforcement or to contact Mujeres Unidas for help.

“Even one is too many,&rdquo; DeAnda said of domestic violence survivors. “Asking for help is the first step of getting help. It could happen but no one should be afraid of receiving help.&rdquo;