It was another very good week for four of the seven football teams from the Mission, Sharyland and La Joya school districts, the Big 7. Not only did these four teams win, but three of them, the Pioneer Diamondbacks, the Palmview Lobos and the Sharyland Rattlers, won by point margins of 2:1 or greater. The other winning team, the Mission Eagles, may not have won as impressively, but they won, and when all is said and done, that’s all that matters.

Through Week 6, the top five Big 7 teams have combined for a 20-6 overall record and an extremely impressive 13-1 district record. That is a testament to the high quality of football being played by these teams. 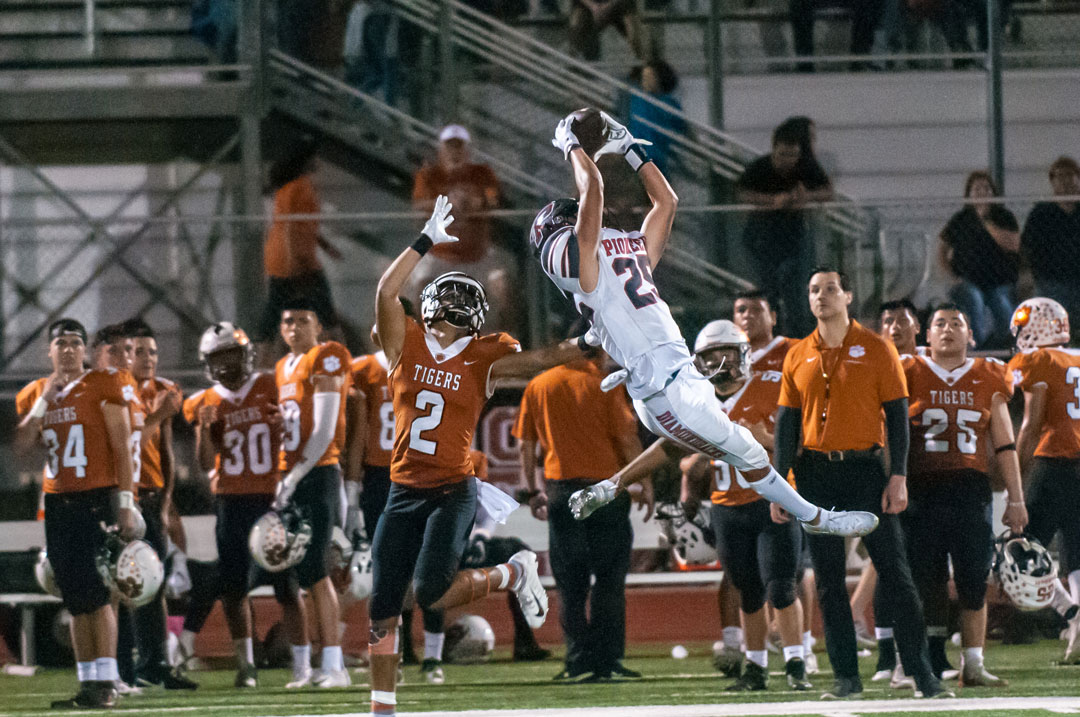 Going into Week 7, all but one of the Big 7 teams are in action. That’s because the 4-1 (4-2 overall) Palmview Lobos have a bye this week. Two of the remaining six, the Juarez-Lincoln Huskies and the Mission Eagles, went head-to-head against each other at Tom Landry Hall of Fame Stadium last night. That leaves four of seven teams playing tonight. And with the Donna Redskins at the Mission Veterans Patriots game being previewed separately as the Progress Times game of the week, we will take a look at the other three games involving Big 7 teams here.

Valley View Tigers at Pioneer Diamondbacks
Coming off their bye week, the 1-0 (4-1 overall) Pioneer Diamondbacks pretty much had their way with the 1-1 (3-3 overall) Mercedes Tigers last week. They jumped out to an early 7-0 lead on a touchdown pass from senior Eddie Lee Marburger to junior Gavin de la Garza, tacked on another seven points on a fumble recovery and 41 yard run back by senior defensive back Ethan Lee, and never looked back from there. When all was said and done, the Diamondbacks put 51 points on the scoreboard, their exact average points per game thus far this season, while the Tigers could only muster 25 points, seven of which coming on a meaningless touchdown with less than two minutes left in the game.

While the 0-2 (2-4 overall) Valley View Tigers, the Diamondbacks’ opponent tonight, are off to a slow start, they’re not a team that the Diamondbacks can afford to look past. And if there’s one thing that Pioneer head coach Tommy Lee is determined to do, it’s to make sure that early season success does not go to his players’ heads.

Last year the Diamondbacks defeated Valley View by a score of 35-28.

McAllen Bulldogs at La Joya Coyotes
After getting off to a 2-0 start, the 0-2 (2-3 overall) La Joya Coyotes have gone into a bit of a tailspin by losing three in a row. The fact that their last two opponents have combined for 132 points against them is hard to believe in-an-of-itself, but it’s even harder to believe when you take into account the fact that the Coyotes are coming off a 2018 season in which they gave up less than 200 total points in 10 games!

As has been the case all season long, the Coyotes have relied almost exclusively on their running game. Against Memorial last week for example, Coyotes’ quarterback Carlos Valero only attempted one pass all night long.

Conversely, Valero and six other La Joya players ran the ball 61 times for 446 yards. Against the PSJA Bears the week before, the Coyotes completed one pass on two attempts for 20 yards while running the ball 36 times for 209 yards.

Tonight the Coyotes will be hosting the 0-2 (2-3 overall) McAllen High Bulldogs. Like the Coyotes, the Bulldogs opened their 2019 season with back-to-back wins only to go 0-3 since. With the Mission Eagles, PSJA Bears and Nikki Rowe Warriors all off to 2-0 District 30-6A starts and with the McAllen Memorial Mustangs tied for fourth with PSJA North at 1-1, it’s hard to imagine any of the three 0-2 teams making a run at the playoffs. But whichever of these two teams wins tonight will at least have an outside chance of salvaging their season while the other will most likely have nothing better to do than start looking forward to next year.

Last year the Coyotes defeated the Bulldogs by a score of 28-0.

Sharyland Rattlers at Edcouch Elsa Yellow Jackets
It’s been an up-and-down season for the 2-0 (4-2 overall) Sharyland Rattlers, but that could be attributed to the fact that Sharyland head football coach Ron Adame always schedules the toughest non-district opponents he can for his team. Case in point, the McAllen Memorial Mustangs and the Brownsville Hanna Golden Eagles, two of the top teams in the Valley, are responsible for the Rattlers’ two losses. Their four wins have come against Brownsville Pace, La Joya, Laredo Cigarroa and Roma.

The fact that the Rattlers are 2-0 in District 16-5A-II is a testament to how well Adame’s strategy is working.

And the fact that they lost three out of four non-district games last year but went 6-0 in district play, is further proof of the genius behind Adame’s scheduling strategy.

These three games are all scheduled to kick-off at 7:30 tonight.