On a night when their usual high powered offense was held in check, the Mission Veterans Memorial Patriots used a swarming, stifling defense to shut out the Donna Redskins Friday at the Tom Landry Stadium 21-0 and remain undefeated (5-0) in District 16-5A Div. I.

Veterans capitalized on a blocked punt and a fumble recovery late in the second quarter to score two quick touchdowns and jump out to a 14-0 halftime lead. 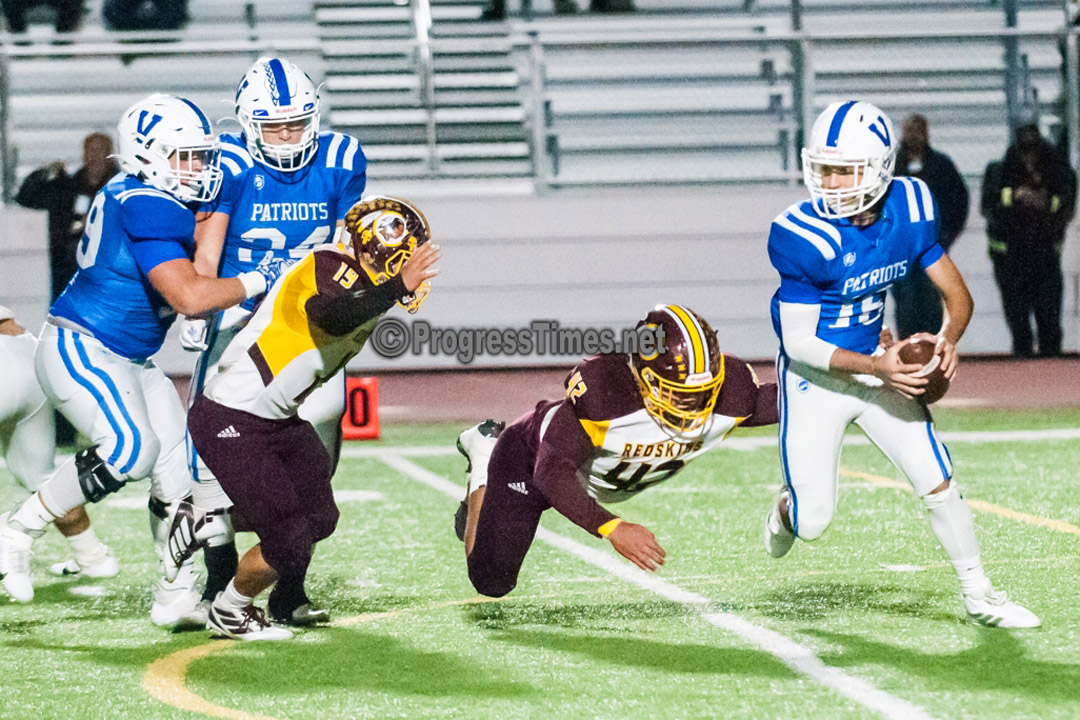 The punt block by Eric Gonzalez was one of many big plays by the Patriots defense on a night that did not start well for the two time defending district champions. After turning the ball over themselves on just their second offensive play of the game, Patriot quarterback Ricky Reyna went down with an injury on their second possession. Another turnover followed two plays later.

The Patriots defense answered by stopping the Redskins with three straight three and outs and then the punt block, giving the offense a short field. Danny Cantu started the scoring for the night with a one yard touchdown run four plays later. It was 14-0 less than a minute later after a Donna fumble set up the Patriot offense at the Redskins 24 yard line. It took one play for the Patriots to score on another Cantu run.

A big fourth down sack from Sergio Farias in the third quarter gave the Patriots good field position and the offense took advantage of it again, using a 20 yard run from AJ Gonzaque to get close before getting in the end zone on an 18 yard pass from Aaron Chapa to Gonzaque to complete the scoring for the night.

Along with the two big stops in the first half, the Veterans defense recorded an interception from Aaron Arredondo and two more fumble recoveries in the second half, the last near their own goal line with just seconds to play, to secure the shutout.

That effort was not lost on Veterans coach David Gilpin.
“That’s two shut outs in a row,” said Gilpin. “That has been a dominate defense for the last two games, and we played well on special teams too.”

Gilpin also commented on how the team was able to overcome the rough start.

“Our whole message at halftime was ‘Don’t panic’.

“We just relied on the heart of a champion, our coaching staff and our kids to get it done together and that’s what we were able to do. I’m proud of our bunch tonight.”

Their quest for a third straight district title continues Thursday, October 17 when the Patriots go on the road to face PSJA Southwest.