Despite residents at the Palm Plaza Development senior center having food services resuming, one resident still voiced concerns Wednesday at the decision by the Mission Housing Authority Board to deny those services in the first place.

During Wednesday’s board meeting, Susana G. Pierce-a resident from Palm Plaza-spoke out against the actions of the board and notified the members that she was given a cease and desist letter from board member Connie Garza following a previous meeting where Pierce openly criticized her and board member Irma Flores-Lopez. 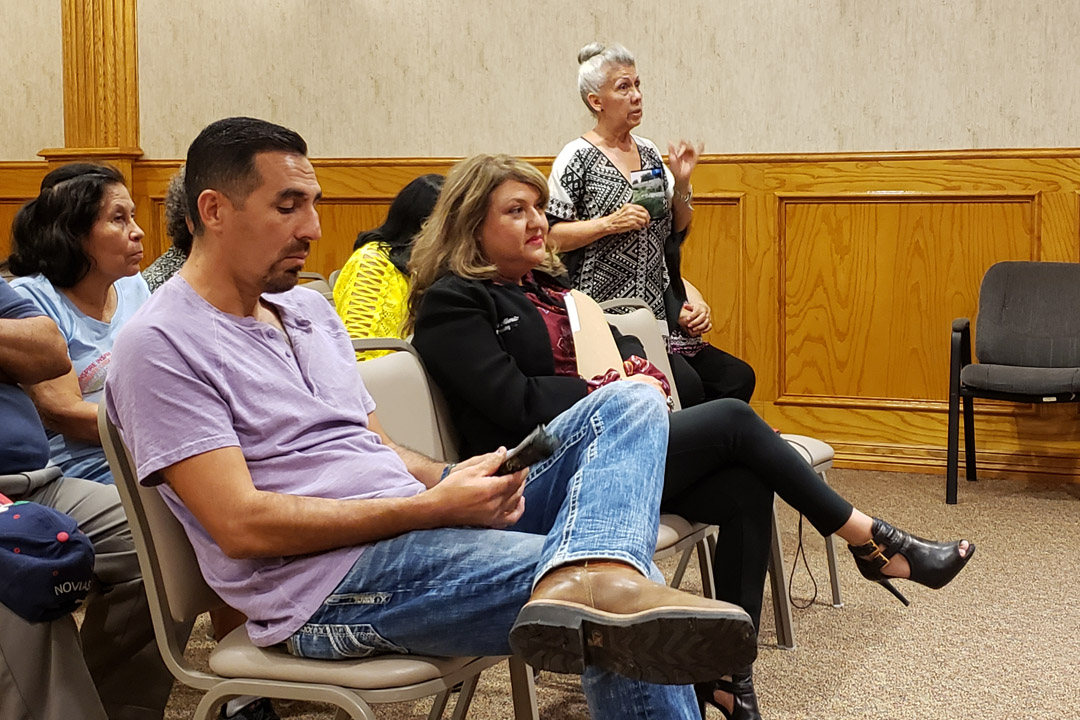 “I don’t think it’s fair that I, a woman at my age, be delivered a letter in front of an officer saying that if I don’t stop this, I would get punished, “Pierce said.

The letter was dated Oct. 1 and signed by Garza who was not in attendance of the meeting.

“I don’t want to take legal action but it’s unfortunate I had to take this course of action but I have to exercise what is available to me when someone is trying to discredit me or tarnish my reputation,” Garza said in a phone interview Thursday. “I did what I felt I needed to do. When people engage in conduct that may be inflammatory or intended to discredit the character or reputation of a person, they cross a line where the person being hurt must evaluate their options.”

Pierce had spoken out against Garza and Flores-Lopez last month when the two members voted to deny members of the public to be allowed to access the senior center and cited safety concerns. This denial occurred despite a stipulation from the Area Agency on Aging that allows the center to receive $40,000 in funds to pay the salaries of three employees there.

According to Executive Director Joel A. Gonzalez, while the food service was interrupted for a week due to Amigos del Valle-the agency providing food to residents-also having a similar stipulation when it comes to which senior centers it feeds. However, following a meeting between Gonzalez, Amigos del Valle and Mission Mayor Armando O’cana, the mayor agreed to let members of the public use the center again with volunteers serving the food.

As the AAA deadline for the funds passed at the beginning of the month, however, the housing authority no longer has access to the $40,000 and had to fire the senior center’s employees.

When the board voted on the senior center, members of the public feared that it would mean a stop to food being served to residents.

“Who gave Miss Irma and Connie the right to disturb the peace at our space?” Pierce said last month. “I’m a resident and…before you do any manipulation, think of us elders who are grateful for the local government for giving us the right to have a good life. Don’t take that away.”

On Wednesday however, Pierce was back with a copy of a cease and desist letter that was signed by Garza.

“You have participated in meetings and conversations which have harmed my reputation,” the letter states. “I demand that you cease and desist immediately any and all slanderous/libelous communication about me. Your failure to comply, will leave no other alternative but to pursue all legal remedies available to me under the law.”

According to Pierce, the letter was hand delivered to her during a garage sale at the development center by Garza, Flores-Lopez and a Mission police officer.

“The situation at Palm Plaza is chaos,” Pierce said. “We had benefits taken from us that we’ve had for 30 years. We’re now without a driver or an events coordinator who helps us read our mail or a cook. I supported not losing the AAA grant but having Connie and Irma removed from the board”.

Flores-Lopez addressed Pierce, and once again stressed the need for safety among Palm Plaza residents and argued that the center would have funds available if either Gonzalez or Deputy Director Jaima A. Ayala stepped down from their roles due to the salary of both men.

She produced photos she took of what she described as “unsafe” conditions at the center which included old fire escapes, worn out tiles and resident’s front doors.

“I parked and was within five feet of someone’s front door and could hear the telenovela they were watching. Can you imagine how unsafe a resident might feel if a stranger did that?” Flores-Lopez said. “I spoke to other housing authorities and they said they don’t participate in this AAA funding due to safety concerns I shared.”

The photos, however, irritated Pierce.

“Who gave you the right to enter someone’s private property and take these photos? This is an invasion of privacy, you’re not going to fix this anyway,” Pierce said.

“One of these days you’ll find out its best just to be quiet,” De La Garza told Flores-Lopez at one point.

After the meeting, Flores Lopez defended her and Garza’s comments to send the letter to Pierce as a way for them to “keep the peace.”

“She has every right to speak up but I don’t think she was fully informed,” she said. “We stand by what we said about stopping the funds just for members of the public. Maybe I’m wrong but it’s OK. It’s part of change, and it’s coming.”