The Sharyland Pioneer Diamondbacks broke open a tight game with three quick touchdowns in the middle of the first half over rival Sharyland in an eventual 63-28 win in the sixth edition of the Snakeskin Classic. The win keeps the Diamondbacks on top of the District 16-5A Div. II standings at 3-0 with three games left to play. Pioneer is 6-1 overall.

It was the Rattlers, however, who opened the scoring, going up 7-0 on a short Benji Valdivia run that followed a Pioneer turnover. It was 7-7 just seconds later thanks to 95 yard kickoff return for a score from the Diamondbacks Evan Maldonado. 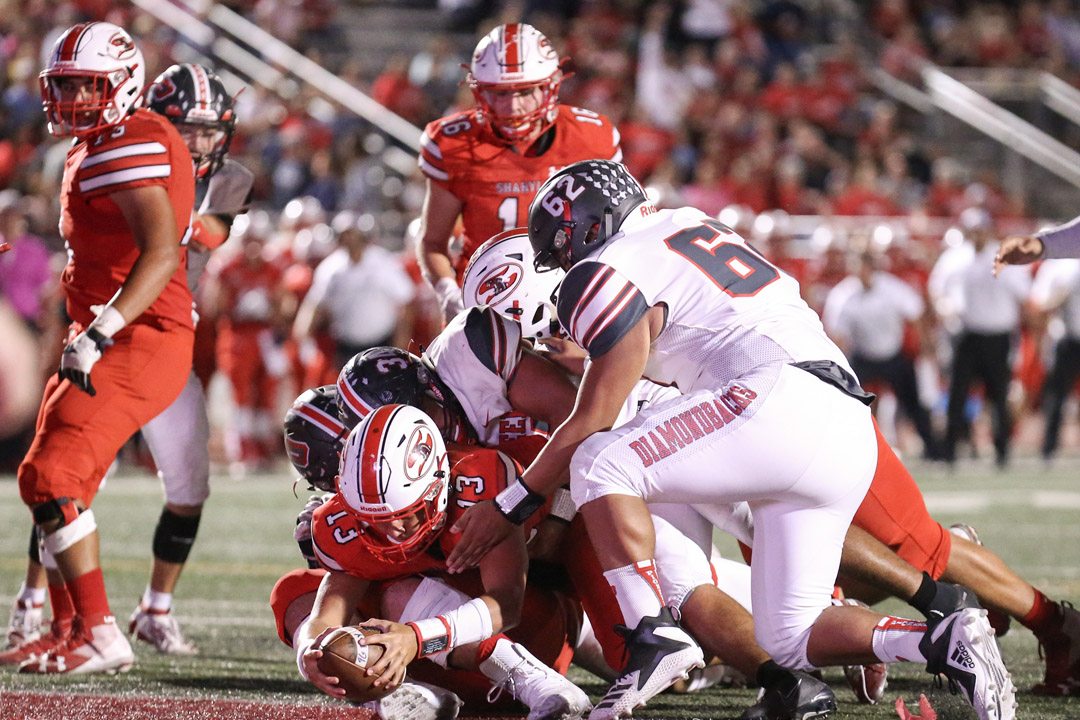 Another Diamondback touchdown, courtesy of an eight yard run from Pioneer quarterback Eddie Lee Marburger put the Diamondbacks up 14-7. Valdivia followed that score with a 15 yard touchdown pass to Daniel Pena to tie the game at 14 all.

It was then that the Diamondbacks used all three phases of their game to take control. First it was the offense, who answered the Rattlers score with a 63 yard drive capped off by a four yard touchdown pass from Marburger to Lavar Lindo. The defense responded with a take away, recovering a fumble in Rattlers territory. Marburger connected with Luke Padilla for a seven yard touchdown pass after the turnover to make it 28-14. Sharyland was forced to punt on their next possession and it was the Diamondbacks special teams who struck again, getting a 47 yard return from Tristan Castillo to set up the offense with another short field. Castillo’s four yard touchdown run made it 35-14 and the Rattlers never got closer than 14 points the rest of the way.

On the night Marburger threw for five touchdowns and ran for two more as both he and the rest of the Diamondbacks continue to put up points in staggering amounts. It was the fifth time this year that Pioneer has eclipsed the 50 point mark in a game. It was Pioneer’s sixth straight win after opening the season with a one point loss to Harlingen.

Luke Padilla was on the receiving end of three of Marburger’s touchdown tosses and Lindo came up with several spectacular catches on the night to go along with two touchdowns.

Pioneer coach Tom Lee was pleased with the overall effort of his team.

“Our special teams had Maldonado take one and Castillo almost took one (with kick returns) and they tackled well,” said Lee. “We had a great defensive effort tonight and the offense came to play. We were down a little the last two games but we wanted to come out and reestablish ourselves as an offense and I think we did that tonight.”

The loss drops Sharyland High to 4-4 on the year and 2-2 in district. They remain in the hunt for a playoff spot with two games left in the regular season.

“We’ve got to bounce back and go 2-0 but we can’t do that without winning the next one,” said Rattlers coach Ron Adame. “So that’s what we’re focusing on.”

Pioneer hosts Laredo Cigarroa next Friday while the Rattlers travel to Mercedes.