Alaniz admitted to arranging for the city of La Joya to buy a piece of property — which he apparently owned — for an inflated price. 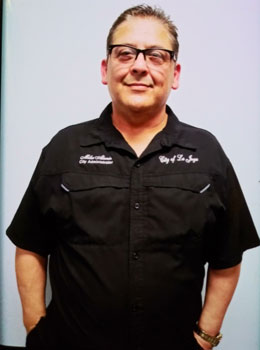 “Administratively, I should have been more careful, your honor,” Alaniz said, according to an audio recording of the hearing released by the court clerk.

The city of La Joya purchased Lot 112 in the Palmshores Subdivision, which is located northwest of Walker Lake, for $39,500 in February 2017.

“At the time of the sale, the defendant knew that the fair market value of Lot 112 was approximately $15,500,” Assistant U.S. Attorney Sarina S. DiPiazza said Tuesday morning, when she read the factual basis for the plea. “However, he used his position as the city administrator to get the city of La Joya, utilizing city funds, to purchase the property at an inflated rate, thereby receiving at least $24,000 that he was not entitled to.”

Who owned the property remains unclear.

The deed lists Alaniz’s sister, Blanca Valdez, as the property owner. However, when he pleaded guilty on Tuesday morning, Alaniz said he owned the property.

News about the plea sent a shockwave through La Joya, where Mayor Jose A. “Fito” Salinas is running for re-election against two opponents.

“It just shows what kind of stuff is going on here at the city,” said mayoral candidate Jaime Gaitan, a U.S. Army JROTC instructor for the La Joya school district. “We don’t know what other hidden things are going on. And that’s one of the reasons that we’re running.”

Land Deals
Mike Alaniz, 56, of Palmview spent nearly 20 years at La Joya City Hall. He resigned in June, when the Progress Times reported that FBI agents had started asking questions about a series of suspicious land deals that involved Alaniz, his sister and the city of La Joya.

When the La Joya EDC board met in July, the meeting agenda included: “Discussion and action, if any, regarding LJEDC bidding on Tax Foreclosed Property Lots located within the Palmshores Subdivision,” according to a copy of the meeting minutes released by the city. “A motion to go to second auction for possible purchase of lots was made by Ricardo Perez, Juan J. Garza second the motion, all in favor, motion was carried unanimously.”

La Joya released a copy of the meeting minutes, which aren’t signed, under the Texas Public Information Act.

The minutes purport to document a meeting held on Thursday, July 27, 2012. That date is actually a Friday.

In an email from federal prison, where he’s serving a 37-month sentence for conspiracy to commit wire fraud, Juan Jose “J.J.” Garza said he didn’t remember seconding the motion. He suggested the document may be fake.

The La Joya EDC purchased five lots in the Palmshores Subdivision that day, according to documents kept by the Precinct 3 Constable’s Office.

After the auction, though, Alaniz and his sister took possession of the lots.

Alaniz had purchased lots for himself and lots for the La Joya EDC during the same auction, which caused the mix-up.

He attempted to fix the mistake in August 2015, when corrected warranty deeds transferred Lot 217 and Lot 203 to La Joya.

“I need your help to clear this pressing matter on these two (2) lots that have always belonged to the city of La Joya,” according to an email Alaniz wrote on Nov. 22, 2016. “Years back when we (city) purchased this two properties during an auction held by the county. I being the City Administrator purchased those properties for the city and was able to purchase two other lots for me personally.”

The mix-up also caused another problem for Alaniz.

Someone calculated the difference — $3,000 — on a copy of the check, which La Joya released under the Texas Public Information Act.

Alaniz didn’t pay back the money until March 8, 2019, when he wrote the city a personal check.

Lot 112
While the auction mix-up caused Alaniz plenty of problems, it was another land deal that prompted him to plead guilty Tuesday.

Alaniz or his sister, Blanca Valdez, paid $9,700 for Lot 112 during the August 2012 auction, according to records kept by the Precinct 3 Constable’s Office.

About five years later, the city of La Joya purchased Lot 112 from Valdez.

The Progress Times filed a public information request for all records documenting the purchase. La Joya couldn’t produce an independent appraisal or any records showing how Alaniz handled the conflict of interest.

While the deed lists his sister as the property owner, Alaniz apparently owned all or part of Lot 112.

“I used to sign all the checks,” Mayor Salinas said. “And that thing never came to me.”

Mayor Salinas said he didn’t know about the purchase until more than a year later, when he met with Alaniz and City Attorney Kennedy Salinas.

Alaniz admitted to buying the property, which prompted ethical questions, Mayor Salinas said, adding that any such purchase should be approved by the City Council.

Mayor Salinas said he asked for a copy of the check, which would show who approved the payment, but never received it.

“I want to clear myself,” Mayor Salinas said. “Because I never authorized anything by myself.”

The Plea
After he became aware of the investigation, Alaniz hired Mission-based attorney Rick Salinas, who frequently handles federal criminal cases. They struck a deal with prosecutors.

By negotiating a deal, Alaniz avoided a surprise arrest by FBI agents and the possibility of days in jail waiting for an initial appearance.

He waived indictment and pleaded guilty to a criminal information, a type of charging document frequently used when a defendant is cooperating with prosecutors, during an unannounced hearing Tuesday before U.S. District Judge Micaela Alvarez.

Alaniz pleaded guilty to one count of theft concerning programs receiving federal funds, which is punishable by a maximum of 10 years in prison.

Sentencing is scheduled for Jan. 9.