Despite its characterization as more of an issue in northern states, the opioid epidemic has spread throughout the country, and the data in South Texas is lacking. 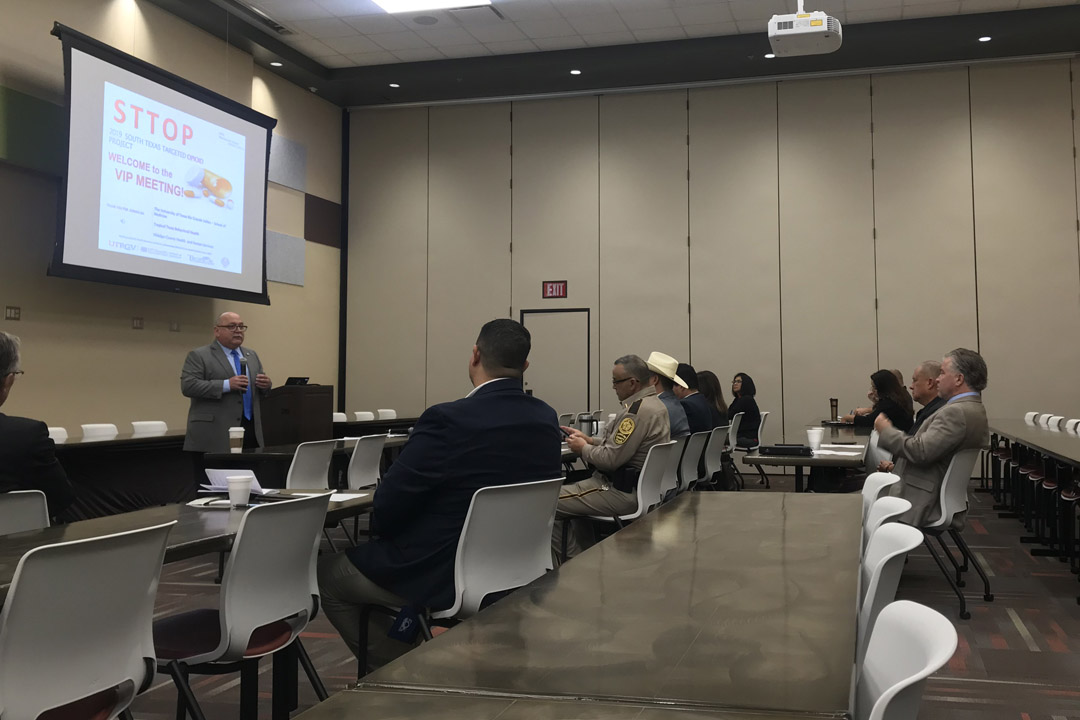 Funded by the Health Resources and Services Administration (HRSA) and the Area Health Education Center (AHEC) Program, the two-forum conference was held at the TTBH Conference and Training Center.

“This is extremely important for us all to work together on,&rdquo; Olivarez said. “The reality is, today we need to demonstrate an effort to try and get some collaboration, some support, some understanding in dealing with the national opioid crisis, along with state issues and South Texas issues.&rdquo;

The first forum included several leading officials, and Olivarez said they were to focus on how to get the data that is needed to draw funding and support for the opioid crisis in this area.

According to the National Institute on Drug Abuse, opioids are drugs like “heroin, synthetic opioids such as fentanyl and pain relievers available legally by prescription, such as oxycodone (OxyContin&reg;), hydrocodone (Vicodin&reg;), codeine, morphine, and many others.&rdquo;

The county said that the opioid epidemic “has presented many challenges including our understanding of how to advance pain management, how to improve and target overdose reversing drugs and how to improve the quality and availability of prevention, treatment and recovery services for opioid use disorder (OUD).&rdquo; Data collection for the rate of opioid abuse in the RGV is not comprehensive, and in order to address it the forum was held to coordinate some organization.

“I know a lot of people say opiates are not an issue for Hidalgo, Cameron or Willacy County,&rdquo; Olivarez said. “I beg to differ, I think it&rsquo;s a hidden area, an area that has been undercover for a long time, and not until recently has it come out.&rdquo;

Considered a comorbid disorder, abuse of opioids often occurs with other illnesses and medical issues, making it more difficult to track.

When TTBH Chief Executive Officer Terry Crocker spoke during the forum, he said that Tropical Texas Behavioral Health will continue to put resources into the treatment of substance abuse disorders.

“Historically, for many years that wasn&rsquo;t Tropical&rsquo;s focus,&rdquo; Crocker said. “A few years back we took a very orchestrated move to start growing what we&rsquo;re doing.&rdquo;

Crocker noted that Brando Morales is serving as their director of Substance Abuse Services, and they are concentrating efforts in order to start the path toward data collection and treatment options.

Dr. John Ronnau, the Senior Associate Dean for Community Health Partnerships and the Program Director for the Area Health Education Centers with the UTRGV School of Medicine, mentioned the efforts being made to educate people about the opioid crisis.

“In the past year or so, we&rsquo;ve been producing a series of workshops up and down our three counties: Cameron, Hidalgo and Starr, on four different topics,&rdquo; Ronnau said. “One is recognition and treatment of opioid use disorders and other substance abuse disorders, we also do a workshop on screening, brief intervention and referral treatment, the third on behavioral health integration and the fourth on the effective use of technology on treatment.&rdquo;

“One of the issues here is we don&rsquo;t have a medical examiner system, and we&rsquo;re probably not going to get one for a long time, they just upped the requirements to a two million person population,&rdquo; Farley said. “So as long as you don&rsquo;t have that, you&rsquo;re not getting all your cases of overdoses.&rdquo;

Farley said that if the case is an overdose and there are medications around, there are a few judges in the county that will not send the body to the forensic pathologists.

“In fact, one of the cases I&rsquo;m getting this afternoon went straight to the funeral home and was thought to be an overdose, and they were just going to sign the death certificate [as such],&rdquo; Farley said. “And they were going to let it go.&rdquo;

The county, along with TTBH and UTRGV, are concerned with the lack of data collection on opioid use in the RGV and South Texas. Olivarez stated that it was important to collect information about this particular substance abuse because of the implications medically, the nature of how many opioids are being found by law enforcement, our proximity to the U.S./Mexico border and funding.

Data collection also becomes tricky when dealing with how overdoses occur and what causes them – Farley said that people have the capability to develop a tolerance, and TTBH Chief Medical Officer Dr. Daniel Gutierrez said a combination of opioids and benzodiazepines (such as medications for anxiety, epileptic seizures and spasms) can be fatal.

“They [those experiencing this illness] have an issue of dependency,&rdquo; Gutierrez said. “We have found that one-third of the people that die of opioid overdose were also on benzodiazepines, so we&rsquo;ve been looking at that closely.&rdquo;

Dr. Adrian Sandoval, a clinical pharmacy specialist and assistant professor at the UTRGV medical school, spoke on the tolerance people can develop for opioids.

“We have receptors in our brain that become less sensitive, or be downregulated or removed as we expose it to more medication,&rdquo; Sandoval said. “From a community standpoint, for first responders, it would be difficult to determine a person&rsquo;s tolerance, you wouldn&rsquo;t necessarily know that – every person is different.&rdquo;

Crocker said there is a state-wide and nationwide focus on this issue, so money has been made available for it, but TTBH does not see any data to highlight if there is a problem or how big it is.

The Hidalgo County Health Department, TTBH and UTRGV are aiming to get a grasp on solid data collection for state and federal funding that can be brought down and used to fight opioid abuse in South Texas.