Despite accepting a job as the executive director at Edinburg’s Museum of South Texas History in 1989, Shan Rankin never considered herself a historian.

“It’s been 30 years of worrying,” Rankin, 69, said. “I’m not the historian I’m the person who worries about how things are running, that kind of thing. But along the way I’ve been privileged to work with several wonderful people these last three decades.” 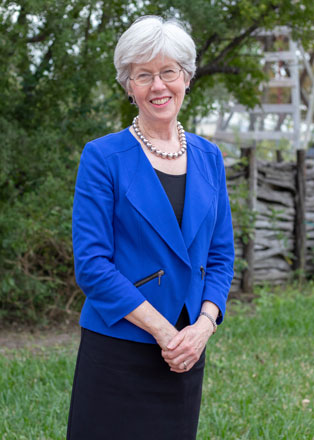 Last month, the museum announced the hiring of her successor-Edcouch Elsa native Francisco Guajardo-with Rankin continuing to serve as executive director to help with the transition.

When Rankin steps down at the end of the year, she will leave behind a museum she has helped build into one that serves thousands of visitors per year after overseeing multiple expansions and securing accreditation by the American Alliance of Museums.

“The museum shares with the community the stories of our region. One of the hopes we had is that when people come, we’d bring the kind of museum experience you’d have in San Antonio here so you don’t have to travel,” Rankin said. “There’s a lot of people who don’t leave the Valley. There’s 12,000-15,000 school children coming to the museum every year, that may be their only visit. We want to be really high quality.”

In honor of her work, Rankin was recognized Tuesday, Oct. 8 by Hidalgo County Commissioner’s Court for her three decades of service. Rankin reflected on her years as director following this recognition.

“I think we’ve grown gradually and we’ve done it in a financially responsible way,” Rankin said. “When I started, the endowment fund was $50,000, it’s now almost $4 million. The budget was $200,000 and now it’s $1.8 million and we’ve tripled in staff over the years. The county has been our partner the whole time I’ve been here.”

1989
When Rankin was hired by the museum, she had only been serving on the museum’s board of directors for three months.

“I don’t know why they invited me to apply but they did. I had no experience,” Rankin said.

Rankin had previously worked under state Sen. John Tower as his secretary before moving back to the Valley to help her veterinarian father in his office and in raising wild pigs.

Rankin, who was politically active, had attended a Republican Convention in Corpus Christi where she met her husband-local radio talk show host Davis Rankin. She also served on the board of regents for Pan American University while serving at the museum board.

“Even though I didn’t have museum experience, everything I’ve done in the past came together here,” Rankin said. “I’ve worked with politics and in this job you need to work with politicians so it’s better to know how it works. I majored in political science with a concentration in Latin American affairs and learned Spanish and with my business degree, I worked with my dad and knew how to work in a real world environment. I wasn’t a curator but I had a broad enough background and life experience that it helped me do this job and learn on the job.”

Once she was hired, Rankin became responsible for the museum and its $200,000 budget and staff of seven.
At the time, the museum encompassed only of the jail, the wing attached to it and a recently acquired abandoned H-E-B building that held exhibits and offices.

“That was it, it was tiny,” Rankin said. “The courtyard we have now was a driveway that cars frequently used at the time. I didn’t come in with a plan to change, I wanted to learn how it was all done. But we had a great team of people and we’d always talk about how to improve stuff. We had a board who trusted us and we’d all work together.”

Thanks to the support of employees and the board-who allowed Rankin to travel to museum conferences to learn how other museums are run, Rankin said she began to develop ideas on how to help the museum grow.

She nurtured the newly created Heritage Association Program-where members of the public donate annually to the museum. Rankin says that the program currently boasts more than 200 members who donate at least $1,350 per year.

Another highlight, Rankin said, was the multiple capital improvement projects to expand the museum. Among them was a $6.5 million project that created the museum’s two story grand lobby in 2003. The museum is undergoing a $2.8 million project to renovate its historic jail.
“Before those projects, we were just cramming things in small offices we had and were only displaying miniatures instead of our full collection,” Rankin said. “It was a motivation to do what we did to get our collection out of a flood prone building into a secure location.”

Following construction of the lobby, the museum applied to become an accredited institution by the American Alliance of Museums, which was granted to the museum in 2011, Rankin said.

“It means we meet the national standards of museums that they are expected to meet to be properly performing,” Rankin explained, noting that only three percent of museums in the country are accredited. “It means we are running the facilities appropriately and fulfilling our mission to preserve and present the borderland heritage of south Texas and northeastern Mexico.”

“We have a wonderful, rich history worth sharing and we hope that as families walk through the museum, they see something that will spark the telling of the story of their own family,” Rankin said. “That does happen. When I’ve given a tour and people see some of the stuff like the orno we have on display and the person I was with gasped and commented on how her grandmother had an orno just like that and started talking about her, sharing those stories. It’s definitely enabling us to collect more. If we’re not collecting it, it’s disappearing.”

Those stories, Rankin said, are what can help develop a lifelong love of learning to visitors.

“It makes us proud of who we are in the region we come from,” Rankin explained. “It’s very important for everyone, children and adults, to have a sense of place and belonging. If you know the stories of your place, you can fit yourself into those stories and have a sense of belonging.

For the next several weeks, Rankin will oversee the completion of the jail renovation and other projects she said she’d like to have completed before she leaves.

“After that I won’t know what I’ll do during my retirement, but I know I’ll look back very fondly on these last 30 years,” Rankin said. “I’ve made a lot of good friends and all the accomplishments here were done not by myself, but with a group of people who also put their heart and energy toward this. I’m very grateful for that. It’s been a great run. I walk into this museum and look around and it makes me proud. If we continue to expand lives and appreciation of who we are here, then we’re doing what we’re supposed to be doing.”