Eight weeks into the Valley high school football season, four of the seven teams from the Mission, Sharyland and La Joya school districts, the Big 7, continue to exert their dominance over their opponents.

With combined district records of 18-1, the Mission Veterans Patriots, the Mission Eagles, the Pioneer Diamondbacks and the Palmview Lobos are all either atop their respective district standings or within one game of the top. 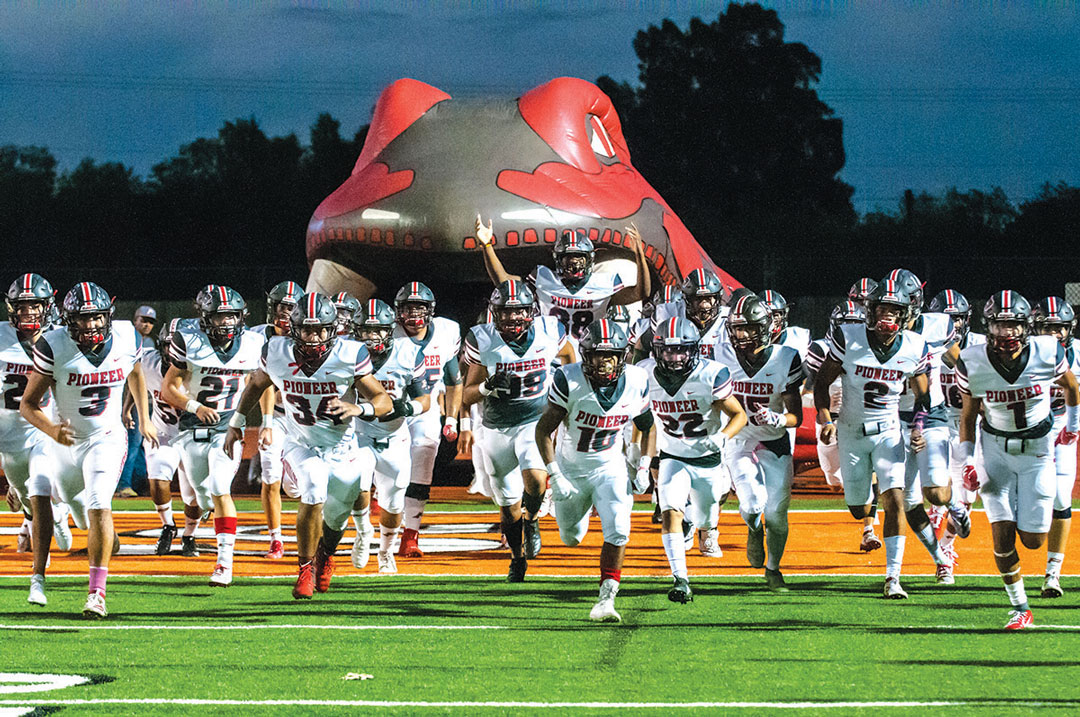 And with only three weeks left in the regular season, the likelihood of these four teams all claiming either outright or co-district championships is becoming more and more of a reality.

Of the remaining three teams, the Sharyland Rattlers, the La Joya Coyotes and the Juarez-Lincoln Huskies, the Rattlers are the only team that remains in control of its own playoff destiny. That’s because with identical 1-3 district records, the Coyotes and the Huskies not only need to win-out to claim a playoff berth, but they will also be needing at least one of the teams ahead of them in the standings to lose-out.

While all seven Big 7 teams are in action this week, the Patriots hosted Brownsville Pace last night and the Lobos will be traveling to Brownsville to play the Lopez Lobos tomorrow night. That leaves five games involving Big 7 teams on tonight’s schedule. With the Nikki Rowe Warriors at the Mission Eagles being previewed separately as the Progress Times game of the week, we will look at the other four games on tonight’s schedule here.

Laredo Cigarroa Toros at Pioneer Diamondbacks
Coming off their decisive 63-28 win over the Sharyland Rattlers, the 3-0 (6-1 overall) Diamondbacks continue scoring an average of 50-plus points per game. And Pioneer junior quarterback Eddie Lee Marburger continues to account for the majority of the Diamondbacks’ yards and points.

Case in point, against the Rattlers last week, Marburger completed 29 of 40 pass attempts for 326 yards and five touchdowns. He also ran the ball 13 times for 123 yards and two touchdowns against Sharyland. That’s seven of the eight offensive touchdowns Pioneer scored last week either coming as a result of Marburger’s arm or his legs.

Until he figures out a way of throwing a touchdown pass to himself, Marburger needs receivers to throw the ball to. Four of his favorite targets to throw to are junior Gavin de la Garza and seniors Luke Padilla, Allen Davila and Lavar Lindo.

On the ground, junior Tristan Castillo has 55 carries for 282 yards and five touchdowns, while junior Taylor Esparza has 29 carries for 135 yards thus far this season. Pioneer’s top rusher however is Marburger with 59 carries for 477 yards and seven touchdowns.

The Toros are 0-3 in District 16-5A-II this season and 1-6 overall. In seven games they’ve scored on 72 points while giving up 257. Last year the Diamondbacks defeated the Toros by a score of 28-7.

Juarez-Lincoln Huskies at McAllen Memorial Mustangs
The 1-3 (2-5 overall) Huskies broke their five game losing streak last week by defeating the La Joya Coyotes by a score of 49-42. The week before they came as close as you can come to defeating the 4-0 (6-1 overall) Mission Eagles when after scoring 30 points in the first half they failed to score a single point in the second half. That game ended in a 31-30 victory for the Eagles.

While the Huskies seemed to have turned things around the past two weeks, they will have their hands full tonight against the 3-1 (6-1 overall) Mustangs who are scoring an average of nearly 42 points per game. The Mustangs’ big offensive weapon is senior running back Campbell Speights. Thus far this season, Speights has carried the ball 157 times for 1,567 yards and 25 touchdowns.

Last year the Mustangs defeated the Huskies by a score of 30-7.

PSJA North Raiders at La Joya High Coyotes
Just when it looked as if the 1-3 (3-4 overall) La Joya Coyotes were back on the track to making a playoff run, they fall victim to the Juarez-Lincoln Huskies by a score of 49-42 last week. Their 14-7 win over the McAllen High Bulldogs the week before broke a three game losing streak and should’ve given the Coyotes momentum going into the Juarez-Lincoln game. However, as Coyotes’ head coach Reuben Farias said prior to that game, “When we play our sister schools, records don’t matter.”

Tonight the Coyotes will be hosting the 1-3 (3-4 overall) PSJA North Raiders who despite having a losing record have outscored their opponents 166 – 141 thus far this season. After winning three of their first four games, the Raiders have lost three games in a row. Their most recent setback was to the Mission Eagles by a score of 30-13.

Last year, the Raiders defeated the Coyotes by a score of 40-14.

Sharyland Rattlers at Mercedes Tigers
It’s been an up-and-down season for the 2-2 (4-4 overall) Sharyland Rattlers to say the least. After alternating wins and losses the first four weeks of the season, the Rattlers won back-to-back games in Weeks 5 and 6 only to lose back-to-back games in Weeks 7 and 8. Their most recent loss coming last week at the hands of the Pioneer Diamondbacks by a score of 63-28.

In that game, Sharyland junior quarterback Benji Valdivia completed 16 of 25 pass attempts for 149 yards and two touchdowns. Senior Damian Pruneda carried the ball 13 times for 53 yards to finish as the Rattlers’ top rusher against the Diamondbacks.

The 2-1 (4-3 overall) Mercedes Tigers have had an up-and-down season as well. However, unlike the Rattlers, who will enter tonight’s game having lost two in a row, the Tigers have won three of their last four games including a 51-7 win over the Valley View Tigers last week.

Last year the Rattlers defeated the Tigers by a score of 45-7.