The Mission Eagles remained on top of the District 30-6A standings by virtue of their 24-10 victory over McAllen Rowe Friday night at Tom Landry Stadium.

The Eagles offense used two long touchdowns in the first half and forced two big turnovers in the second half to remain unbeaten in district with a 5-0 mark. The win improved the Eagles record to 7-1 on the year and also ensured a playoff berth for the second straight year. 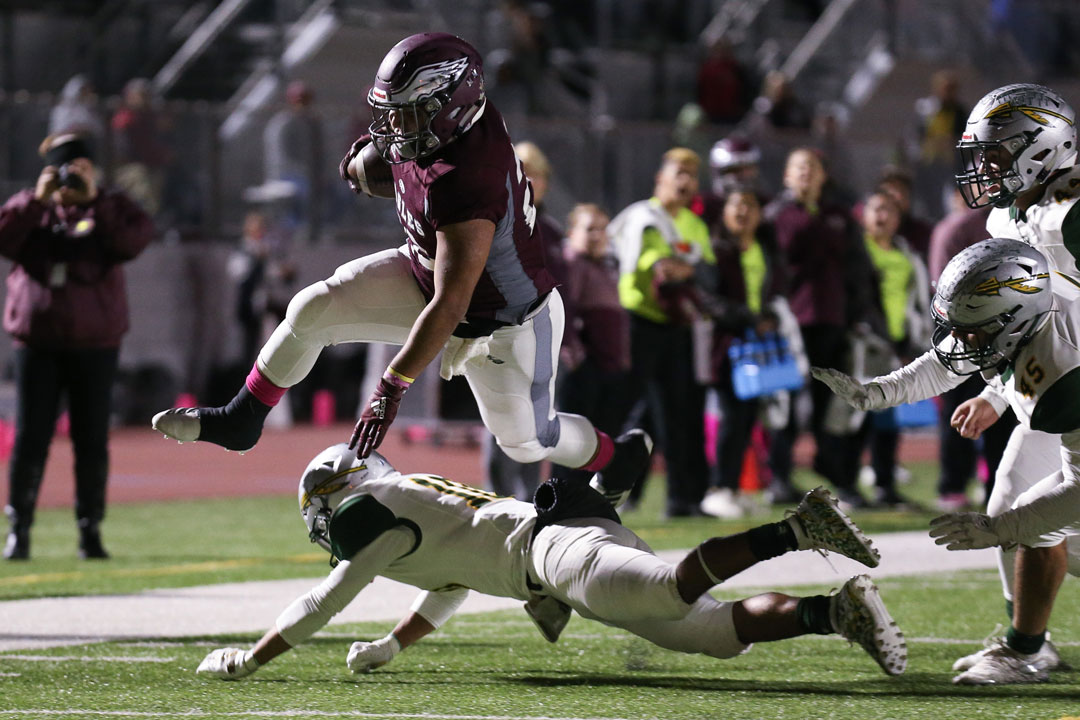 After falling behind 3-0, Mission quarterback Jeremy Duran connected with Jose Cortez on a 35 yard touchdown pass to take a 7-3 lead early in the second quarter. It was 14-3 after a 98 yard drive that ended with another 35 yard touchdown pass from Duran, this one to Steve Villarreal. Villarreal caught the ball near the line of scrimmage and raced into the end zone behind a number of good blocks.

Rowe cut the lead to 14-10 at the half but never got closer thanks to the Eagles defense. Luis Briseno picked up a Rowe fumble and ran it back deep into Rowe territory to set up Duran’s third touchdown pass of the night, a four yard toss to Andrew Maldonado that made it 21-10 in the third. A 36 yard field goal from Rene Rodriguez capped off an 80 yard drive and a 24-10 lead early in the fourth.

One more big defensive stop sealed the deal. With Rowe threatening near the Mission end zone Dante Lopez forced a fumble that was recovered by Luis Balderas, securing the second half shutout.

“We’re really proud of our defense tonight,” said Mission Coach Koy Detmer. “Our guys stepped up to the challenge and what I was really proud of was there was some bend in there but they always came out and found a way to make a play. They got a couple of turnovers that were huge for us.”

Lopez commented on what was one of the keys on the night defensively. “(Our) coaches had a plan and everyone executed it to the best of their ability.”

The offense was solid again too, avoiding the turnovers that plagued Rowe, answering an early deficit with a touchdown drive and taking advantage of a short field when the defense provided it.

Offensive lineman Steven Alvarez talked about what it took to get the job done. “The offensive line really came together as a group today. We’ve been saying how we need to step up and have a game where we all worked as a unit. I think today was that game.”

Quarterback Jeremy Duran summed up what most of those associated with the Eagles program probably felt when the game ended.

“It always feels good to win a big game.”

They won’t have to wait long for another big game either.

The PSJA Bears, sitting right behind the Eagles at 4-1 in the district standings, will visit Tom Landry Stadium Friday, November 1 at 7:30 pm.