Born with low vision, Ezra’s mother Rosa said they noticed his eyes moving “differently” when he was three months old – and he has been wearing glasses ever since. 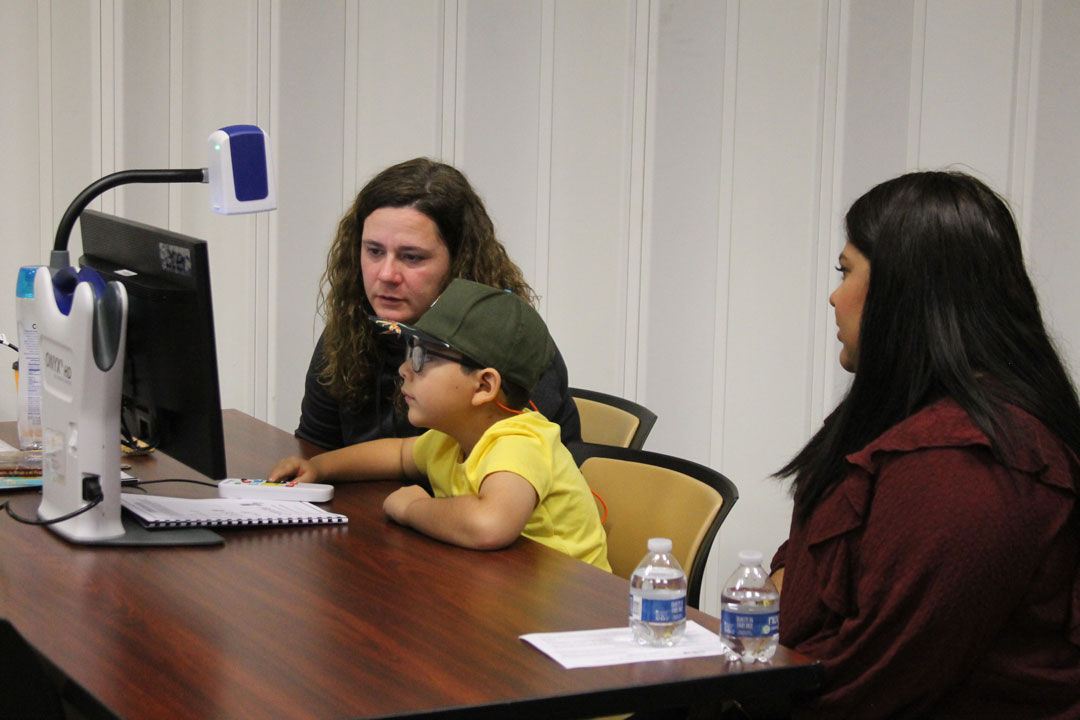 This week, they received advanced technological equipment that will hopefully make Ezra&rsquo;s day-to-day a bit easier.

On Monday, Oct. 21, Sight Savers America set up a clinic at the Region One Education Service Center and provided 30 qualifying students from districts in the region with new Onyx Desktop Electronic Video Magnifiers (EVMs) and other assistive tech. A national non-profit organization, representatives from Sight Savers were present at the clinic to teach the students and their parents how the EVMs operate.

Ezra and his mother made the drive from their home in Rio Hondo to Edinburg to receive the new tech. Ezra enjoys attending school, and math is his favorite subject.

“I&rsquo;ve been in first grade a bunch of days already, I can&rsquo;t even be nervous,&rdquo; Ezra said after bending his face down close to the sign-in sheet as he wrote his name. “It feels good.&rdquo;

Rosa was glad to see her son receive the assistive technology.

Onyx EVMs are considered “life-changing, allowing each student to make the most of his or her vision&rdquo; according to a press release from Sight Savers America. The device enhances contrast on a 22-inch monitor, and includes a camera that allows students to magnify objects and text up to 118 times.

Sight Savers also said that EVMs open a new world of opportunity up to a student, allowing them to read, write, complete assignments and see things more clearly.

Matt Daw, a Manager of the Low Vision Program with Sight Savers America, noted that it&rsquo;s not just about academics when it comes to the benefits of assistive technology.

“They can point the camera to themselves for personal grooming,&rdquo; Daw said. “It almost acts like a mirror. That&rsquo;s very important so they can use it for personal, everyday use as well.&rdquo;

Daw noted that taking part in this program is about making a difference and having a positive impact on the community as a whole.

“We help children and adults,&rdquo; Daw said. “And it really gives them the opportunity to improve anywhere from reading and writing, sorting their mail, looking at recipes, watching TV or using their electronics and all the different aspects and activities can be done with this equipment.&rdquo;

Typically running upwards of $3,500, the low vision technology is not typically covered by any type of medical insurance, and more expensive than most families can afford. Funding for this round of Onyx EVMs was gathered via donations from the Reading Resource Fund of Communities Foundation of Texas, Brownsville Foundation for Health and Education, the George and Fay Young Foundation and Vispero.

Region One Education Specialist Twinkle Morgan, who helped identify the students and referred them to the program, said it was great to observe the impact it has on the students in the area.

“They have things like this at school and they get to use them, but this is for them to keep forever,&rdquo; Morgan said. “They&rsquo;re not dependent on the school-issued property.&rdquo;

There have been two other clinics held at Region One by Sight Savers, one earlier this year and another held in 2018. Along with Morgan, the Region One Program for Visual Impairments, Region One ESC, low vision experts, Dr. Nancy Amir and Dr. Kathleen Freeman (who also provided the evaluations needed to recommend the EVMs) and teachers of the visually impaired were part of the process in getting this tech to students in need.

Susie Andrews from Wil-Cam Co-Op, works with visually impaired and special needs students from Region One in several small districts in San Perlita, Raymondville, Lasara and Santa Rosa. Andrews had the opportunity to see one of her students receive an EVM this week.

“He tells me ‘Now it will be easier when I do my homework at home,&rsquo;&rdquo; Andrews said. “Right now he&rsquo;s using an iPad, and he uses it to magnify his work. Now, he&rsquo;ll have access to a full screen, and that&rsquo;s perfect for him.&rdquo;

Christal Vision provided the EVMs that the students were able to take home that day. Sight Savers America will also be providing students with extensive follow-up eye care annually, maintain the equipment as it is needed and will keep all the student&rsquo;s records for analysis of their progress with the equipment until they turn 19 years old.

For Ezra – who enjoys playing with his sister and Stella, the family beagle – the new Onyx EVM means reading, writing and schoolwork are tasks he will be ready to tackle. He said he was a bit unsure at first, but was excited to learn how to navigate the tools he now has access to.

“I don&rsquo;t know how it&rsquo;s going to be,&rdquo; Ezra said. “I&rsquo;m looking forward to getting my stuff so I can see more good.&rdquo;