Fernando Eufemio Galan, born March 20, 1929, entered the presence of his Lord and Savior on October 7, 2019. With family near him, he fought a strong fight on his short battle of kidney cancer and he passed peacefully with many family members coming to surround him with love at Vitas Hospice at the Methodist Hospital in San Antonio.

He had been transferred from a short stay at Brooks Army Medical Center (BAMC) in San Antonio, and the family will be forever grateful for their amazing and respectful care. 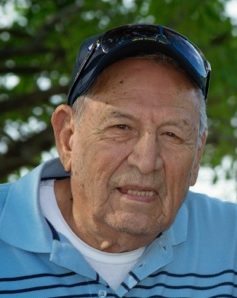 After living a long and beautiful 90 years of life, he has been finally reunited again in Heaven, with his wife of 65 years and high school sweetheart along with his first born son, his parents, and other loved ones. This life of 90 years brought great joy to him by way of his Faith, Family and the US Navy. He was a man with a deeply rooted faith and love for God; a man who always, always found unbridled happiness surrounded by his family which typically produced his larger-than-life laugh, full of emotion; and a Retired US Navy Chief Petty Officer who was incredibly patriotic and proud to be referred to as “Chief” and to have served in the US Navy for more than 30 years.

“Chief,” as he was referred to on many occasions, loved music and loved classic musicals like “My Fair Lady,” “The Sound of Music,” “Giant,” “The Wizard of Oz,” and the “Phantom of the Opera,” just to name a few. He didn’t play a musical instrument and didn’t carry a tune when singing at church, but when he had an opportunity to watch one of these shows or listen to these songs…it honestly didn’t matter. He memorized every word to every song and smiled from ear to ear, always able to appreciate the beauty and magnificence in each masterpiece. Therefore, our celebration of his life will include some of his favorites as a tribute to his love of music.

Funeral services will be held at El Mesias United Methodist Church in Mission, Texas, on Friday, November 8 at 12:30pm. Military Honors Ceremony will take place at Rio Grande Valley State Veterans Cemetery in Mission, TX at 2pm on the same day. The family asks that in lieu of flowers, donations can be made to the American Cancer Society, the American Legion, or Brooke Army Medical Center, San Antonio Military Medical Center (BAMC / SAMMC).