La Joya Palmview’s Alexis Gonzalez snared a tipped pass out of the air in the back of the end zone on the game’s last play to send the Lobos to a dramatic 37-35 victory over Mission Veterans tonight at La Joya ISD Stadium.

The Lobos victory creates a three way tie for first place in District 16-5A Div. I with one game left in the season. Palmview, Mission Veterans and Rio Grande City all sport identical 7-1 district records. 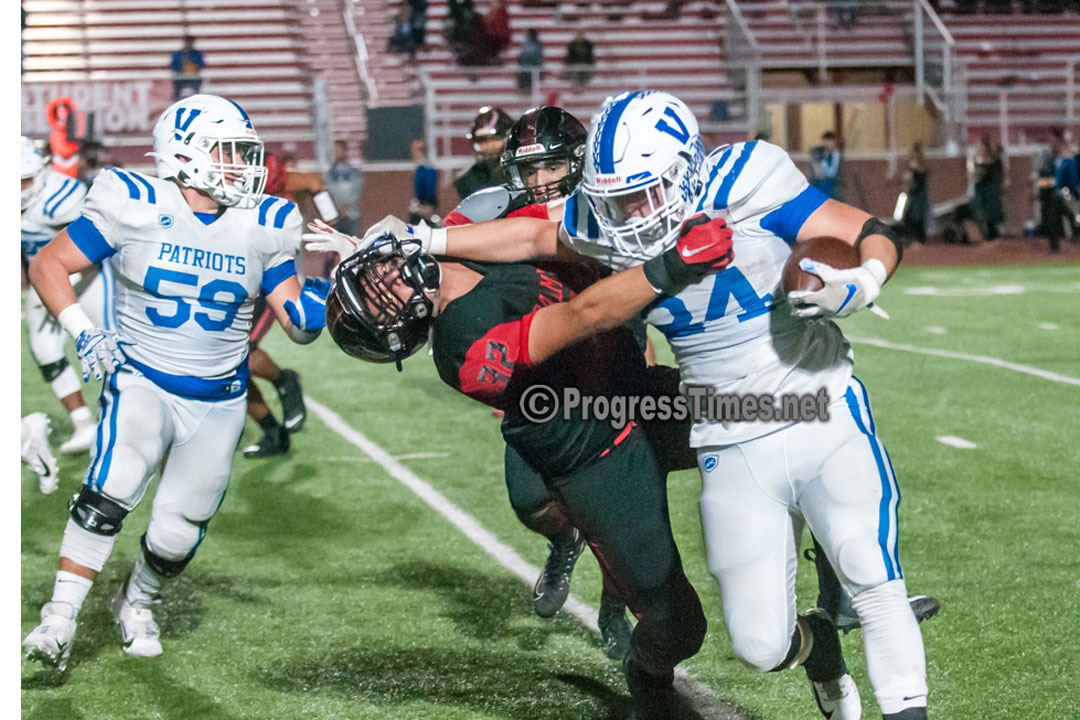 Veterans led 28-14 at the half but the Lobos cut the lead to 28-23 by the end of the third on a safety and a touchdown run from Carlos Pena. Another Pena touchdown, a 75 yarder, put the Lobos up 31-28 early in the fourth quarter. Veterans scored on their next possession to get the lead back 35-31 and then stopped Palmview on their next three possessions, the last one via a Michael De Anda interception that gave the Patriots a chance to run down the clock. Instead a bad snap on a punt and two penalties set up Palmview at the Patriots 11 yard line for one last play.

Lobos’ quarterback David Gonzalez rolled out left and fired a dart into the end zone that bounced off one Palmview receiver’s hands before it found its way to Alexis Gonzalez for the game winner.

“I’m speechless”, said Gonzalez about his catch and the big win. “My teammates are speechless, the coaches are speechless. Coach always says fight until the last second and that’s what we did.”

The Lobos had to come from behind on three different occasions to secure the victory, falling behind by 14 points two different times in the first half, mainly due to the play of Veterans quarterback AJ Gonzaque. The junior threw for 140 yards and two touchdowns and ran for 80 yards and two more touchdowns in helping Veterans build its halftime lead.

The Patriots defense was doing its job too; forcing two turnovers and continually bottling up the Lobos running attack.

But Palmview found a way to hang around. An AJ Chapa 56 yard touchdown run tied the game at 7 apiece in the first and a ten yard touchdown pass from David Gonzalez to Jerry Galvan cut a 21-7 deficit to 21-14 in the second.

After the break it was Palmview who took over.

“We just had to re-group and re-focus and that’s what we did,” said Lobos coach Margarito Requenez. “We just came back out and played ball.”

The Lobos defense forced Veterans to punt five times in the second half, one which resulted in a safety early in the third quarter that started a run of 17 unanswered points for Palmview, giving them their first lead of the game 31-28 early in the fourth.

Veterans answered with a 19 yard touchdown pass from Gonzaque to Isaiah Flores to regain the lead but had their next two possessions end in Lobos territory without being able to extend it. The first of those resulted in a missed field goal and the second a turnover on downs.

“We had a lot of chances to close the game out that we just didn’t do tonight. Palmview is a good football team and if you don’t close out a good football team you can get bit. It was a tough way for us to lose our district winning streak but we’re going to go out (next week) and play Brownsville Lopez and try to win a district championship.”

That defeat ended a 17 game district winning streak for Veterans that began in November of 2017. The chance to begin a new streak comes Friday November 8 at home against Brownsville Lopez.

Palmview is the team with the streak now. The big win was their seventh straight and they travel to Brownsville Thursday November 7 to face Brownsville Veterans to try to make it eight and perhaps, a district championship of their own.