Mission has a National Blue Ribbon School in their district, and recently received federal funding to put toward school violence prevention.

This Mon. Nov. 4, Congressman Henry Cuellar visited the Hilda C. Escobar/Alicia C. Rios Elementary School campus in the Mission Consolidated Independent School District in order to congratulate the teachers, staff and administration for being named a 2019 National Blue Ribbon School. The Blue Ribbon Program (which started in 1982) recognizes public and private primary and secondary schools across the country based on their overall academic excellence. 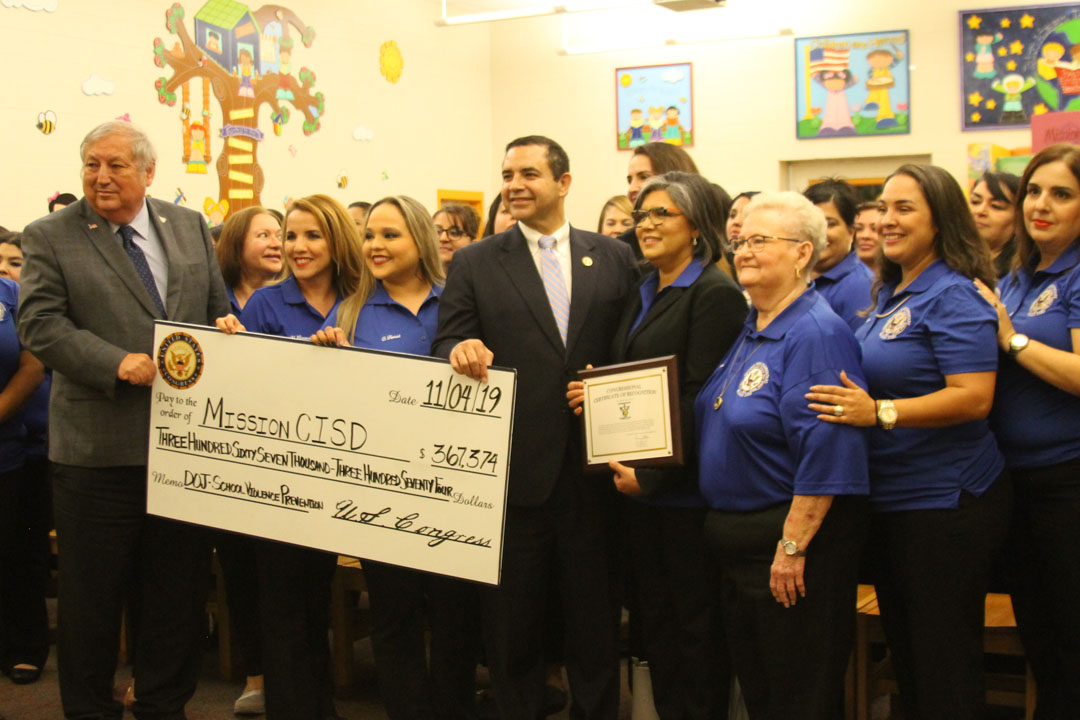 “I know firsthand the transformative power of education, and the unique role educators play in impacting a student&rsquo;s life,&rdquo; Cuellar said. “We want to make our kids better, and as parents we always want to make sure we leave something for our kids.&rdquo;

“The only thing you can get, and the only thing that can never be taken away, is a good education,&rdquo; Cuellar added. “I think it was President John F. Kennedy who said many years ago that the progress of a nation can be no swifter than the progress of its educational system, and this is why [their] work is so important.&rdquo;

Escobar/Rios Elementary is one of 28 schools in the state of Texas to receive this distinction, and will be meeting with the other 312 public and 50 private schools who share this honor at a national convention later this year. Blanca Lopez, the principal of Escobar/Rios, credited the students, teachers and employees who work to encourage achievement in the classroom.

“It&rsquo;s been a lot of hard work, and it&rsquo;s paying off,&rdquo; Lopez said. “Student success has always been at the forefront of what we believe here at Escobar/Rios Elementary. Hard work, commitment and teamwork contributed to this accomplishment.&rdquo;

Dr. Sharon Roberts, the MCISD Assistant Superintendent for Curriculum and Instruction, spoke highly of the feat accomplished at Escobar/Rios.

“This is something major, it is the highest honor you can achieve in the United States,&rdquo; Roberts said. “Here at Escobar/Rios, 99 percent of our kids are Hispanic, 88 percent are economically disadvantaged, 45 percent that are English learners and 76.19 percent are at-risk.&rdquo;
Roberts explained that at-risk students are in danger of dropping out of school, and that setting the foundation for promoting the benefits of an education starts at the elementary level.

“We want them to go on and accomplish their dreams,&rdquo; Roberts said, thanking the teachers and staff for contributing to that positive impact. “[The teachers and staff] said ‘You know what? It doesn&rsquo;t matter where they come from, they can do it and they will do it,&rsquo; and [they] proved that.&rdquo;

Mission Mayor Armando O&rsquo;ca&ntilde;a, who worked in education for over four decades before retiring earlier this year, said the city was proud to have an elementary representing them at the national level. O&rsquo;ca&ntilde;a challenged the teachers and staff to maintain this year&rsquo;s success moving forward.

During the congratulatory address, Cuellar also presented MCISD with a check for $367,374 in federal funding, received through the Dept. of Justice Community Oriented Policing Services (COPS) Office School Violence Prevention program. The grant funding will be used to improve security at K-12 schools in Mission CISD through evidence-based school safety programs, according to a press release from Cuellar&rsquo;s office.

“By improving school security infrastructure and providing training to teachers, school administrators and law enforcement, we can prevent senseless and tragic violence in our community,&rdquo; Cuellar said.

Cuellar added that with the increase of school violence-related incidents occurring across the country, keeping students safe is a top priority for providing the best learning environment.

“We&rsquo;re not in a perfect world, sometimes there are outside influences, or influences that come in and affect the work that you do,&rdquo; Cuellar said. “This is why this grant is important: to make sure that we provide a safe place for our students to learn.&rdquo;