The Mission Eagles wasted little time in getting on the board at La Joya ISD Stadium tonight, scoring on the game’s opening possession when Rene Anzaldua scampered into the end zone from 13 yards out for a 7-0 lead on a six play drive that took less than 3 minutes. Their second drive resulted in another score.

“It was awesome,” said Mission coach Koy Detmer about the quick start. “Coming off of last week our guys were ready to get back out there and get things going early.” 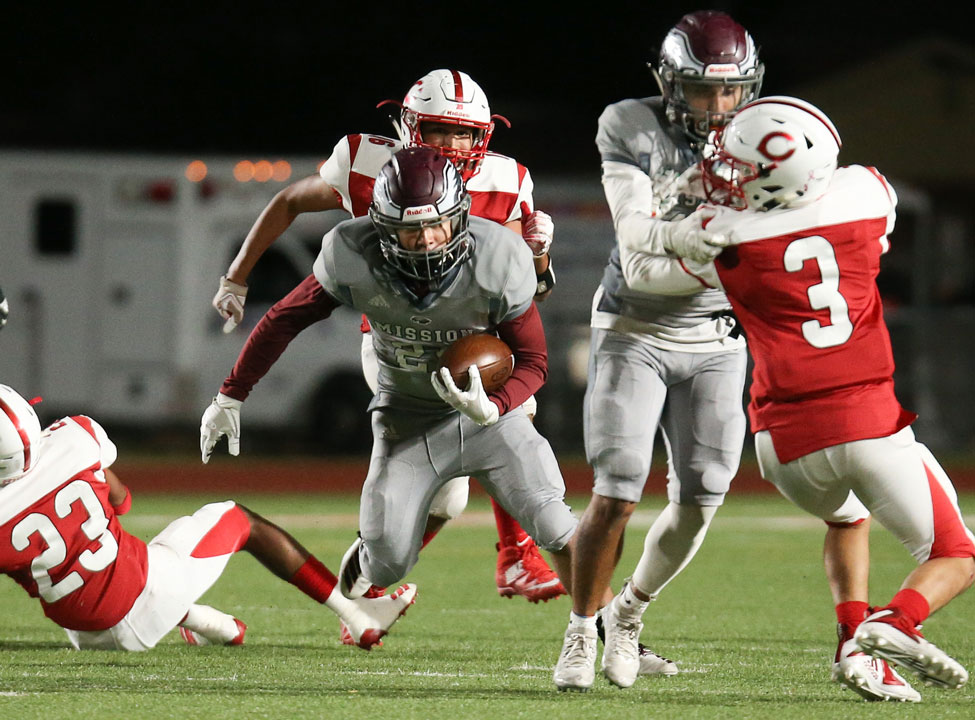 They didn’t waste too many of the rest of their first half opportunities either; scoring on three of their next four possessions on their way to a 36-0 halftime lead in an eventual 50-8 victory over the La Joya Coyotes that clinched a share of the District 30-6A title for the Eagles.

“It was back to how we expect to play ball. I was really proud of their execution,” added Detmer. “They played with a little urgency and intensity; it was good to see that energy.”

Mission’s fourth drive of the game highlighted just how dangerous their offense can be. Using a nine play drive that went 50 yards; the Eagles passed it four times, ran it five and utilized seven different players in the process. Quarterback Jeremy Duran’s one yard touchdown run ended that drive, putting them up 22-0.

Duran had his hand in every first half scoring drive; completing 12 of 16 passes for two touchdowns. The first was a 46 yarder to Sebastian Montes that made it 15-0. His second was a 28 yarder to Steve Villarreal just before halftime.

The defense was on point too, giving up only three first downs in the half, forcing one turnover and stopping La Joya on a fourth and one. They got on the scoreboard themselves when Julio Reyes ran another Coyote turnover back for a touchdown early in the third quarter.

In addition, Damian Cortez had two rushing scores for the Eagles.

“It was a good team effort,” said Detmer. “The defense went out there and took care of business, getting us the ball right back.”

It was also a title clinching effort and Detmer was obviously pleased with that too.

“It feels awesome. It took some time to get some things in place. It was a long haul but it feels good in the end. The hard work paid off.”

The Eagles closed out the regular season with a 6-1 district record and 8-2 overall. Information on their first round playoff game next week was not available.

La Joya ended their 2019 campaign at 2-5 in district play, 4-6 overall. It also brought an end to the career of their outstanding running back Eddie Villarreal. The senior rushed for over 3,000 yards the past two seasons.

“It was awesome to be part of this program for four years,” said Villarreal. “We have a good community and it was a nice experience to play for La Joya. I’ll always be a Coyote.”

Villarreal said he hopes to continue his playing career in college and that he would most remember how his coaches were always behind him, pushing him.

“I had a good career because of them.”