Fourth and fifth graders at Perez Elementary School learned about what constitutes as bullying, and how they can stand up to any kind of harassment in their environment. 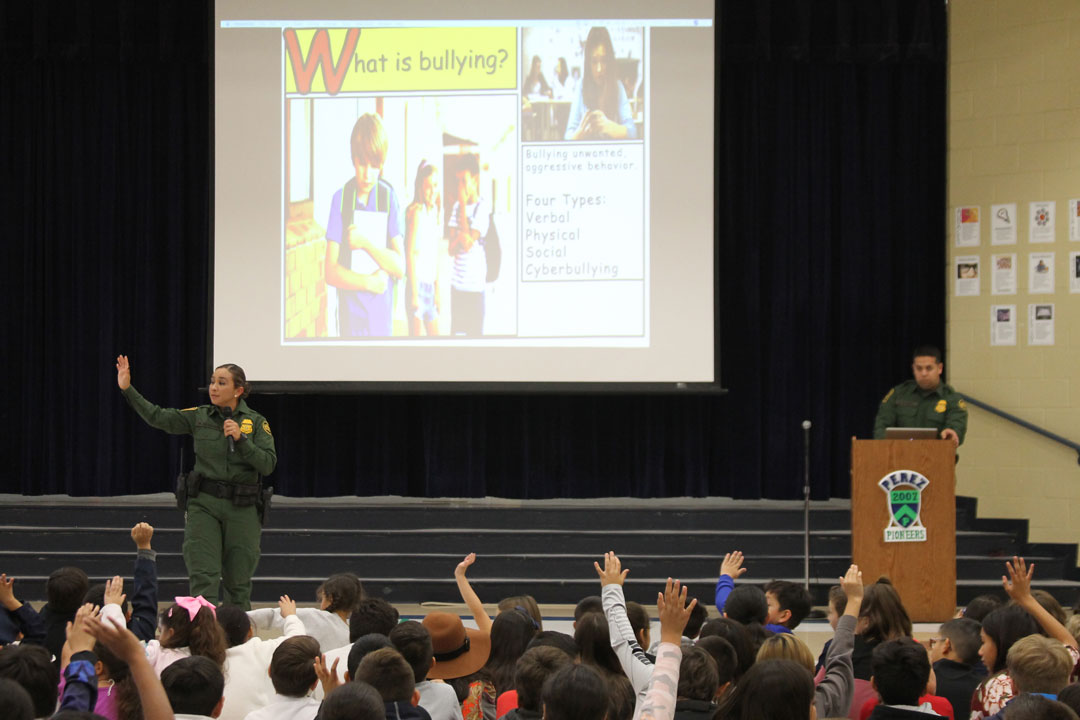 “Operation Stand Up” was held at the end of Perez Elementary’s Red Ribbon Week, which the school has expanded to include “stand up to drugs and bullying” since its inception in the mid-80’s. The assembly featured information about the negative effects of bullying, and the prevalence of cyberbullying today.

“There are four types of bullying: verbal, physical, social, and one of the most common one right now is cyberbullying,” Ontiveros said. “People are being mean through cell phones. It is being misused.”

Ontiveros noted that once something is posted on the Internet, it will stay there forever.

“Even if you delete it, there will always be a way for someone to look at it,” Ontiveros said, adding that what a person posts on their online profiles can negatively impact their future careers. “It stays on your file forever, it becomes public.”

The RGV Sector of the Border Patrol Community Liaison Program presents programs and events at primary and secondary schools throughout the community.

“A lot of our job entails coming out and talking about our employment, the perils of smuggling and taking drugs,” Martinez said. “Today, we’re rolling out a new anti-bullying initiative.”

The presentation included a video produced by the Border Patrol and created by drama students from Pharr-San Juan-Alamo Early College High School. The video took students through a day at school and the different examples of bullying students can be aware of.

“Our superhero is the one that defends, the one that stands up and says no,” Ontiveros said, asking the students to be that hero for others. “A lot of the time, kids bully because they think that we, the adults, don’t care. There are teachers, counselors, police officers and agents – we all care.”

Ontiveros added that bullies come from everywhere, and can come from anything, but their ways can always be changed for the better.

“You will always have support, you don’t deserve to be bullied,” Ontiveros said. “The first thing you should do is tell an adult, and keep track of everything when it happens so you can have a plan.”

Agent Martinez presented an example of how harassment and bullying can damage the people subjected to it – a white piece of paper. He asked a student to crumple it up into a ball, throw it on the ground and stomp on it.

When the student retrieved the sheet, Martinez unfurled it, and the small tears and folds on the paper were visible and impossible to remove.

“Every time that you come across somebody that makes fun of you, laughs at you, puts you down, it’s a scar or a wrinkle on your self esteem,” Martinez said. “They may apologize, they may say they’re sorry, they may say they never meant it, but they’re never going to get your self esteem back the way it was. Bullying doesn’t just happen, it’s not something you can apologize for and it’s going to go away.”

At the end of the assembly, the fourth and fifth grade students stood up and pledged to speak out about any bullying they witness or experience in the future. The pledge included calls to stand up in an effort to stop bullying, to treat others with respect, include others who are left out, to tell an adult if they witness bullying and help those who are bullied.

“When you stand up for that child who is being bullied, you become their superhero,” Ontiveros said. “You become someone that they can trust.”