A La Joya High School student became the first student in the La Joya school district this year to sign a letter of intent Monday to compete at the collegiate level in Kansas. 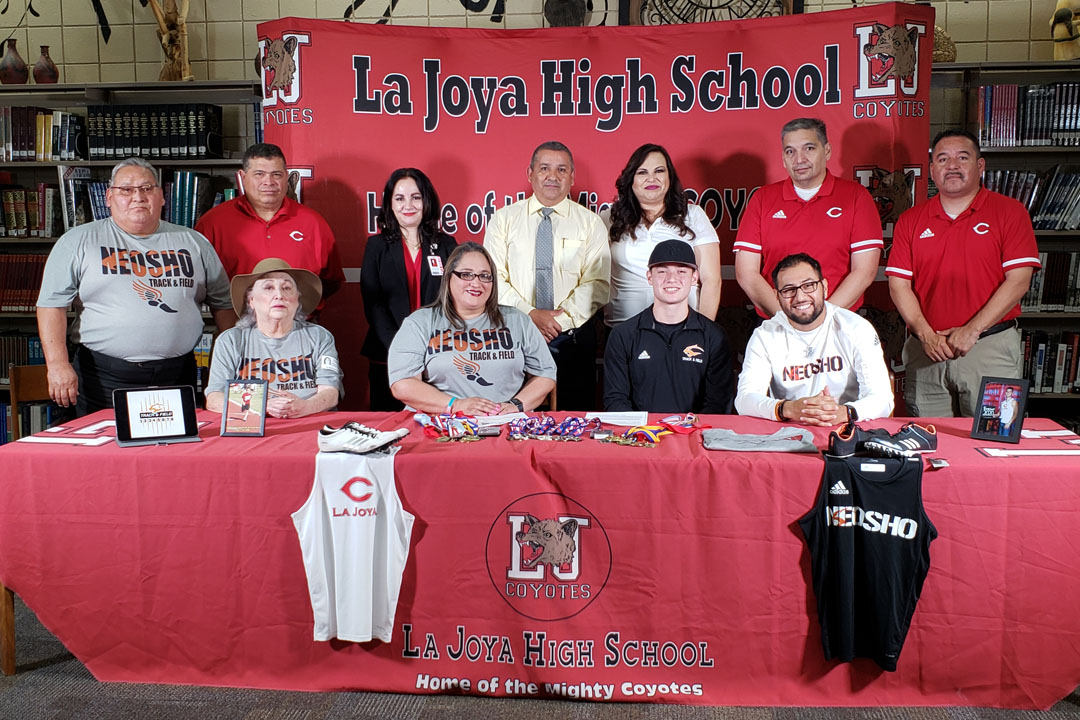 “It was an obvious choice.” Hernandez said after the signing.

The campus celebrated Hernandez’s accomplishment at a ceremony where he signed his letter surrounded by family, coaches and school officials including La Joya ISD Superintendent Gisela Saenz. During the ceremony, La Joya ISD athletic Director Victor Garza said Hernandez will receive a full ride scholarship to attend the college.

“This is a celebration to get you motivated, this could be you,” Garza told students at the signing. “I remember when AJ was a 7-year-old boy and when we were remodeling the stadium 10 years ago, he would run on the track every day. Now he is a young man, a mature young man who in May, will become a graduating coyote. We want to celebrate his accomplishments that have brought him to this point.”

At Neosho, Hernandez said he plans to study occupational therapy, which he said was influenced by dislocating his shoulders during his sophomore and junior years.

“I just want to help others. I’ve gone through a few injuries and overcame it with help from therapists and I want to do the same for other athletes,” Hernandez said. “I fell in love with the sport. I love the competition and the one on one where when the gun goes off, it’s just you and everyone else. It’s a race to the finish.”

“Hopefully I am bringing enough to Neosho. I am going to go out there to compete, do as much as I can and be able to do what I do.”

“I’ve known this kid forever, it’s a true blessing that I get to come down here to sign him,” Noe Hernandez said, adding that whenever Hernandez faced any obstacles in his athletic career, he’d always offer him the same advice to keep his head up.

“And look at where he’s at now,” Noe Hernandez said. “He will be great for the program I am trying to build, with him, we will be national champs next year. He has the heart, desire and love for it. That’s what got him here. This will be a new chapter in his life and he will continue his success in the classroom and track.”