It’s been a banner season for Big 7 football teams.

That’s because five of these seven teams from the Mission, Sharyland and La Joya school districts qualified for the UIL state playoffs and three of them did so as district champions. In addition, these same five teams won 30 of their 37 district games for a combined winning percentage of 81%. 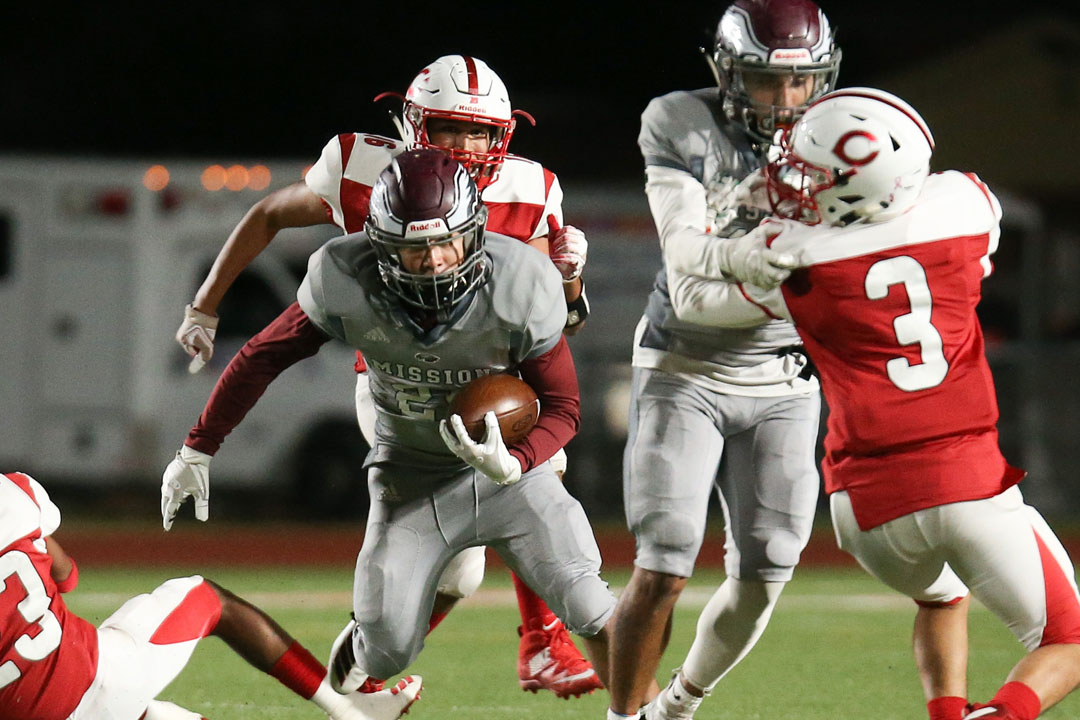 So while it has been a season to remember so far, the playoffs are like a whole new season. That’s because other than seeding and possible home-field advantage in the first round, whether a team cruised into the playoffs by going undefeated or struggled to earn the fourth seed in its respective district does not matter once they take to the gridiron for this week’s bi-district round of the playoffs. All that matters now is which team puts more points on the scoreboard regardless of their records and/or rankings prior to the playoffs.

Here we’ll take a look at three of the Big 7 teams that have earned the right to play on while so many others have seen their seasons come to an end.

Corpus Christi Veterans Eagles at Mission Veterans Patriots
For the eighth year in a row, and for 10 of the 11 seasons under Coach David Gilpin, the Mission Veterans Patriots have qualified for the UIL state playoffs. Their 8-1 District 16-5A-1 record also earned the Patriots their fourth district title in school history, all under Gilpin as well. This is the kind of consistent and continued success that most high school football coaches can only dream of achieving. And while qualifying for the playoffs once again may look like business as usual for Gilpin and his coaching staff, this season has been anything but usual for the Patriots.

“If you had told me that we would be playing our last two games without quarterback, Ricky Reyna, running back, Danny Cantu, wide receiver Mikey Garcia, defensive back Mike Gonzalez who has been in and out of the lineup with injuries all year long, linebacker Mike Rodriguez, who we lost on the second play of the game against Palmview through the first half of the Lopez game due to an ejection and without our top wide receiver A.J. Gonzaque, who has been filling in at quarterback, and that we would still be district champions with an 8-2 overall record and the number one seed heading into the playoffs, I may not have believed you,” Gilpin said. “While I would rather have won the title outright, I have no problem sharing it. The fact is that we have another gold ball so congratulations to Rio Grande City for them getting their first district championship in 34 years, but we got our third in a row this year and we’re really excited and proud of that.”

As of Monday of this week, Gilpin was not certain which of his injured players would be back in time for tonight’s game against 5-3 (7-3 overall) Corpus Christi Vets.

The fact that the Patriots have succeeded despite all these injuries is a testament to their next-man-up philosophy and the coaching staff’s ability to get the back-ups ready to play when needed.

In a rematch of last year’s third round playoff game which was played at the Alamodome and which Mission Veterans won by a score of 62-55, the No. 1 seed Patriots will be hosting the No. 4 seed Corpus Christi Veterans Eagles tonight at 7:30 at Tom Landry Hall of Fame Stadium.

“Corpus Christi Vets is not a true No. 4 seed,” Gilpin said. “They went into overtime against Corpus Christi Miller, a team that people are talking about winning a regional championship. It looked like we were going to play Victoria East but C.C. Vets lost another overtime game to Victoria West who is the No. 2 seed up there.

They’ve had some injuries at the quarterback position but their defense is playing extremely well, they’re lanky on offense and they’ve got a big offensive line, not height-wise but they’re big stocky guys. This is an outstanding football team.”

“For the luck of a ball bouncing the wrong way a couple of times, they could’ve been the district champions up there,” Gilpin added. “We would’ve liked to have drawn a team that is not quite as tough in the first round, but we’re going to have to play our best football game of the year and it’s going to take everything we’ve got Friday night to win our sixth straight bi-district championship.”

Laredo United Longhorns at Mission Eagles
In another rematch from last year’s playoffs, the 6-1 (8-2 overall) Mission Eagles will be facing off against the 5-1 (8-2 overall) Laredo United Longhorns tomorrow at 2 pm at Tom Landry Hall of Fame Stadium. These two teams met in the first round last year and despite a second half comeback in which the Eagles scored seven points in the third quarter and 21 in the fourth quarter, the Longhorns eliminated the Eagles by a score of 31-28.

When asked how the 2019 version of the Longhorns compares to the 2018 version, fourth year Mission head football coach Koy Detmer said, “They’re an outstanding football team again this year. They’ve got a great program over there with great participation in their athletic programs and in their football team. They seem to just reload every year. They’ve got a very good returning quarterback who is a senior, they’ve got good receivers and they’re good up front. They’ve a very solid team without a lot of weaknesses and they’re very well coached.”

While the Eagles have had their fair share of injuries this season, they are relatively healthy heading into tomorrow afternoon’s big game.

“We’ve hung in there okay,” Detmer said. “We had our share of injuries throughout the season, including the big one of our running back Horacio “Tito” Moronta. The other guys stepped in and did an outstanding job. We’ve had other injuries of linemen and defenders here and there but we’re about as healthy as we can ask for at this point in the season.”

With back-to-back playoff appearances and with their first district championship since the 2012 season, the Eagles will be looking to win their first playoff game since 2009. When asked what a win against the Longhorns tomorrow would mean to his players and the Eagles’ football program, Detmer said, “It would be a big deal for our team and our program, especially if we’re able to win a playoff game over an opponent that makes deep runs in the playoffs year-in-and-year-out like United. They’re always one of the top teams in this south Texas area so that would be a big accomplishment for us going forward.

We feel like we’ve taken good steps forward this year, however it would be a big deal for us to take another step forward by winning a playoff game.”

Palmview Lobos at Victoria West Warriors
The 7-2 (7-3 overall) Palmview Lobos will be traveling to Victoria to play the 6-2 (6-4 overall) Victoria West Warriors tonight at 7:30. Winners of their last five games, the Warriors will be looking for their first playoff victory since their 70-8 Area round win over the Mission Veterans Patriots in 2015. As for the Lobos, their last playoff victory came in 2014 when they defeated Laredo LBJ in the bi-district round. Last year the Lobos were eliminated in the bi-district round by the Flour Bluff Hornets by a score of 56-21.