A new tradition was born, and Veterans Day was extended throughout the weekend in Mission.

Last weekend, the city held several events that celebrated and honored veterans. Starting Friday afternoon and running through Monday, Mission was determined to keep veterans at the forefront. 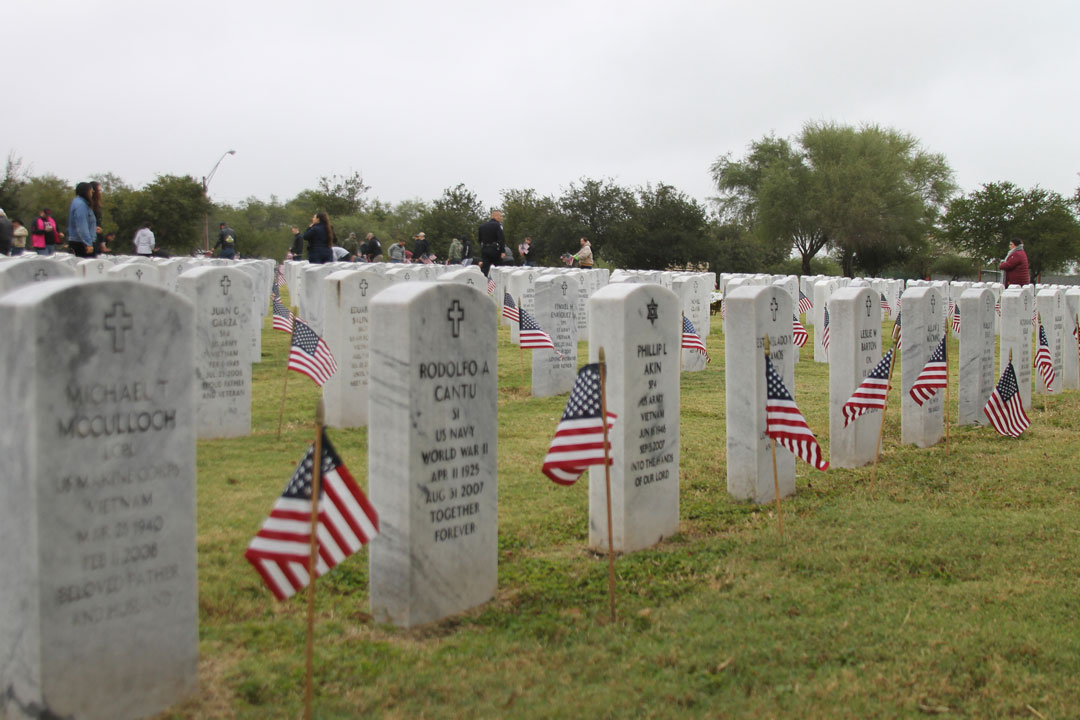 “My father was a veteran of World War II, I have two brothers that are veterans of Vietnam,&rdquo; O&rsquo;ca&ntilde;a said. “It&rsquo;s in honor of them, my family, and everybody else. I pledged that no veteran was going to be buried alone here in Mission, and veterans and their services will not go untold.&rdquo;

The first event, a flag laying ceremony held at the Rio Grande Valley State Veterans Cemetery, had people out in droves. One by one veterans, their loved ones and other residents gathered to place United States flags exactly one foot away from the final resting places of RGV veterans and their significant others.

O&rsquo;ca&ntilde;a and City Manager Randy Perez weathered the brisk overcast, wind and drizzling and planted the flags alongside first responders, active military and other veterans. O&rsquo;ca&ntilde;a was also able to plant a flag at the grave of his uncle.

“When I walked in, it seemed like it was a very lonely place,&rdquo; O&rsquo;ca&ntilde;a said of the cemetery before the flag ceremony began. “But the more I look at it and see the flags in a line, I think it is very caring for our people – to be able to come and lay a flag in front of the grave of a well-deserved veteran.&rdquo;

Over 75 entries were featured, most of which were patriotic golf carts decked out to the nines (and carrying veterans from all campaigns and conflicts).

Spearheaded by the Texas Citrus Fiesta, the Grand Marshal for the parade was Lieutenant Colonel Arnulfo Esqueda, a 1965 graduate of Mission High School. The veteran has 30 years of service to the country, and has been awarded the Legion of Merit, Bronze Star Medal and the Meritorious Service Medal.

The parade included an armored vehicle from the Mission Police Department and a few large floats from the Texas Citrus Fiesta, the city of Mission and the city of McAllen.

Following the parade, attendees gathered at the 5×5 Brewing Co., a local veteran-owned and operated brewery housed at the Mission Center for Education and Economic Development building. Outside, children enjoyed carnival rides, families listened to live music and ate food from local food trucks.

Roy Pe&ntilde;a, the Director of the American Legion Riders Post 93, was selling t-shirts to benefit their Veteran organization. A veteran of the United States Marines during the Vietnam era, Pe&ntilde;a was appreciative of the city for making Veterans Day a weekend-long celebration.

“It&rsquo;s really awesome what the city has done for the veterans,&rdquo; Pe&ntilde;a said. “It&rsquo;s not just a few, it&rsquo;s to honor everybody.&rdquo;

Pe&ntilde;a felt it was important to give back to veterans in the community.

“[This event] has been a long time coming,&rdquo; Pe&ntilde;a said. “We want to thank the mayor and city council for putting it on for us. It&rsquo;s well-deserved, and it turned out to be a lot more fruitful than we were expecting.&rdquo;