Playoff games often require teams to step up their games in order to win and advance. It makes sense since your opponent is a playoff caliber team too.

After an impressive regular season putting up staggering numbers it was hard to imagine how the Sharyland Pioneer Diamondbacks could get any better at running their fast paced, pass oriented offense. 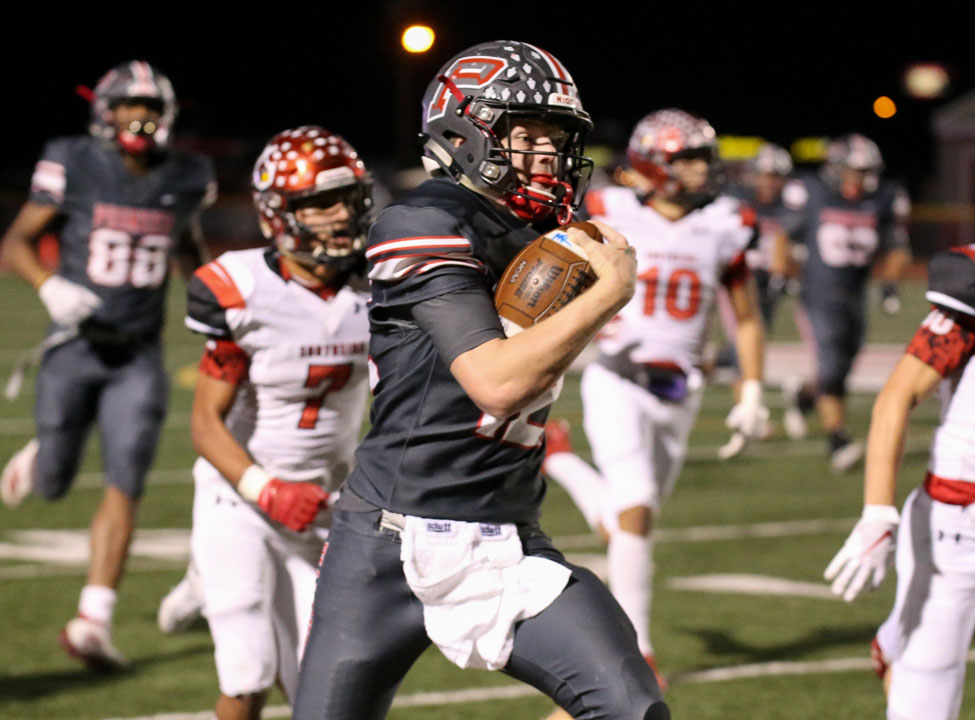 Their 59-14 victory over San Antonio Southside tonight at Richard Thompson Stadium was certainly impressive. The Diamondbacks scored touchdowns on all of their first half possessions to build a 42-0 halftime lead in a dominating display of both offense and defense. The offense scored six touchdowns; taking just a little more than five minutes of total possession for their part in building the big lead. Five of the six scoring drives were completed in five plays or less. All six drives were over 60 yards. Four of the touchdowns were for 46 yards or more.

“It was our offensive line,” said Pioneer quarterback Eddie Lee Marburger. “They deserve all the credit. Those guys are unbelievable.”

The play of that offensive line meant big numbers for Marburger. The junior completed 19 of 23 passes for 323 yards and three touchdowns and ran for 145 yards and three more scores. The Diamondbacks have other weapons too, and each contributed as well. Marburger’s three scoring passes went to three different receivers (Lavar Lindo, Evan Maldonado and Luke Padilla). Tristan Castillo had a 78 yard touchdown run along with another short run for a two point conversion. Oliver Olivarez kicked a 34 yard field goal and Chris Zapata scored a touchdown on a pass from Angelo Bazan.

On the other side of the ball the Diamondback defense stopped Southside on all seven of the Cardinals first half possessions. Three of those stops were on fourth down with Southside in Pioneer territory. They also recorded two takeaways in the second half.

“All year we (the defense) really haven’t gotten any recognition,” said defensive back Ethan Lee. “But we came and showed up.”

The all-around effort put a smile of satisfaction on the face of Pioneer coach Tom Lee. Last week the Diamondbacks won their first outright district championship in school history and the win tonight gave the sixth year school their first playoff victory after falling short three other times. The win improves Pioneer to 10-1 on the year.

“It feels great,” said Lee. “It was our number one goal, to make sure we win a playoff game this year. Our kids just came out and played tonight.”

They weren’t just playing for themselves either. Senior offensive lineman Sandalio Garcia said while it felt awesome to make history it was also a victory for those who have played for the Diamondbacks before.

“This game was dedicated to all those other seniors that came close (in other years). This game was for them.”

The chance to make more history comes next week when the Diamondbacks face Pflugerville Weiss. Details of that match up were not immediately available.