The city of Mission held pinning ceremonies for the civil servants, who have dedicated time and energy to protect the community. Their family members, peers and city leaders were present as they took their oaths to protect and serve. 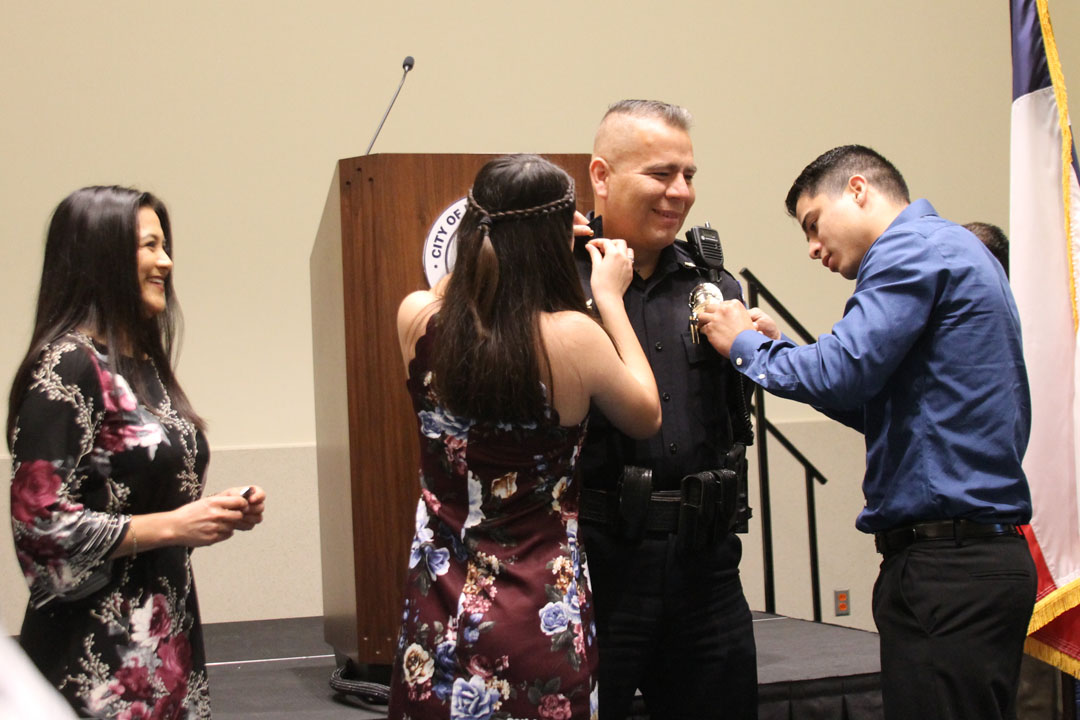 Lieutenant Ted Rodriguez was promoted to Assistant Police Chief at the Mission Event Center. Chief Robert Dominguez said that choosing an assistant chief was a difficult task, but one Rodriguez is up for.

“I’m glad Mr. Rodriguez has decided to take on the responsibility of being our assistant chief of police,” Dominguez said. “He’s going to be in charge of operations.”

Rodriguez was grateful for the opportunity to serve in more of a leadership position, starting his speech with a prayer. He was pinned by his wife and children.

“It’s amazing to be here, and it’s so awesome to get to this level,” Rodriguez said. “When Chief asked me, I accepted the position with humility and honor and said ‘I have served this community in various capacities, starting as a patrol officer.’ I love what I do.”

Assistant Police Chief Jody Tittle, who has moved to administration, noted that Rodriguez is one of the few city employees who have graduated from the Certified Public Manager course at UTRGV (other graduates include Tittle, City Manager Randy Perez, the Mission deputy city managers).

“He’s also anticipated to graduate from the Leadership Command College through Sam Houston State University in February; less than one percent of Texas peace officers hold the designation,” Tittle said. “It’s hard to get into and it’s hard to finish. He’s put in some work, and he’s worked his way up.”

Former Engineer Michael Reyes was promoted to Lieutenant at Mission City Hall. A second generation firefighter, Fire Chief Gilbert Sanchez said it was an honor to be part of Reyes’ promotion.

“His family has shown great dedication to public service,” Sanchez said. “This position has greater responsibility – now he’s in charge of a crew, assigned to a station and the apparatus of that station, and training within the station.”
Along with Reyes, two men became firefighters: Juan Villarreal and Jamie Flores. Family and coworkers watched as they were sworn in and pinned.