Do you believe in magic? Not the kind of on-stage magic that results in a woman being sawed in half but the kind of magic that makes you realize that you are witnessing something special; something you may have never seen before or may never see again.

That is the kind of magic that has been on display every single time that Sharyland Pioneer junior quarterback Eddie Lee Marburger has taken to the gridiron thus far this season. 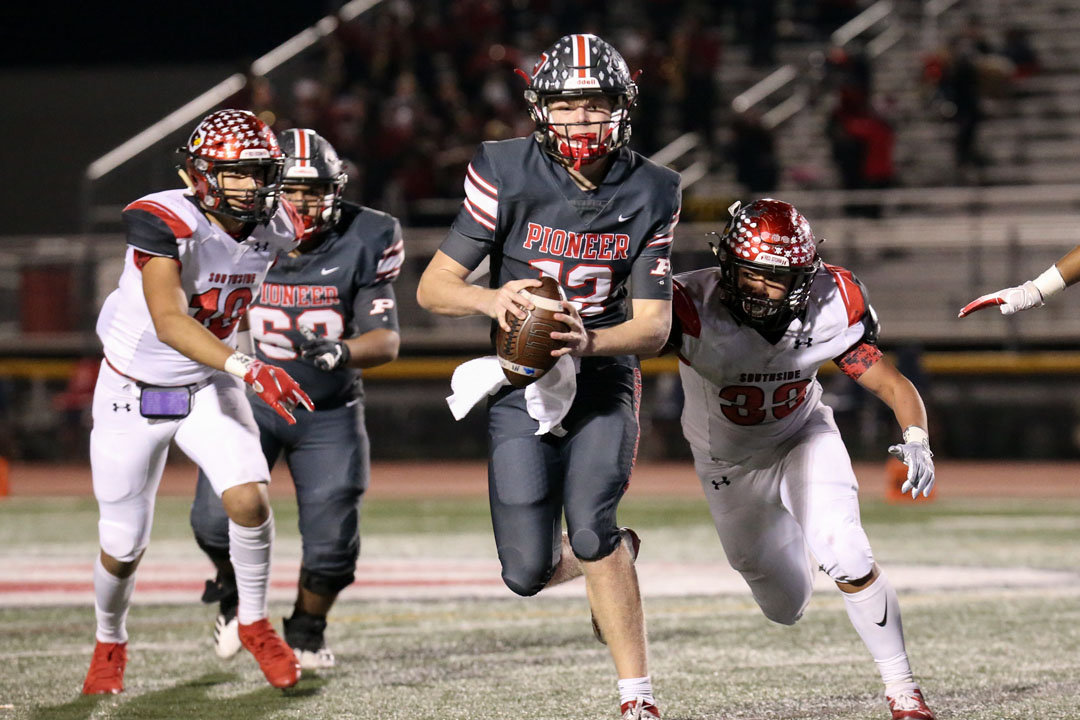 While Marburger’s magic has been on full display all season long, it wasn’t exactly a magical carpet ride for the six-foot-three, 185 pound quarterback prior to this season. As a matter of fact, you could very easily say that Marburger’s first two seasons as the Diamondbacks’ signal caller were anything but magical; case in point his freshman season. That was when Marburger got his first taste of playing with the big boys. He played in two games that season and completed only three of 13 pass attempts for 60 yards, one interception and no touchdowns. As a result, he finished his freshman season with a quarterback rating of 14.3.

As a sophomore Marburger was given an opportunity to platoon at the quarterback position with senior Jacob Rosales. As it turns out, that was when he started showing flashes of what he could do on the field when given a chance. He played in all 11 of the Diamondbacks’ games, completed 78 passes on 142 pass attempts for 1,036 yards, nine touchdowns and four interceptions. His quarterback rating at the completion of the 2018 season was a much improved but not quite magical 87.6.

While a lot of quarterbacks would’ve been thrilled to have the kind of success Marburger had as a sophomore, he himself thought it left a lot to be desired.

“I was not at all satisfied,” Marburger said. “I would’ve liked to have performed a lot better. I had Jacob (Rosales) ahead of me and I am very thankful for that because he taught me a lot of things.”

When asked why he decided to split the quarterback duties between Marburger and Rosales instead of just letting the more experienced senior take the reins of the offense all by himself, Pioneer head football coach Tommy Lee said, “When you’re trying to build your entire program and when you have two high quality quarterbacks you want to give them as many reps as possible during the non-district season. I think it was valuable for Eddie to throw for 1,000 yards as a sophomore. He even played some defense for us that season. I think that all those things helped Eddie be a little bit calmer and made it a little bit easier for him to be the starter for us this year as a junior.”

Marburger’s success last season, in addition to his success leading the Pioneer 7-On-7 team to the state tournament, gave Lee enough confidence in him to make him the starter going into this season. And when you look at what Marburger has accomplished thus far this season, you will see that Lee’s confidence was well placed.

Lee also credits the fact that the Diamondbacks did not play spring ball as one more factor that helped prepare Marburger for this season.

“That gave us an opportunity to concentrate on him developing chemistry with his receiving corps,” Lee said. “And I think that was a bonus for us. As you can tell, he’s leading the Valley in passing and I believe he’s one of the top quarterbacks in the state of Texas in 5A. All those things have been valuable for him to help him gel with his receivers.”

As impressive as Marburger’s play was through the Diamondbacks’ non-district and District 16-5A-II schedules, the fact that he played one of the best games of his career last week, in what turned out to be the Diamondbacks’ first playoff game victory in school history, is even more impressive. In that bi-district round playoff game against San Antonio Southside, Marburger completed 19 0f 23 pass attempts for 328 yards, three touchdowns and no interceptions. His completion percentage of 82.6% and his near perfect quarterback rating of 162.6 are the kind of numbers that few high school quarterbacks across the state of Texas ever come anywhere close to attaining.

So what does his monster game against Southside say about Marburger and his ability to step up his game when necessary?

“It says that he’s a gamer,” Lee said. “We asked all of our kids here to step their game up. We were going up against a really great team in Southside; a team that has been very successful in their district this year so for him it was just a new challenge. And you talk about stepping up, he stepped up big time!”

As talented as Marburger is, he like every successful quarterback cannot succeed without the support of his teammates. And after acknowledging his faith in Jesus Christ as his Lord and Savior, Marburger credited his offensive line and receivers for making it possible for him to have the success he’s had this season.

“My o-line makes everything happen,” Marburger said. “And I probably have the best wide receiving crew the Valley’s ever had.”

In addition to all of his individual success, the Diamondbacks as a team have had a remarkably successful season. Not only did they win their first playoff game in school history, but they also claimed their first ever outright district championship and they had their first undefeated district season.

When asked what he attributes all of this team success to, Marburger said, “I attribute it to all the hard work we put in during the off season. It has really shown up. And it goes to show what hard work can do for you.”

While the Diamondbacks as a team have scored an average of just over 50 points per game this season, Marburger is quick to credit the defense for the part it’s played in such a successful season.

“Those guys are the most underrated defense in the Valley for sure,” Marburger said. “People don’t realize that what allows us to score so quickly is the way the defense gets the ball back to us. That’s how we’ve been able to score so many points. It may not look as if they have great stats because we score so quickly that they’re always on the field.”

Tonight, Marburger and the Diamondbacks will be going up against the 9-2 Pflugerville Weiss Wolves at Cabaniss Stadium in Corpus Christi. The Wolves’ defense has given up only 141 points all season. That’s an average of less than 13 points per game. So if the Pioneer offense is going to score anywhere near the 50 or so points that they have been scoring up to this point in the season, it’s going to take an extra dose or two of the Marburger magic that’s been lighting up scoreboards across south Texas all season long.