The Sharyland Pioneer Diamondbacks made history last week, winning their tenth straight game and more importantly, their first post season game ever. The 59-14 victory over San Antonio Southside advanced the Diamondbacks to the area round of the 2019 UIL 5A Div. II playoffs and a match-up with Pflugerville Weiss tonight.

Kickoff is scheduled for 7:30 pm at Cabaniss Field in Corpus Christi. 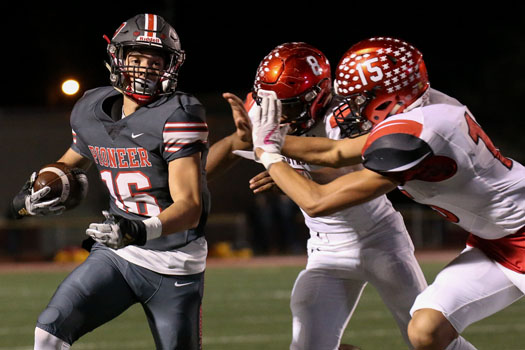 Those are just a couple of the new experiences awaiting the District 16-5A Div. II champions who have answered just about every challenge thrown at them this season.

Pioneer has most often answered those challenges by throwing it right back at the other team. That’s throwing the ball back . . . something the Diamondbacks are very good at.

Junior quarterback Eddie Lee Marburger continued his assault on opposing defenses last week in the victory over Southside, passing for 328 yards and three touchdowns and scoring three times himself on 156 yards rushing. The rushing total was his highest of the year and the three scoring passes gave him 52 for the year, a new single season Valley record.

This is not, however, a one man team. The Diamondbacks have an outstanding corps of receivers for Marburger to choose from whenever he steps back to pass. Seniors Lavar Lindo, Evan Maldonado and Luke Padilla were the recipients of Marburger’s three scoring passes last week and each have had big years too. Padilla leads the team with 47 receptions for 804 yards and 16 touchdown catches. Lindo has caught 34 passes with eleven going for scores, and Maldonado has 26 catches for three scores.

The four players also have something that might come in handy tonight. All of them have playoff experience in second round games from other sports. Marburger , Padilla and Lindo got to the area round as members of the Diamondbacks basketball team last season and Maldonado was a big part of Pioneer’s historic run to the state baseball tournament last spring.

How will having that experience help tonight?

Padilla didn’t think there was a difference between the types of games but agreed with Lindo about what was needed. “When game time comes everyone has to be level headed and ready to go.”

Tonight’s opponent will also be faced with handling a new environment. Weiss’ 24-14 victory over Lockhart last week was their first playoff victory in the program’s brief history and improved the Wolves to 9-2 on the year after going 0-10 in 2018.

“They’re a good team,” said Pioneer Coach Tom Lee. “(They) have a lot of speed on both offense and defense. They are an up and coming program. We’re going to have our hands full, but we have athletes and speed too. I think it’s going to be a great match-up between two good football teams.”

Something the Diamondbacks have going for them is that win over Southside last week. The brackets in the 5A football playoffs are set up in a way that teams from the Valley are matched up with teams from the Coastal Bend and beyond much earlier than the local 6A teams. Past history has not been kind to the Valley when these matchups occur but things could be changing. Pioneer’s sister school, Sharyland High, advanced past a San Antonio area school last year in the playoffs and Mission Veterans went four rounds deep.

Participation in 7 on 7 tournaments over the summer could be helping. This past summer the Pioneer 7 on 7 team qualified for the state tournament and beat three 6A schools from other parts of the state, all who qualified for the 2019 playoffs. The wins and that experience have helped Pioneer get where they are.

“It definitely got us a lot better,” said Marburger. “It helped us in a big way.”

Coach Lee felt the same way. “For us it was a big thing. We played three really good football teams. The competition for us is what is going to make us better now; we’re seeing better athletes at a different level.”

Lee also emphasized that in order to be successful his team still needed to do all of the other things that go into winning a football game. “We still have to tackle, run and block.”

They also have to quickly move on from last week’s history making win and Lee is not letting his team relax on that.

“We are under the mentality of win or go home,” he said. “We don’t want to end it right now. We tell our seniors this could be your last Monday or last Tuesday. We don’t want it to be.”

My own observations have convinced me the team is not ready to end it either. The players I spoke with at practice were relaxed and confident. They were the same as I observed them being interviewed by a local TV reporter. Perhaps most important was the way I saw them celebrate that Southside win last Friday night. Or should I say the way they didn’t celebrate.

After the win the players attentively gathered around Coach Lee as he spoke to them about getting ready for their next game. They proceed to shake hands with the long line of family and friends waiting to congratulate them along the stadium fence line and then quietly got on their buses to head back to school; ready to get ready for tonight.