Officers arrested an Agua Special Utility District employee last week after he fell asleep behind the wheel of a government-owned truck while smoking synthetic marijuana, according to court records.

Palmhurst police Officer Rene Vela arrested Abraham Lopez Jr., 44, of Mission on Nov. 11, when he fell asleep behind the wheel and suddenly stopped on the 1000 block of East 3 Mile Line. 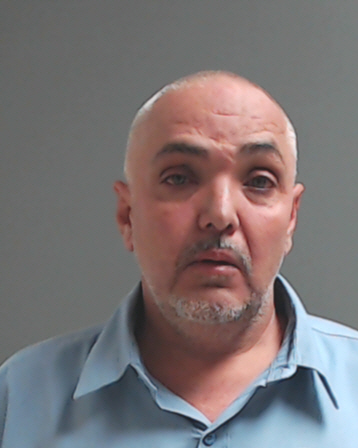 Lopez is charged with driving while intoxicated-third offense or more, a third-degree felony.

Officers booked Lopez at the Hidalgo County jail on Nov. 12. He remained in jail on Nov. 20 and couldn’t be reached for comment.

The incident that resulted in Lopez’s arrest started at 10:57 a.m. on Veterans Day, when Officer Vela approached the intersection of East 3 Mile Line and Mayberry Road.

“Officer Vela observed the traffic light turn green indicating for traffic to proceed,” according to court records. “Officer Vela then heard a vehicle behind a white in color pickup truck honk their car horn in an attempt to get the driver of the pickup truck’s attention to move forward.”

The driver swerved, changed lanes without signaling and started driving in the center of East 3 Mile Line — occupying two lanes at once.

Officer Vela honked at the truck, activated his emergency lights and turned on his siren, attempting to stop the truck.

The truck slowed to 12 mph before stopping on the 1000 block of East 3 Mile Line.

Officer Vela approached the truck and attempted to speak with Lopez, who had fallen asleep behind the wheel. When he didn’t respond, Officer Vela opened the door and placed the truck in park.

“Officer Vela then removed the marijuana cigarette from Mr. Lopez’s right hand,” according to court records.

Lopez had ash on his pants and a “baggy containing a green leafy substance,” according to court records. Officers recognized the substance as synthetic marijuana.

“After approximately 10 minutes Mr. Lopez began to be more responsive by answering simple questions,” according to court records.

“Officer Vela then asked Mr. Lopez if he knew what day it was to which he stated yes,” according to court records, “and continued to state that it was Sunday.”

Hidalgo County jail records identify Lopez’s employer as “AGUA S.U.D.” and his occupation as “SHIPPING AND RECEIVING.” Salary data released by the utility district in January listed Lopez as a warehouse clerk.

Whether or not Lopez is still employed remains unclear.

Why the utility district hired Lopez and allowed him to drive a government-owned vehicle, though, may become a bigger question.

Lopez had two prior drunken driving convictions, according to Hidalgo County court records. He also pleaded guilty to possession of 5 to 50 pounds of marijuana, a third-degree felony, in January 2010.