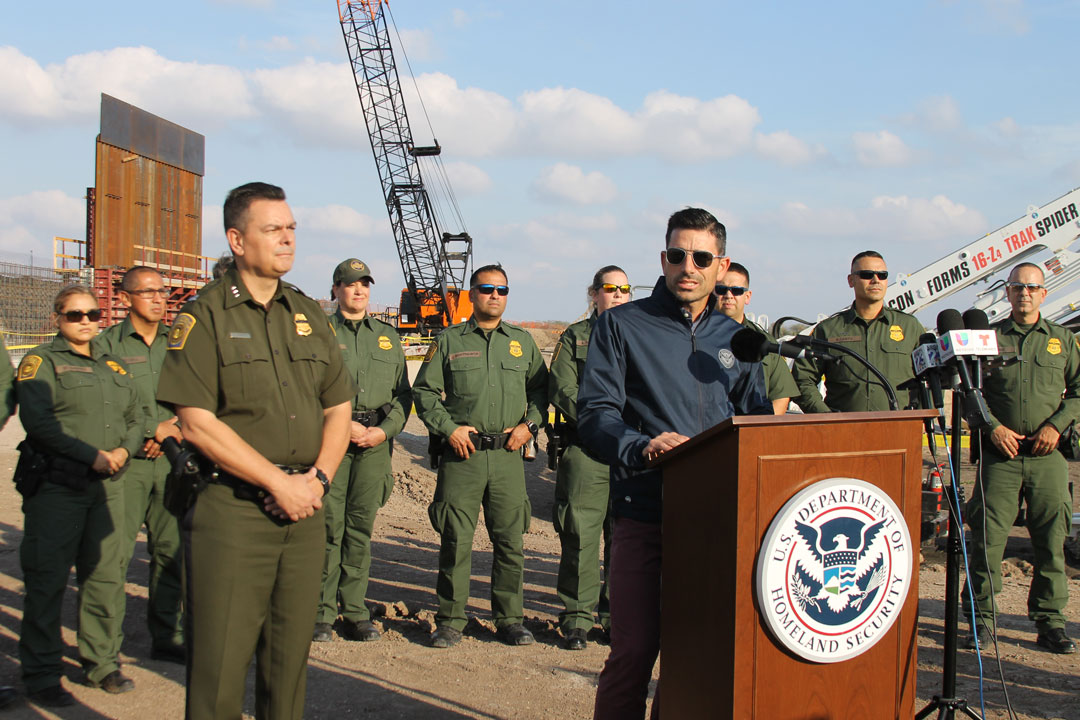 “The RGV is ground zero for the security of the humanitarian crisis at the border,&rdquo; Wolf said. “In fiscal year 2019, the RGV Sector apprehended over 339,000 illegal aliens.&rdquo;

“To put that in perspective, this one sector accounted for approximately one-third of the total 1.1 million aliens apprehended across the entire southwest border for FY [Fiscal Year] ‘19,&rdquo; Wolf said. “I&rsquo;m here to say things have changed, thanks to the decisive action by the president and the department.&rdquo;

Wolf added that across the border, enforcement actions have dropped by over 70 percent “since the peak of the crisis in April and May&rdquo; this year. He said this is due to several initiatives.

“We must secure the border. The U.S. will no longer allow smugglers and drug traffickers to walk across the border unimpeded,&rdquo; Wolf said. “President Trump has been clear: to do this we will build a wall, and he is following through on his promise.&rdquo;

Wolf noted that 83 miles of “new border wall&rdquo; have been completed, and the government is on track to build 450 to 500 miles of new wall by the end of 2020.

“Of that total, 110 total miles will be constructed here in the RGV Sector,&rdquo; Wolf said. “We have funded and built more wall in the first three years of this administration than the entire eight years of the previous administration.&rdquo;

Wolf said the wall is not just physical infrastructure, but a “high-tech border wall system&rdquo; that combines a physical barrier with tactical lighting, fiber-optic technology and real-time surveillance.

“Simply put, walls work,&rdquo; Wolf said. “We&rsquo;ve seen this over and over: when we construct a wall, the illegal activity goes down. We saw it in the 1990&rsquo;s in San Diego, we&rsquo;re seeing it today in El Paso.&rdquo;

Wolf said that no one disputes giving the military “the best equipment&rdquo; to keep them and this country safe, and asked why things should be any different for the men and women of the Border Patrol who are “protecting our homeland.&rdquo;

“What we&rsquo;ve heard time and time again from our operators is that we need a wall,&rdquo; Wolf said. “A new wall system is a game changer for stopping illicit activity, including activity carried out by transnational criminal organizations, or TCOs.&rdquo;

He added there has been “unprecedented&rdquo; enforcement actions on the Mexican side of the border as well, saying that thousands of Mexican troops have been deployed to stop illegal crossing and enforce border security. Wolf brought up Migrant Protection Protocols (MPP) that have “changed the dynamic&rdquo; on the border. DHS is using the program to end catch and release and mitigate the humanitarian crisis at the border.

The Mexican government is also providing “shelter, clothing, food and security protections&rdquo; to migrants under MPP. The International Organization of Migration will provide transportation for those who are not from Mexico but wish to return home.

“We continue to see month-to-month declines in border apprehensions,&rdquo; Wolf said. “Our mission is clear, our strategy is working. Together, we will secure the border, and we will secure our homeland.&rdquo;