The Boerne Champion Chargers survived a wild comeback by the Sharyland Pioneer Diamondbacks to win the Region IV 5A Div. II semi-final 45-38 in overtime Saturday afternoon at the Alamodome in San Antonio.

Trailing 38-23 going into the fourth quarter Pioneer scored 15 unanswered points and got a strong defensive effort to get the game into extra time. 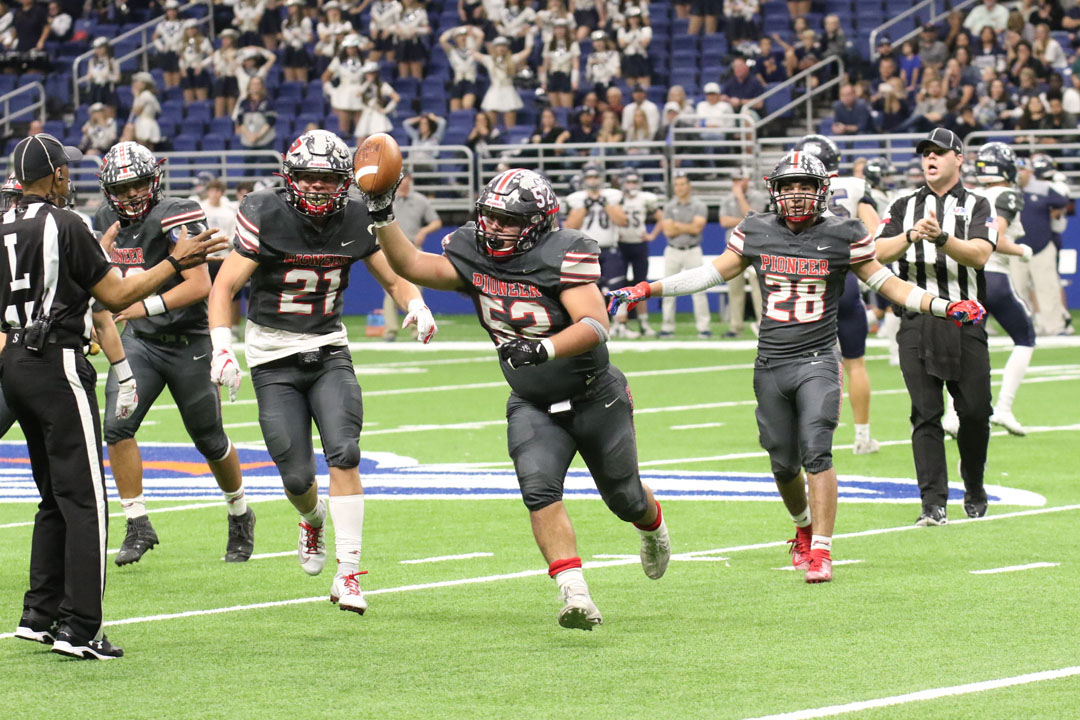 Champion scored first in the extra period and needing just a yard to keep their own drive alive, the Diamondbacks were stopped short to give the win to Champion.

The Chargers led by 15 on three different occasions but Pioneer never wavered. The Diamondbacks scored on their first possession of the second half to cut a 24-9 halftime deficit to 24-16 That began a wild third quarter where each team scored two touchdowns but also turned it over once each.

As has been the case for most of the season the offense was led by junior quarterback Eddie Lee Marburger, who threw for two scores and ran for three more. Trailing 14-3 in the second quarter Marburger found Lavar Lindo down the sideline for a 91 yard score and hit Evan Maldonado for a 25 yard touchdown early in the third quarter that began the Diamondbacks comeback. Pioneer scored 29 points in the second half to get back in the game.

The fourth quarter was all Pioneer. The defense got two three and outs and an interception by Erik Torres to help fuel the comeback. The offense responded with two scores but came up empty on two other possessions in Boerne territory.

Marburger’s two yard rushing touchdown on the first play of the fourth quarter cut the deficit to 38-30 and his one yard touchdown run got the Diamondbacks to 38-36. A Luke Padilla pass to Allen Davila on a two point conversion tied it up with 6:57 left in the game. Davila would end the night with 12 receptions. Neither team would score for the remainder of regulation. The Diamondbacks were stopped on fourth down after the Torres interception and their last possession of regulation was ended by a spectacular interception from a Boerne defender that forced overtime.

Coach Tom Lee spoke about the gutsy effort from his entire team.

“It wasn’t a lack of effort either offensively or defensively. Our kids came to play and I think that we proved a lot of people wrong up here. “

Lee also had kind words for the Pioneer players who came before this season.

“It goes back to the first four years, those kids that put the blood and sweat in at Pioneer. I can’t thank them enough for what they’ve done to establish where we are at today. It’s just been an accumulation of some good kids. I’m hoping this is only the beginning for Pioneer. I think we opened up the eyes of some people and we got a great group coming back.”