After competing on the Sharyland Rattlers softball team, a Sharyland High School senior has signed on to compete for the East Texas Baptist University Tigers.

Tristen Maddox signed to participate in softball for East Texas Baptist University at a Tuesday ceremony. The university is, an NCAA Division III school located in Marshall, Texas. The Lady Tigers compete in the American Southwest Conference won their 9 ASC Tournament Championship last May and finished their season with a 39-6 record. 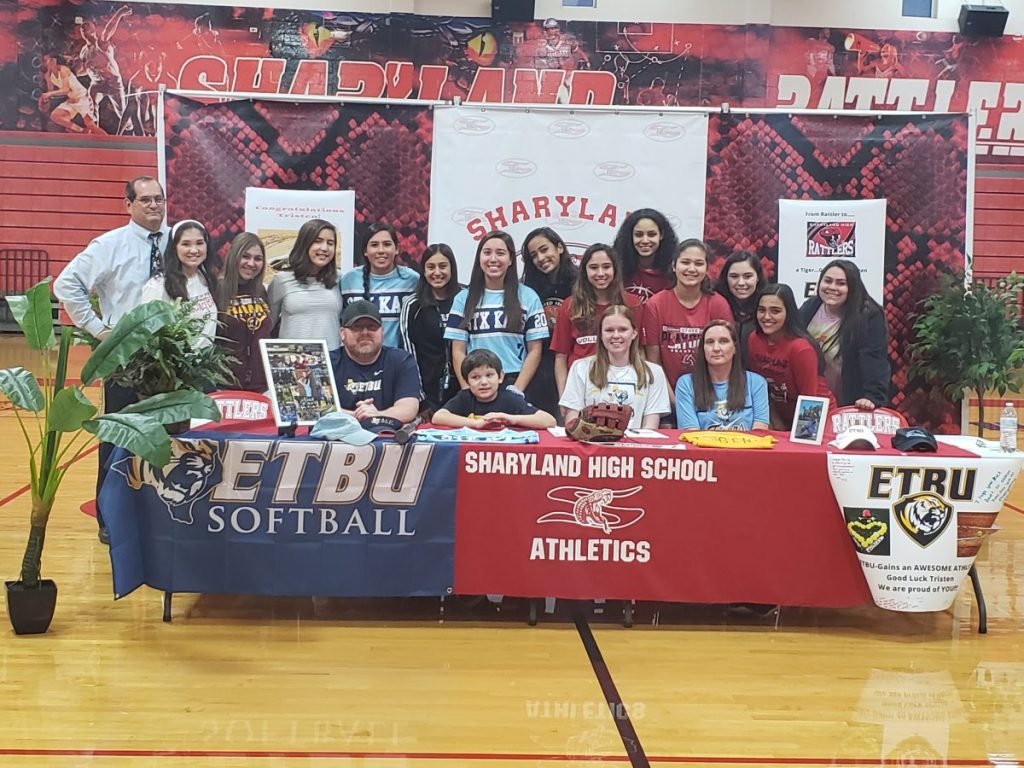 “They have a good softball program and a kinesiology program that I want to study,” Maddox explained. “Playing softball in college is a dream come true, I’ve been wanting to do this since I was young and it makes me happy to be here doing it. My mom played when she was my age and she got a college scholarship but decided not to play. I hope I’m making her proud.”

Maddox’s mom, Nikki, was at the signing and reflected on her own past as a volleyball player in college where she was offered an athletic scholarship but declined it to be closer to home and join the United States Marine Corps.

“Tristen playing softball in college is amazing, she’s surpassed anything I’ve ever dreamed off and I am glad she’s got the opportunity and to push her forward and get her an education while she plays,” Nikki said. “It’s been a lot of work to get there but it’s been worth it to watch her do something she loves and learn what hard work is.”

Maddox’s softball coach, Paul Cruz, praised her skills and said she’s one of the top players in the district.

“Offensively and defensively, she is sound. She will be an impact player, she moves so quickly and be one of the better hitters on the team. She’s ready to start the first year, that’s how good she is. She’s always been a great role player and an equally great role model for her teammates and I wish her the best.”

“We knew volleyball would always be her second sport, but if you watched her play you wouldn’t be able to tell. That’s how dedicated she was,” Castillo said. “She’s a hard worker and naturally talented and brought the best out of everyone and gave 100 percent without being asked because it came regularly for her.”