The 2019-20 high school wrestling season started just a few weeks ago and the Huskies of Juarez-Lincoln appear to be doing what they did last year: win. The defending champs from District 15-6A have already won two outright tournament titles and tied for another this year.

Their latest success came this past weekend at the Sharyland Rattler/Lady Rattler Invitational held at Sharyland High School. The two-day tournament drew in wrestlers from 16 different schools competing in 24 weight divisions (14 for boys and 10 for girls). 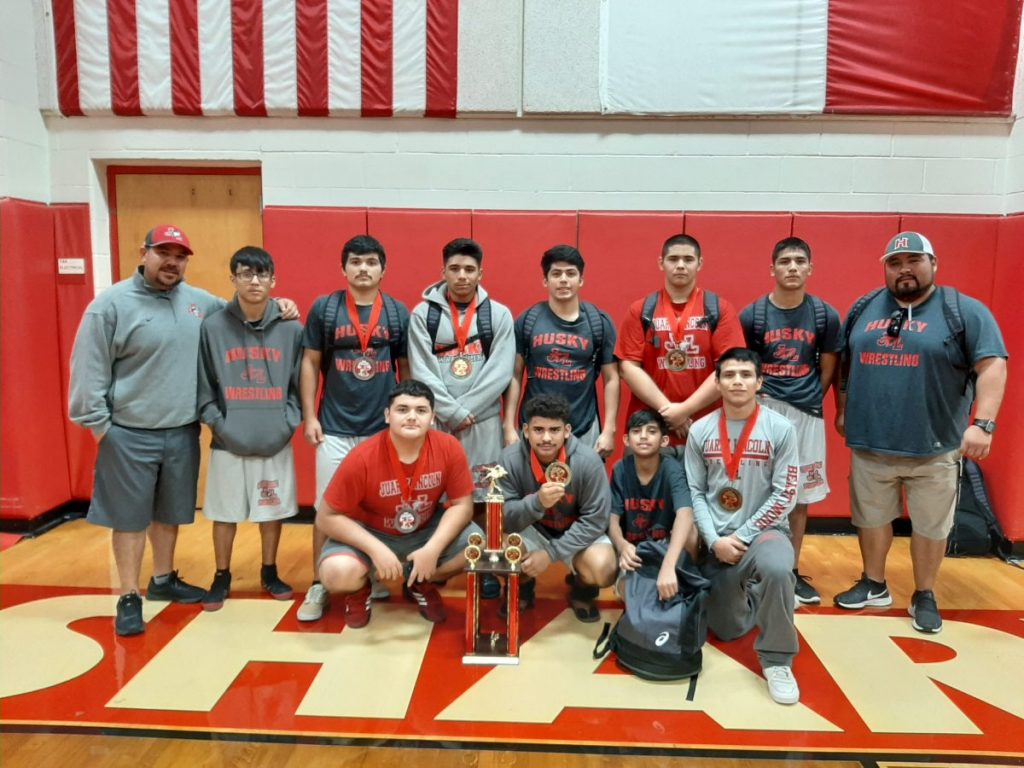 The Huskies sent five wrestlers to the championship round and came away with four first place finishes to beat second place La Joya 153.5 to 108. In addition to the four gold medals for placing first, the Huskies also earned one silver and one bronze medal on the day. The Huskies also led all teams in falls for the weekend, recording a total of 17 over the two days.

A total of five boys and five girls’ teams from the Big 7 participated in the tournament with a total of nine individuals bringing home gold medals. Another eight won silver and twelve won bronze.

“We’re just proud of our kids, day in and day out,” said Juarez-Lincoln boys coach Armando Resendez. “We just thank God that they’ve been healthy for the first three tournaments. We like the competition right now.”

Jose Cerda (132 lbs.), Willi Bonilla (195 lbs.) and Mario Tijerina (285 lbs.) were all part of last year’s team and all placed first in the tournament. The victories keep both Cerda and Bonilla undefeated on the season.  Manuel Torres (182 lbs.) was the fourth first place finisher of the tournament for the Huskies.

Bonilla recorded three falls on his path to the championship. “This weekend went great,” he said. “I’m ready for a great season.”

La Joya’s Michael De La Cruz continued his undefeated season too, winning the 152 lb. division with a fall in the third period after a tough 9-7 semi-final victory over Juarez’s Abelardo Gloria.

“It was pretty good competition,” said De La Cruz. “My championship match and semi-final match were really good competitions; something that I really needed. No disrespect to anybody I just wanted to wrestle hard. I just come to wrestle and have fun.”

The Huskies Adrian Hernandez (285 lbs.) was the fifth member of the team to make it to the finals. Other finalists from the Big 7 in the boys division were Sharyland High’s Alberto Mendoza (106 lbs.) and Daniel Hernandez (220 lbs.) along with Kenneth Briere (126 lbs.) from Sharyland Pioneer and Joseph Zieske (138 lbs.) from La Joya Palmview.

Pioneer’s second place finish in the girl’s division was, all things considered, quite an accomplishment. The Lady Diamondbacks only entered five wrestlers in the ten divisions but had four reach the finals and recorded a total of twelve falls over the weekend to keep Pioneer in a battle with PSJA for the team title. The Lady Bears edged out Pioneer 100 to 97.5.

Despite the setback Lady Diamondbacks Coach Ricard Eckley remained positive about both the weekend and the season going forward.

“It showed the effort they put into it. It’s good to see these results, especially the two freshmen. It was their first time wrestling girls older than them, so there’s a little bit of shell shock but they overcame it and they learned the toughness it takes to really succeed at this level.”

The two freshmen that Eckley referred to were Joanna Alvarez (128 lbs.) and Vanessa Ramirez (138 lbs.), who each reached the finals of the tournament before losing. Juniors Dani Roman (148 lbs.) and Camila Flores (215 lbs.) each recorded falls in their finals matches to claim gold for Pioneer.  Each wrestler remains undefeated on the year.

Roman summed up both her own and the Lady Diamondbacks efforts. “It went pretty well,” she said. “The girls were good.”

Two other Big 7 wrestlers also had success in the girl’s tournament. Sharyland High’s Jerilyn Peralez won the 95 lb. weight class by recording falls in both her semi-final and final matches and La Joya Palmview’s Judith Rivas took the 165 lb. division by defeating Jessica Aldama from Juarez-Lincoln in the finals. She recorded falls in all four of her matches. Both Peralez and Rivas have now won multiple tournaments this season. Both remain unbeaten.

Peralez talked about what it takes to be successful on the mat. “Practice every day.  It’s hard work all the time; pushing my limits and trying to do my best.”

Rivas summed up her weekend “It was hard work . . . but it feels good to win.”

Juarez-Lincoln looks to continue their winning ways at their own tournament on Thursday December 19 at Juarez-Lincoln High School. Matches are scheduled to begin at approximately 9 am.