The Sharyland Pioneer Diamondbacks used four quarters of defense and one big quarter from Miguel Angel Gonzalez to rout the Mission Eagles 66-36 this past Tuesday at Pioneer High School in an early season non-district boys’ basketball match-up between Big 7 schools.

Both the Diamondbacks and Eagles enter 2019-20 with hopes of returning to the playoffs and with plenty of players back from their squads that helped them get there last year. Mission was the fourth place team out of District 30-6A last season while Pioneer was the District 31-5A champion. 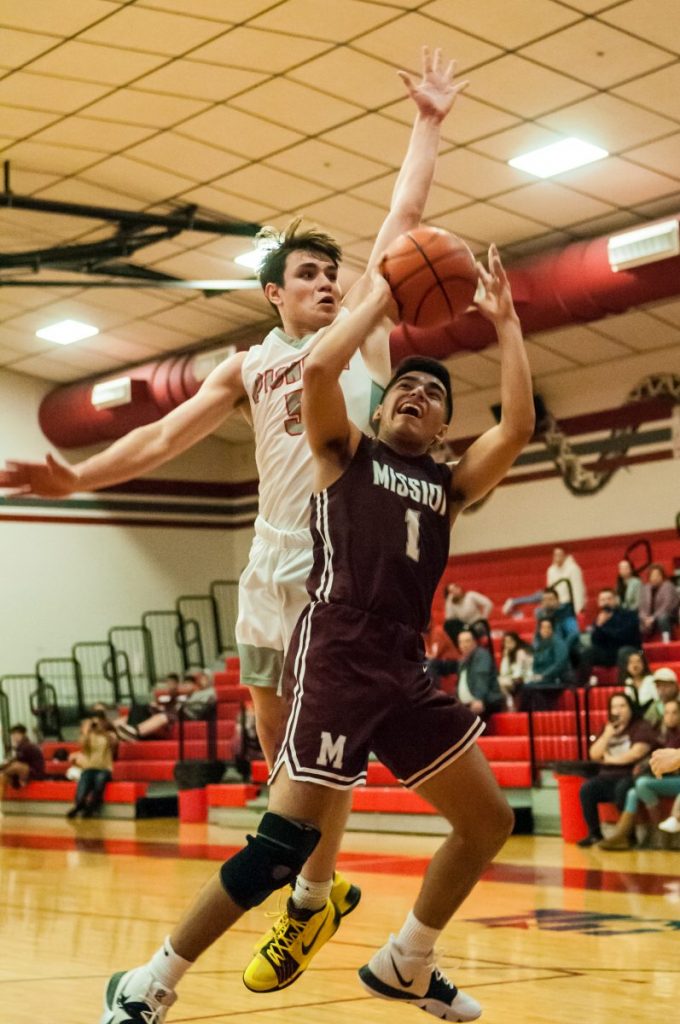 Mission’s Eddie Rivero prepares to take a shot as Pioneer’s Miguel Angel Gonzalez goes for the block during the first half of the Diamondbacks’ 66-36 non-district game win over the Eagles Tuesday, Dec. 10, 2019. Progress Times photo by Luciano Guerra.

Both teams came out aggressively at the start and, with talented athletes on both sides, the result was a choppy first quarter where neither side mustered much offense. Pioneer led 8-4 early behind a three pointer from Luke Padilla and two baskets from Marcus Trevino before the Eagles ran off six straight using two baskets from Jahel Salinas and a lay –up from Eddie Rivero to give the Eagles a 10-8 lead.

That lead didn’t last too long however, as the Diamondbacks closed out the quarter with an Ethan Lee layup to put Pioneer up 11-10 at the end of the first.

Pioneer would lead the rest of the way, taking control in the second with a huge quarter from Gonzalez. The junior pumped in 19 points with five three pointers, another basket and two free throws as the Diamondbacks outscored the Eagles 27-9. Gonzalez’s final three, going in as time expired, put the Diamondbacks up 38-19 at the half.

“My teammates found me and that just got me hot,” said Gonzalez. “I hit one and I knew I felt good. My teammates kept finding me. I couldn’t do it without them.” Gonzalez finished the night as the game’s leading scorer with 21.

Pioneer Coach Rene Gonzalez noted how Gonzalez’s big second quarter changed the game. “Awesome, awesome. It’s a tight game in the first quarter. He’s (Gonzalez) a great shooter and an awesome kid. He had the hot hand and kids were looking for him. That made a lot of difference.”

The defensive effort from the Diamondbacks was a big part of the second quarter too, as Mission only managed two baskets the entire quarter. The struggles for the Eagles’ offense continued into the second half as well. Mission was held scoreless for the first four minutes of the third quarter, managing only two baskets again.

The offense for the Diamondbacks got going again in the fourth quarter, this time with seven different players contributing points in the period to extend the Diamondbacks twenty point lead at the end of the third to its final margin. The defensive effort continued as well. The Eagles managed only 17 points in the second half.

Coach Gonazlez added that the defensive effort was improving as a number of football players return to the team.

Three of those players made significant contributions to the effort against the Eagles. Lee and Lavar Lindo contributed ten points apiece and Padilla finished with eight. Lee was all over the court defensively and his hustle in transition contributed to some easy baskets for the Diamondbacks. Lindo was big on the defensive end with his rebounding and on the offensive end; creating problems for the Eagles trying to defend him.

“We couldn’t score, we couldn’t put the ball in the hole,” said Mission Coach Rico Martinez. “They (Pioneer) played well, they shot well. They were the better team tonight.” Rivero led the Eagles with 12 points on the night.

The loss evens out Mission’s record to 6-6 on the season with one more tournament and four non-district games left before the Eagles open district play on January 3 on the road against McAllen Memorial.

Pioneer improved to 3-4 on the year and has two tournaments and two non-district games left before beginning another run at a district title on January 3 with a game at Sharyland High.

Both teams are entered in the PSJA ISD tournament that began play yesterday.