Despite an energetic individual, it’s hard for people like Viva Lopez to have fun at any park.

“Whenever she’d go to the park, other kids would stare at her and she’d cry because of it,” her mother, Mary Jane Lopez, explained. “And she gets scared because of it and sometimes even gets stuck on some of the jungle gym equipment and I have to get her down.” 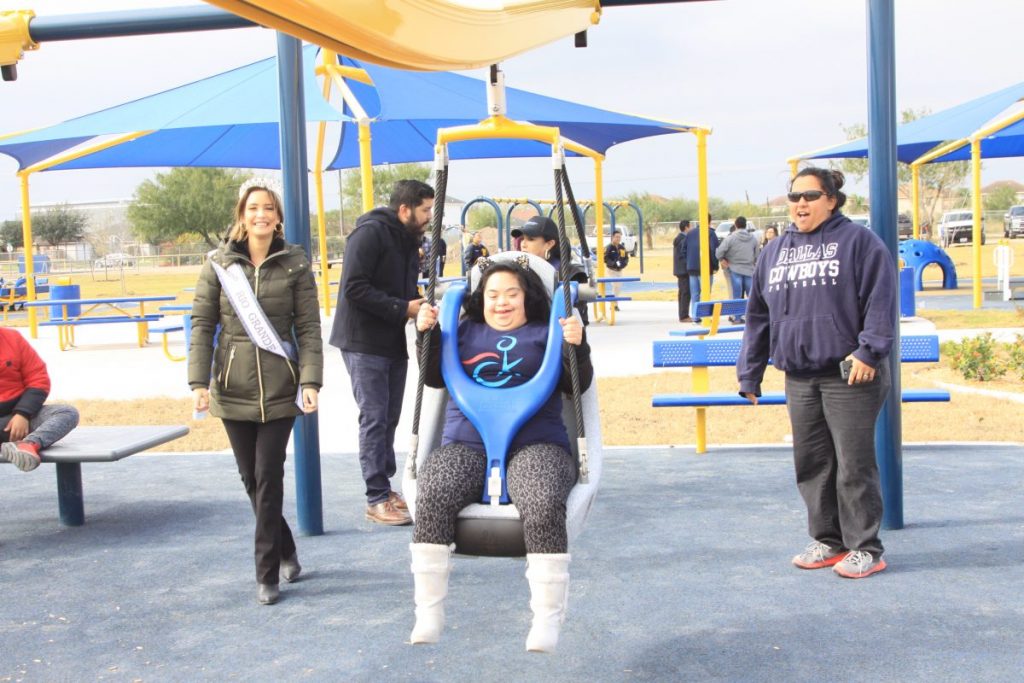 Viva Lopez riding the zipline harness swing at the all-inclusive park located in the city of Hidalgo during its grand opening ceremony.
Progress Times photo by Jose De Leon III.

Viva has down syndrome, Mary Jane said, but that doesn’t stop her daughter from finding ways to be active. She is a member of the cheerleading squad for the advocacy group Capable Kids Foundation and for the RGV Vipers’ Venom Hype Squad.

Now, Viva and other kids like her have a park to call their own.

On Wednesday, Viva and Mary Jane were at the grand opening of the city of Hidalgo’s $1 million all-inclusive park, the first of its kind for the county. They joined 40 other Capable Kids members as well as public officials in attendance

“We’re always looking for places for our special needs students outside the district when they go on field trips, so this is a place we will bring them to on a monthly basis,” Valley View ISD Superintendent Rolando Ramirez explained, adding that the school district donated the land to Hidalgo County Precinct 2 to make plans for the park a reality. “Our community has only one other park nearby and that’s it. This is within walking distance from a lot of houses and apartments here so it’s perfect for parents as well and accessible to the community.”

The park will be open to the public Monday through Friday from 5 p.m. to 9 p.m. with weekend hours still pending. The park was designed by Capable Kids Foundation who decorated it in Valley View ISD’s signature blue and yellow while the precinct built and paid for the $1 million park and a parking lot to accommodate it, Hidalgo County Precinct 2 Chairman Eduardo “Eddie” Cantu said.

“We’re knocking barriers down today that not all of us, including myself, knew existed,” Cantu said. “Parks are not automatically inclusive, but this one is.”

According to Melanie Watson, board president for Capable Kids Foundation, creating an all-inclusive park in the county is something the non-profit organization has been trying to create since they came into existence five years ago due to many parks being inaccessible to kids with mobility issues.

“We know kids who are adults now who have never played on a playground, they had to sit indoors looking at their friends play,” Watson said. “This is the largest park of its kind south of San Antonio and it is extremely important because playgrounds need to include all children and it allows different children to grow up besides each other and learn that differences don’t matter, kids are kids and will always want to play.”

Capable Kids is in preliminary discussions with other city leaders to bring similar parks to other cities, Watson added.

“This opening will spark a movement for more inclusive parks,” Watson said. “As therapists, we know a child’s inability to participate can drastically change when we are creative and willing to make changes to our environment to include them. Our world may not be currently built for those who have mobility challenges or differences, but it is our job to make sure they are included and celebrated.”

As Precinct 2 Chairman, “Eddie” Cantu oversees the cities of San Juan, Pharr, Hidalgo and half of McAllen so the location of the park is centralized in his area. He announced that his office will soon break ground on a local Boys and Girls Club as another project to serve the community.

“We come and do what we need to do, and learn from great people, it’s our responsibility to the community,” Cantu explained. “Those great people include the kids with Capable Kids Foundation who teach us to look at their abilities, not their disabilities. These are kids with disabilities, not disabled kids, it’s a big difference, we have to see the kid first and see who they are instead of recognizing them by their labels.”